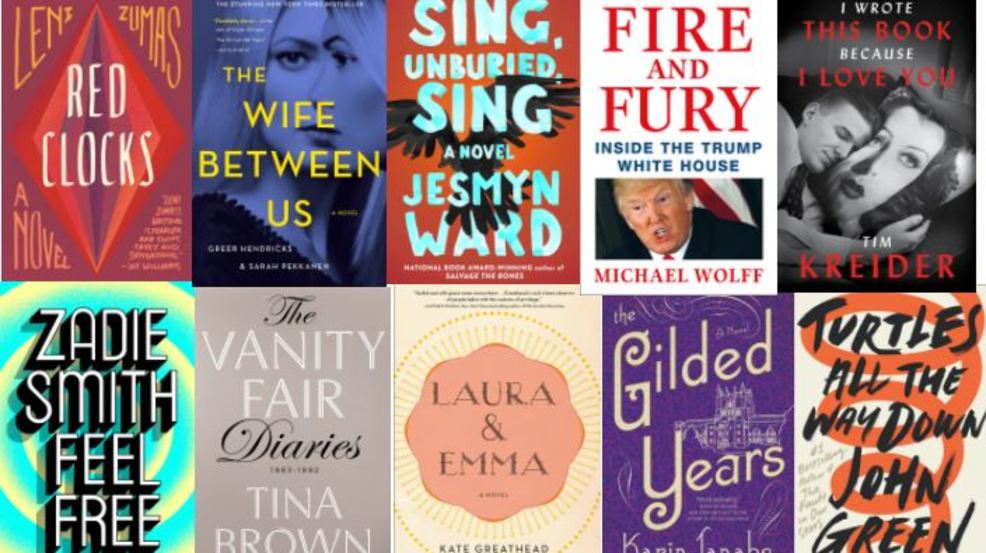 Guys can we all agree this winter has been weird! One day it's 60 and sunny and we're rocking short sleeves, and the next we are prepping for snowy morning commutes. Make up your mind already, weather!

But for those unmentionably cold days, we've nailed down a foolproof method of survival: cozy blankets, hot chocolate and books, books, books! Here are the 10 new(ish) releases we will be curling up with until these bipolar weather days are over!

The Story: Only in Washington would people line up in the freezing cold outside of a bookstore to await the midnight release of a political tell-all, am I right?? This book, which had a rush pub date after Trump threatened to sue both the author and publisher and sold more than a million copies in its first three days, details the behavior of President Trump and those surrounding him during the 2016 campaign and his first year in the White House, as observed by journalist Michael Wolff. Trump claims, however, that Wolff was never granted access to the White House and that he gave Wolff an interview for the book.

The Story: Confession time: I might be totally biased on this one because it involves my industry. But if you have any interest in journalism, strong women kicking a$$ in male dominated fields, salacious diary entries, or business success stories, check this one out. Tina Brown was barely 30 when she was tasked with saving Conde Nast's flailing flagship publication, Vanity Fair. Navigating life in a new country, and the rapid fire pace of New York media, Brown presents her most titillating daily diaries from her eight years as editor of the magazine. She spares no details either, from the story behind the naked Demi Moore cover we all remember to how she became Princess Di's confidante during the dissolution of her marriage, making the diary both an entertaining page turner and a must-read for anyone in the magazine world.

The Story: Yes, we have mentioned this novel before, but it deserves a re-mention because the novel -- penned by local girl Karin Tanabe -- was optioned by actresses Zendaya and Reese Witherspoon. The film, renamed "A White Lie, is based on Tanabe's "The Gilded Years," which tells the story of Anita Hemmings, the first African American to attend Vassar before black students were actually allowed in. Hemmings manages to pass for a white student until she's paired with a new roommate her senior year, a girl from a very well-to-do family, and her secret is threatened, showing just how far a woman will go in pursuit of an education. As in her previous two novels, Tanabe artfully creates dynamic characters whom you find yourself missing the moment the book ends. Make sure you pick this one up and give it a read before the movie

4. Turtles All the Way Down
Author: John Green
Publisher: Dutton (2017)

The Story: Green’s earlier novel, The Fault in Our Stars, was one of my favorite YA novels, and gave me all the feels -- I mean we are talking ugly crying here folks. Now he gives us a new story of 16-year-old best friends, Aza and Daisy, and I'm prepared to fall head over heels in love with these kiddos, just like I did with Hazel and Augustus.

5. The Wife Between Us
Author: Greer Hendricks and Sarah Pekkanen
Publisher: Holtzbrinck Publishers (2018)

The Story: Let's just say, assume nothing with this one. Or you will be wrong. From the publisher: "Twisted and deliciously chilling, The Wife Between Us exposes the secret complexities of an enviable marriage - and the dangerous truths we ignore in the name of love."

The Story: This was one of the most talked about books of the fall (it won the National Book Award for fiction), that I never got around to reading. But hey, isn't that what winter is for -- catching up? The first novel since her last National Book Award winner, Salvage the Bones, Ward once again examines the bonds of family, particularly imperfect families, as rthe reader follows 13-year-old JoJo through adolescence and his understanding of what it means to be a man.

7. I Wrote This Because I Love You
Author: Tim Kreider
Publisher: Simon & Schuster (2018)

The Story: With Valentine's Day looming, what better way to celebrate the day of love than by reading a collection of essays all centered on love from acclaimed essayist Tim Kreider. In "I Wrote This Because I Love You" Kreider explores his relationship with numerous women in his life, ranging from his mother to lovers, colleagues, students and friends, with great empathy, honesty, self-deprecation and wit. Kreider will be speaking in D.C. on February 8 at Politics and Prose at The Wharf.

The Story: If you loved Margaret Atwood's 1985 classic "The Handmaid's Tale" you've got to pick up a copy of this slightly terrifying futuristic tale set in Oregon in which criminalized abortion and a border wall are real life. The "Personhood Amendment" has been passed once again, making abortion and IVF illegal in America, granting a "constitutional right to life, liberty, and property to a fertilized egg at the moment of conception" and a pink wall runs along U.S. Canadian border to prevent women from seeking shelter from these new restrictive laws. Zumas' character-driven novel follows the lives of four ordinary women, which she separates into their own individual chapters, showing the reader how these new laws affect their everyday lives.

The Story: Zadie Smith's "Swing Time" was one of my favorite reads of 2017, so when I heard she had something new coming out, I immediately added it to my must-read list! Her latest is a collection of essays divided into five sections -- In the World, In the Audience, In the Gallery, On the Bookshelf, and Feel Free -- addressing globally relevant questions. Expect Smith's thoughts on everything from how we will explain to our granddaughters our failure to address global warming to what constitutes a well-run library.

The Story: I am a bit of a sucker for debut novels, especially when they are described as "tenderly intelligent and mirthfully incisive in its exploration of family, class, and the difficulty of reconciling our own natures with the way we nurture others." Upper East Sider Laura comes from old money and is aimlessly wandering through life in her early thirties when she meets Jefferson, and the two make a connection that will forever change her life. Enter daughter Emma, who she decides to raise as a single mother, with the support of a cast of eclectic characters, including her own uppity mother, her brother who is working through some daddy issues of his own, a very kind male pediatrician and her overbearing best friend. You have to wait a bit on this one as it won't be released until March 13, but trust us, it's worth the wait!