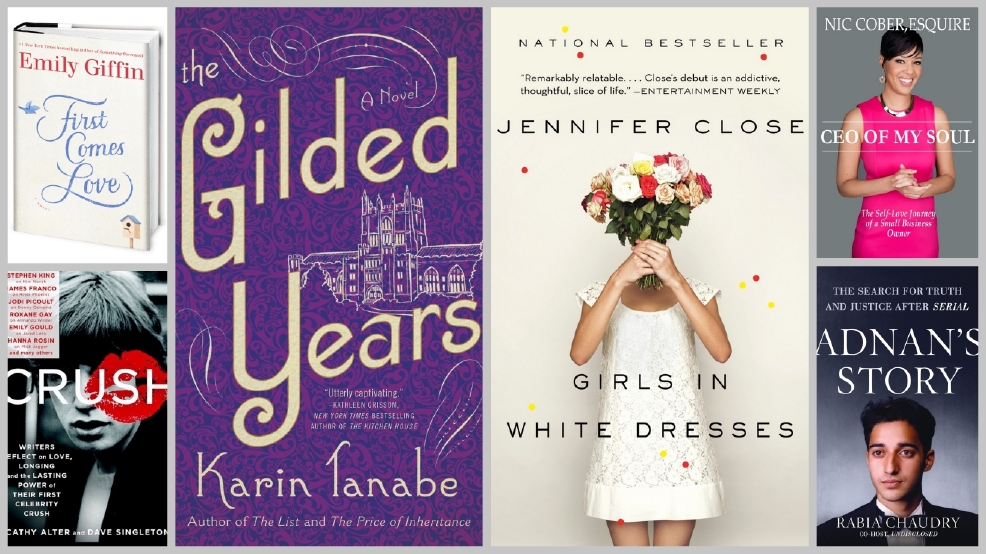 We've rounded up our 10 hottest reads to keep you chilling out all summer long. The majority are new releases of 2016, but we couldn't help ourselves and had to include a few oldies but goodies. Happy reading! (Each book cover image courtesy of publisher or author)I
SEE MORE

Get your book club on with these 10 hot summer reads

Folks, it is blazing hot outside. Like you're walking around with a permanent heat blanket on kind of hot. Where the mere idea of moving around and doing anything physical is exhausting and out of the question kind of hot. Which is all to say that it's the perfect time of year to plant yourself on the couch in front of an AC unit, on a lounge chair poolside, or with your butt in the water, toes in the sand (should you be so lucky) and do nothing but bask in literary goodness.

To help you out, we've rounded up our 10 hottest reads to keep you chilling out all summer long. The majority are new releases of 2016, but we couldn't help ourselves and had to include a few oldies but goodies. Hello ... Joan Didion can do no wrong! Enjoy, and remember it's not a book club without some discussion, so hit us up on social media with your thoughts and share your favorites. Happy reading, bookworms!

The Story:
Just last week Emily Giffin drew a crowd of 250+ fashionable women to the swanky rooftop of The Hepburn to celebrate the release of her eighth women's lit novel, proving she's still got it. In "First Comes Love," we first meet the protagonist sisters Josie and Meredith Garland as teenagers who are wrapped up in their own worlds, until tragedy strikes. Flash forward fifteen years and both girls are in their late thirties, following very different paths than they expected. Both are at crossroads grappling with whether they made decisions because they were what they truly wanted, or because they felt like they were supposed to. True to typical Giffin style, the dialogues between characters were eerily natural and relatable. I came away from this book with a resounding reminder that life is not as our Instagram pages would have you believe-- we never truly know what is going on behind closed doors in anyone's life and in turn, we should try to approach others with a little less judgment, a little more compassion.

The Story:
For her third novel, local girl Karin Tanabe tries her hand at historical fiction -- and does it with aplomb. "The Gilded Years" tells the story of Anita Hemmings, the first African American to attend Vassar (Tanabe's alma mater) before black students were actually allowed in. Hemmings manages to pass for a white student until she's paired with a new roommate her senior year, a girl from a very well-to-do family, and her secret is threatened, showing just how far a woman will go in pursuit of an education. As in her previous two novels, Tanabe artfully creates dynamic characters whom you find yourself missing the moment the book ends.

The Story:
Another Washingtonian author, Nic Cober, took what could have been a really disastrous year -- losing the business she'd run for a decade, filing for bankruptcy and going through a divorce -- and turned it into a self-help book, to aid others in avoiding her own mistakes. "It really was a six-year process to finish the book," says Cober. "I started writing the day I closed the doors of Soul Day Spa, took steps to stop shaming myself regarding the perceived failure, really evaluated the mistakes I had made, found a support group and got some help and then truly turned the page and closed that chapter of my life. I figured if I could get through it, why not show others the way?" And that is what "CEO of my Soul" is all about -- empowering anyone who has been down on their luck to take back control of their lives and rebuild. Using her own personal experiences, Cober walks her audience through the steps she took to go from down and out to having her own law practice, providing small business consulting through the SBA and training other business owners to see oncoming financial troubles before they hit.

The Story:
I have to put this down as one of my favorite reads of 2016 yet -- I couldn't stop smiling as I turned each page! This anthology of essays from bestselling authors and celebrities, edited by locals Cathy Alter and Dave Singleton, explores the themes of love (unrequited and reciprocal), lust, adoration and pain from the perspective of reflecting on one's first celebrity crush. What almost all the essays had in common was that through the reminiscing and retelling of surface-level childhood crushes, each contributor was forced to confront a deeper parallel meaning of those feelings. Why do celebrities have such power over us mere mortals? What do these often fleeting moments in time represent? What do they say about the way we see ourselves? What does it mean when we put these idols on unreachably high pedestals? And what in the name of all that is good and holy will happen when they undoubtedly disappoint us, and fall? Well, all I'll say is you just have to read it. And don't -- I repeat DO NOT -- miss James Franco's wonderfully weird poetic tribute to River Phoenix -- it's one of a kind!

The Story:
This book is a double winner -- not only is it written by a local gal (can you tell we have major crushes on DC authors right now??) but it is set in D.C. as well. Most impressively, it manages to strike the perfect balance between playfully ribbing the city and its eccentricities without spiraling down into a total ranting hate fest. Beth is a young wife who must follow her husband to Washington as he pursues his political dreams, but she quickly realizes she hates everything about D.C., from the way security clearance levels are casually dropped at dinner parties to the Ann Taylor uniform; but especially the way people seem to immediately dismiss her once they realize she is not in politics. As in her first novel, "Girls in White Dresses" (see #10 on this list), what Jennifer Close does best is paint painfully honest portrayals of human relationships -- in this case the struggles of young marriages and friendships.

The Story:
Joan Didion’s seminal novel “Play It As It Lays” may not be standard poolside reading, but this 240-page masterpiece is impossible to put down. The story follows the emotional breakdown of Maria Wyeth, but the glimmering background of Los Angeles in the late 1960s is starkly similar to modern times, brimming with generational ennui and sense of upheaval on the horizon. Didion’s distinct prose is sharp, but not as heavy as many classics, making it a perfect afternoon read.

The Story:
Millions of Americans are already familiar with Adnan Syed's name and story from the Peabody Award-winning podcast Serial. And in light of the fact that a Maryland judge just vacated Adnan's conviction and granted him a new trial, this compelling narrative is particularly relevant. Rabia Chaudry, Adnan's close family friend and longtime advocate, first contacted Sarah Koenig, a producer at This American Life, in 2013 in hopes of finding a journalist to tell Adnan's story, which led to Serial. But Chaudry felt it didn't tell the whole story. In this book, she "presents new key evidence that dismantles the State's case: a potential new suspect, forensics indicating Hae Min Lee was killed and kept somewhere for almost half a day, and documentation withheld by the State that destroys the cell phone evidence" among other points. Readers are also given glimpses into Adnan's life in prison and the book includes personal reflections from him regarding the events covered in Serial. It is definitely going to be a huge talker this summer, so hop on it when it hits shelves August 9.

The Story:
If there is one thing I can promise about this book, it's that it is a page turner until the very end; literally, the last sentence of the epilogue contains the big plot twist. This New York Times bestseller grippingly follows an atypical kidnapping plot where nothing is what it seems. When Eve Dennett receives a phone call that her youngest daughter Mia did not show up for work one fall day, her world crumbles around her as she is left to deal with an emotionally detached husband who refuses to admit anything has even happened and her eldest daughter who seems to not care about anyone but herself. Her only solace is the sensitive yet deeply insightful police detective assigned to Mia's case. With overarching themes of loneliness, complicated familial relationships and self-reliance, "The Good Girl" will leave you with shivers and a strong desire to call your mother!

The Story:
Issa Rae was once told that being awkward and black were the two worst things one could be. But she's both, and darn proud of it. And truly, it's working for her considering she has an award-winning comedic web series and one of the most unique voices of today, that has been said to be "universally accessible" and having "the verve and vivacity of uncorked champagne;" think Lena Dunham meets Mindy Kaling. In her book, named for the web series, she shares what it is like to exist as an introvert in a world that glorifies cool.

The Story:
This is the perfect summer read for any woman going through her “quarter-life crisis” as I like to call it. The book chronicles the lives of three young women going through growing pains. Do you ever feel like every time you log into Facebook someone else you know is getting engaged, but you seem to be stuck in life? Well, guess what? Isabella, Mary, and Lauren all feel the same way. This book is funny and relatable to probably any woman in her 20s.

We chatted with the Good Morning Washington team about our summer book picks, and anchors Kidd, Jummy and Autria shared their go-to reads as well. Watch the segment here.