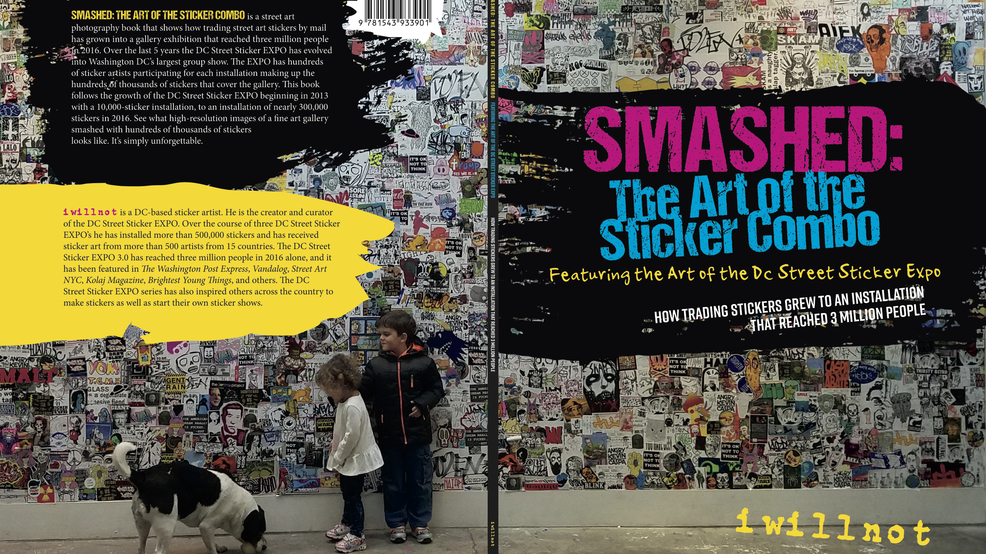 Street stickers aren’t exactly well known for their presence in art galleries or museums, but that may change thanks to one D.C. resident. Despite stickers being typically lumped in with graffiti and other forms of vandalism, sticker art has had the chance to be treated as high art more than once in the nation’s capital, thanks to an anonymous artist and curator, who goes by the pseudonym, iwillnot. Now, five years after his first expo, iwillnot is publishing a 106-page photography book, called “Smashed: The Art of the Sticker Combo,” focused on his three sticker art exhibitions at the Capitol Hill art gallery, The Fridge. The book will release July 22 on Amazon.

In 2016 alone, iwillnot’s latest art expo reached three million people. It was featured in publications like The Washington Post Express, Brightest Young Things and Street Art NYC. According to his publication, his expo is the city’s largest group art show and has accumulated more than 500,000 stickers from over 500 artists across 15 countries. By publishing this book, which focuses on the story of how his expo grew and the best designs featured therein, he says, “I didn’t want it to get lost.”

iwillnot says that in 2011 he became obsessed with the idea of “smashing,” or filling up completely, an art gallery with stickers. By focusing on an art gallery as opposed to a coffee shop, he hoped to bring sticker art into the mainstream and allow people who may be unfamiliar with the medium to glimpse the small, high-impact designs.

Once he had the idea to fill an entire gallery with stickers, it took about 12-18 months to convince Alex Goldstein, the owner of The Fridge, to give him a chance. In August 2013, he received permission to cover one 12.5-foot-by-20-foot wall in the gallery with approximately 10,000 stickers. The sticker bomb was part of a series of exhibitions in November 2013 known as “Elements of Hip Hop,” by Emma Fisher and Asad Walker. Afterwards, The Washington Post Express picked it up, featuring it on their cover more than once, causing the exhibition to soar with activity.

For the following show in 2015, The Fridge was split in half with a portion of the space covered in stickers and the other portion left bare with fine art pieces featured by select sticker artists.

It wasn’t until the third expo in November 2016 that iwillnot finally achieved his dream to cover an entire gallery with thousands of stickers. It took three weeks to install the show and over 100 hours with the help of many volunteers, sometimes up to six at a time.

Over the years, more artists in D.C. have begun to delve into the sticker art medium. In 2010, there were maybe two or three other sticker artists in D.C., according to iwillnot. Now, at least 50 or 60 local artists will be included in the upcoming sticker art exhibition at The Fridge. This exhibition will run from early November 2018 to late December 2018. The Fridge is still accepting stickers for the fourth expo. For those interested in sending stickers and posters, the deadline is September 15. Send entries to: