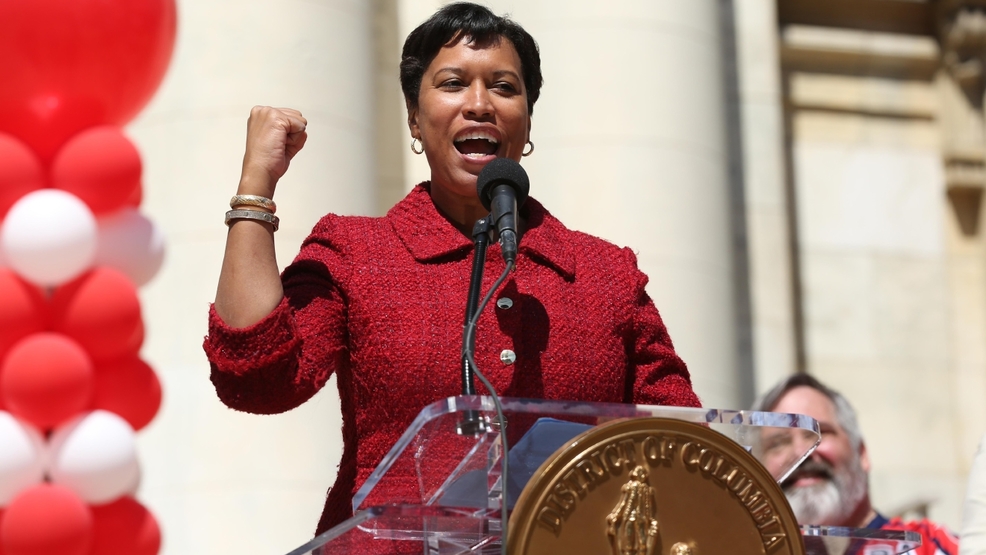 On June 19, D.C. voters will cast ballots in the primaries for mayoral candidates, council members and House delegates. To prepare voters, DC Refined reached out to every candidate in the races and asked for interviews. Candidates who did not respond to the request are noted with an *. (Image: Amanda Andrade-Rhoades/ DC Refined)
SEE MORE

Voter Guide: A look at D.C.'s mayoral candidates before the primaries

On June 19, D.C. voters will cast ballots in the primaries for mayoral candidates, council members and House delegates. To prepare voters, DC Refined reached out to every candidate in the races and asked for interviews. Candidates who did not respond to the request are noted with * below. First, we will examine the candidates for Mayor.

The incumbent's campaign website lists many of her proudest achievements: supporting the Paris climate agreement, launching the largest deployment of body worn cameras in the country to the Metropolitan Police Department, lowering crime overall and investing over $100 million per year in affordable housing. If Bowser is elected for a second term, she will become the first D.C. Mayor since Anthony Williams in 2002 to return to office. Before her time as Mayor, Bowser worked as a Councilmember for Ward 4, chairing the Committee on Economic Development. She also served as an Advisory Neighborhood Commissioner in the Riggs Park neighborhood.

In 2006 and 2012, Wilcox, a D.C. Statehood Green party member, ran for the At-Large Member of the D.C. Council position, and, in 2010, she campaigned to become the Council Chair. Wilcox has been a member of the D.C. Board of Education, a co-chair of the National Green Party peace action committee and was (and perhaps still is) a member of the steering committee for the D.C. Statehood Green Party. she is a practicing attorney who has represented protesters and defended gay rights activist, Dan Choi, an officer in the U.S. Army who publicly challenged the nation's Don't Ask, Don't Tell policy. In an interview in 2010, Wilcox said, “It is probably a long shot for the Statehood Green Party to win the chairmanship. However, all of our campaigns work to raise the visibility of the party, its progressive agenda and its status as a viable, progressive alternative to the established Democratic Party.”

Butler's highest priorities include increasing affordable housing in the city by holding developers responsible for creating lower-priced units, ending homelessness by increasing outreach and wraparound services and improving education by relinquishing mayoral control from the D.C. school board. He also hopes to implement an optional after-work hours program for parents that will focus on scholarship opportunities, ACT and SAT test dates and other important matters relevant to local students. As a former past civil rights lawyer and the son of ministers, Butler says that he always looks for ways to better help his community. As a member on the auxiliary board of the Greater Mount Calvary Holy Church, he participates in a program, known as Race Against Child Hunger, where he serves underprivileged children meals during the summer months. He is also a board member of the Natural Ivy Foundation for the Homeless in Los Angeles, California, which is working on opening an office in the District.

In 2009, Butler was disbarred for accusations of malpractice in 2009. According to court records filed by the D.C. Bar, the D.C. Bar Clients’ Security Fund paid over $650,000 to former clients from Butler’s firm. Butler tells DC Refined that the issue involved him hiring a full-time employee who indicated that they were a lawyer, but were not. Despite past mistakes, Butler says, “My work speaks for itself, not only as a commissioner, but my commitment to civil rights I am a guy who has devoted his life to putting people before all else, and I will continue to do that as Mayor.”

Ernest E. Johnson certainly isn’t the most well-known candidate in the June 2018 Primary, but he has been involved in D.C. politics since 1978. This third generation D.C. resident is running to become Mayor with a resume that includes working for former D.C. Mayors Walter Washington and Marion Barry. He has served on the Board of Directors for the D.C. Apprenticeship Council, Columbia Heights Development Corporation and Coalition for Housing Justice. He is also the founder of the Parkwood Place Book 2 School Committee, which provides local students with backpacks and other school supplies.

Many of the issues Johnson sees in the city, from rents that are too high to a “failing” school system, are commonly held beliefs by many of the candidates in this election season, but some of his solutions are rather unique. He says he hopes to “put the brakes” on the “runaway development” in the city. More specifically, he plans on putting a one-year moratorium on all rent increases as well as a six-month moratorium on all development and building permits. Johnson also wants to replace the D.C. Superior Court, which has judges that are appointed by the U.S. President and confirmed by Congress, with something he calls the District of Columbia City Court. This vision of his involves every judge being appointed by the D.C. Mayor and confirmed by the D.C. Council. Final additional platforms worth knowing include that he hopes to retrain the Metropolitan Police Department in non-lethal force, and he hopes to use eminent domain for any property in the city that is vacant for two years or more in order to create more affordable housing.

Martin Moulton is the only Libertarian candidate running for D.C. Mayor, but he doesn’t see that as a disadvantage. On the contrary, Moulton tells DC Refined, “If I got half the number of registered voters that Muriel Bowser didn’t get when she won, if I got all the Libertarians, if I got a good segment of the LGBTQ population and I peeled off a certain number of the black vote, I think I can win.” This isn’t Moulton’s first rodeo when it comes to politics. In 2016, Moulton ran for the D.C. Delegate seat as a Libertarian, losing to Eleanor Holmes Norton by a margin of 85 percent to 6 percent, while collecting 17,272 votes, as reported by Washington Blade.

Moulton’s priorities include tackling the scandals that have beset the D.C. Public School (DCPS) system recently, abolishing all drug laws in the city and legalizing prostitution. On education, Moulton says, “I see that our current public school systems are failing I think that the failures of DCPS and our public school system was a bunch of bureaucrats devising schemes to tell parents how they should educate their kids and sort of limiting how they can educate their kids. It’s a tragic disaster.”