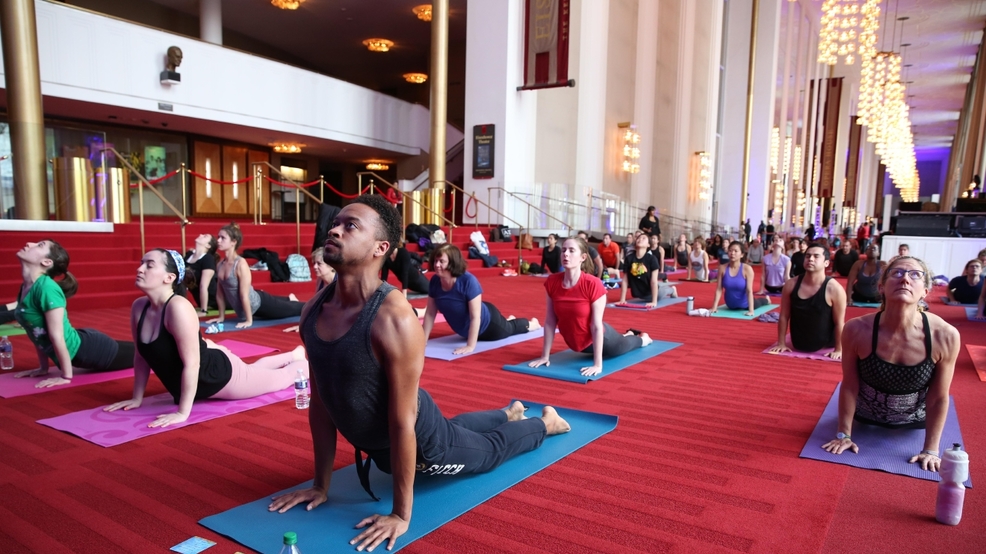 Weekend Report: Make room on your calendar for these 11 events

Evenings at the Edge Wonder Women: Who runs the world? Girls! Evenings at the Edge returns with a tribute to the trailblazing women who have created and inspired masterpieces of art from the last century. Discover their stories with pop-up talks, craft your own fierce female superhero, and get into formation with performances from the internationally renowned, all-female tap sensation Syncopated Ladies. Free to attend.

Andrew Rannells In Conversation with David Litt: The actor who played Elder Price in “The Book of Mormon” and Elijah Krantz in HBO’s “Girls”will be here in D.C. to chat about his new memoir, "Too Much is Not Enough: A Memoir of Fumbling Toward Adulthood." He'll share every awkward experience on his journey from Omaha to NYC at 19, his first big break on Broadway, his first really bad highlights, his favorite behind the curtains romance, and how he recovered from the loss of his father. Tickets are $20.

The Environmental Film Festival: DCEFF kicks off with a jam-packed lineup of environmentally-themed movies showing all across the city through March 24. Programming kicks off at The National Geographic Museum with "an immersive adventure through the unknown wilds of the Texas borderlands" in a screening of "The River and the Wall." Catch more ranging from shorts like "5000 Miles of Wild" at the Interior Department to Oscar-winning documentary "Free Solo" at National Geographic on 3/18. Ticket prices vary.

The Watsons Go to Birmingham-1963: Come on out for opening night (and world premiere) of this Kennedy Center commission, an adaptation of Christopher Paul Curtis's Newbery Medal and Coretta Scott King Award–winning book. Meet the Watsons of Flint, Michigan: Momma, Dad, little sister Joetta, big brother Byron, and ten-year-old Kenny. When Byron can’t stay out of trouble, the whole family piles into their “Brown Bomber” and drives south to visit Grandma Sands for the summer. But along the way, they’ll experience a pivotal moment in the Civil Rights Movement. Tickets start at $20.

Yoga at the Kennedy Center: Enjoy a free, all-levels vinyasa yoga class in the Grand Foyer as part of the Kennedy Center's Sound Health program connecting the performing arts to mind-body wellness. An instructor from a different local yoga studio leads each session, and this weekend instructor Atticus Mooney is teaching. Free to attend.

The Hip Hop Museum Closing Gala: If you haven't made it to the hip hop museum's pop-up at the Blind Whino, this is your last chance! Check it out with everything from museum viewings and panel discussions to live beat battles and other musical performances lasting until midnight. Tickets start at $35.

Plant Swap: Bring your plants, cuttings and seeds to share, and take some new ones home. Introduce your plant to its new parent by labeling them with information like its name, light, soil and water preferences. Free to attend.

The Big Apple Circus: The Circus has rolled into town and it's here to stay, with performances at the National Harbor through March 24. But before you get images of elephants and red-nosed clowns in your head, the Big Apple Circus is not the circus of yesteryear. Enjoy breathtaking acts like The Flying Tunizianis on the trapeze, the Spicy Circus trampoline act, and animal trainer Jenny Vidbel, who only works with rescue dogs and rescue horses -- no wild animals. This particular performance will feature Jake Tapper and his two kids as the celebrity guest ringmasters; his 11-year-old daughter will also have a book signing for her children's book "Raise Your Hand" following the show. Tickets start at $15.

Profs & Pints Intro to Gaelic: Celebrate St. Patrick's Day in a way that would make your ancestors proud by taking an introductory Gaelic class from Professor Jennifer ORiordan, former assistant director of Irish Studies and Irish language instructor at Catholic University. Get some tips on basic pronunciation, learn what the heck the craic is and finish by learning a selection of Gaelic greetings and useful phrases. Tickets are $12.