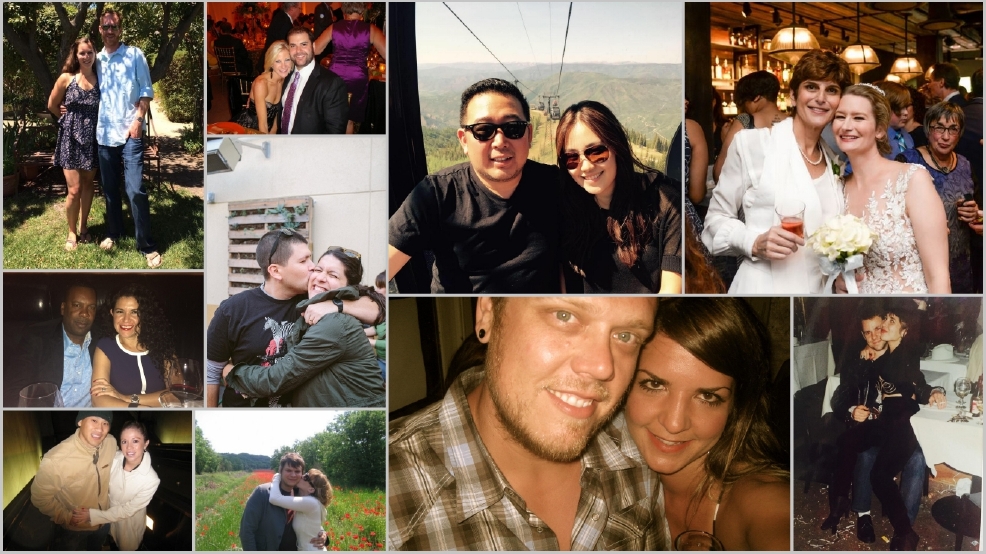 We asked area culinary talent to time travel back to the first time they laid eyes on their partner. Then, we prodded further to find out where they went on their first date. The result is a goldmine of date inspiration. (Image: Courtesy )
SEE MORE

We asked area culinary talent to time travel back to the first time they laid eyes on their partner. Then, we prodded further to find out where they went on their first date. Feeling lucky, we even asked for photos from the early days of each relationship. The result is a goldmine of date inspiration, just in time for spring fever, plus a heavy dose of nostalgia.

Jamie Leeds, the chef and restaurateur behind the Hank's Oyster Bar empire and more met her wife, Tina McDaniel, during the big snow blizzard of 2015. "Nothing, not even the shutdown of the city, could keep us apart," Jamie says. Their first date was at Iron Gate, inside the dining room where the fireplace was blazing. "Tina wore her red high-heeled shoes to impress me, and boy did they." The grilled octopus was a standout dish. "The restaurant was closing and we didn't even realize it until the lights came on -- we knew instantly that we wanted to spend our lives together," Jamie says. Iron Gate's tempting wine list, romantic dining room and thoughtful tasting menu spell love.

The EatGoodFood Group duo of Cathal and Meshelle Armstrong met in 1992 at Cities in Adams Morgan. Meshelle served as the designer and manager and Cathal was helping out in the kitchen -- though mostly he was sending Meshelle love notes in the form of mini pizzas. When they eventually went on a first date, it lasted a week. After service one night, a group went to Paper Moon Restaurant in Georgetown for dancing, and then it was onto Bistro Francais the next day for breakfast. "One day I will open a restaurant," she told him. "One day, I'll open it with you," he responded. The marathon date concluded with dinner at Vidalia the next day. Sally Buben's lemon chess pie and the shrimp and grits left an impression -- so much so that Cathal started working there.

When Mandu opened on 18th Street NW becoming one of the first Korean restaurants to open in D.C. proper, Natalie Park was an instant regular. She lived nearby and occasionally chatted with Chef/Owner Danny Lee because they had friends in common thanks to sharing the University of Virginia as their alma mater. One night Danny asked Natalie to tag along to a late night raw bar session at D.C. institution, Old Ebbitt Grill. She said she loved raw bars and he was immediately smitten. But their first solo date was on New Year's Day at Choong Hwa Won, a Korean-Chinese restaurant in Annandale, where we can only imagine they ate noodles, Lady and the Tramp spaghetti-style.

Danny Wells, the chef at Republic in Takoma Park, remembers his first date with his wife, Sarah Nash, way back in 2003. The soon-to-be-couple picked up a mixed green salad and a Norcia pizza (still on the menu today) and brought it back to Danny's apartment above a garage near the National Cathedral. "We ate it on my futon with some kind of cheap beer," he says. "We were instantly in love, with 2 Amy's at least." He adds that they've dined at the Neapolitan pizzeria 200 times since that first date, and their daughter, Sadie, loves it too.

The couple behind Kyirisan, Tim and Joey Ma, first connected over sports. They played football and basketball in different leagues and also hit the nightlife scene. "Once we started dating, we realized we had to go on an official first date," Joey says. Tim planned the date to be a surprise and provided no clues. "I had no idea we were going to 2941 until he showed up at my house wearing a suit you would find in the pages of GQ, " Joey explains. After a quick wardrobe shuffle akin to a scene in 27 dresses, they were off. "We went in, the decor was gorgeous, the service on point," Joey adds. They drank bubbles and tried the tasting menu. Though more casual today, pulling up to 2941 can still take your breath away.

Sebastian Zutant, sommelier and partner at The Red Hen and All Purpose, was pouring wine at Komi when he first laid eyes on Lauren Winter. She was a frequent diner at the fine dining supernova and also shared friends in common with Sebastian. While the first time they hung out was at Café St. Ex, their first date was at Firefly in Dupont where he tried to woo her with great drinks courtesy of Derek Brown who was tending bar there at the time. Firefly remains a great date spot with its cozy, woodsy dining room and signature dishesDevils on horseback, shrimp & grits, and mini pot roast.

Harper McClure, the current chef of BRABO in Alexandria, met his wife, Blair McClure, when they both worked at Equinox under Todd Gray. Harper and Blair worked side by side as Harper was the tournant and Blair was sous chef. Their first date was at Black Rooster Pub around the corner from the restaurant. The bar has been providing liquid courage for first dates since they opened in 1970. Harper and Blair ordered dirty martinis and Blanton's bourbon before ending the night listening to Mark Farina at U Street Music Hall. Harper called it, "the best date ever."

Though Claudia Rivas, the owner, chef and namesake of Claudia's Steakhouse met Charles Adams in 2008, it was a long time before they went on a first date. At the time Claudia owned a restaurant called Brasas in Charles County, Md. and Charles would visit whenever he was in town. The two bumped into each other at a lounge where Claudia would go for a drink after work and a friendship was born. Eventually, Charles asked Claudia out for a first date in 2013. They went to a basketball game and Cuba Libre for dinner and dancing. The downtown, D.C. Cuban restaurant is best known for its mojitos, lively scene and ceviche. Three and a half years later Claudia and Charles are engaged, planning their wedding and partners in Claudia's Steakhouse.

Chef Mike Friedman of The Red Hen and All Purpose was set up with Ashley Lethbridge by a family friend, but he didn't bring his A-game on date one. They planned to dine at Estadio, 14th Street's Spanish hotspot, the day after Mike's 30th birthday in 2011. Unfortunately, he awoke suffering from food poisoning, but no way was he rescheduling the date so he took Ashley out as planned. He spoke very little, and ate even less. After dropping Ashley off in a shared cab ride home, Mike uttered, "I really think I missed that up." And the cab driver responded, "Oh yea buddy, you sure did." He called the next day to apologize and cooked for her the next evening.

Another Equinox love match! Anthony Chittum, the current executive chef at Iron Gate, first met Dominique Arvanitis Chittum when they worked together in Equinox. Later, the pair worked together again at Notti Bianche. But it was in November 2006 that they had their first official date at Duangrat's Thai Restaurant in Falls Church, Va. Dominique was introduced to the restaurant by her cousin and was inspired to bring Anthony to experience it. Today, it's still one of their favorites. They wash down shrimp and pork dumplings and Chiang Mai chili pork with Bangkok Sunrise cocktails.