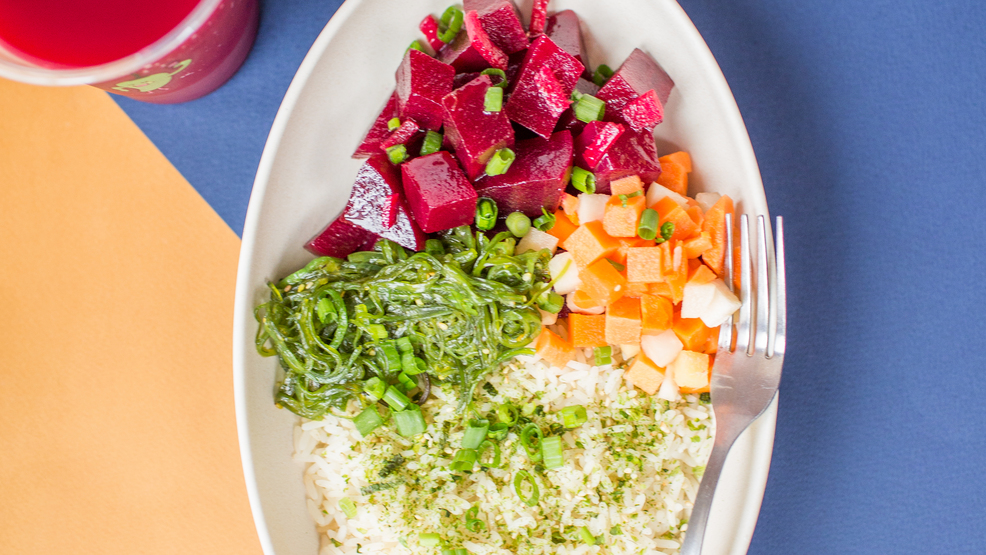 15 vegan dishes to chow down on now

Last week, we drooled over some hearty and satisfying vegetarian dishes that deserve to be the main event at dinner. But if it’s hard to find a great vegetarian entrée while dining out, vegans can tell you that it’s even harder to find exciting options without dairy, eggs, meat, or any other animal products--for any meal!

So, whether you’re actually vegan or you’re trying an impossible elimination diet, we’ve rounded up 15 vegan dishes that won’t make you feel like you’re missing anything.

José Andrés’ first fast casual spot is all about the veggies. The Hokey Beet Poke bowl is a unique vegan alternative to poke. Sweet beets are marinated in fresh ginger, sesame oil, soy sauce, and rice wine vinegar. This ‘beet poke’ is served on top of furikake-seasoned rice with pickled veggies, seaweed salad, and scallions. ($7.99)

If you’re on the go, you can grab a quick but flavor-packed vegan meal at Choolaah. One popular option is the roasted cauliflower & chickpeas wrap. The egg-free naan is stuffed with chickpea masala, cabbage, roasted cauliflower, and pickled onions. ($6.99)

The newest restaurant from Fabio & Maria Trabocchi is all about showcasing the bounty of the ocean, but Del Mar also has some tempting Spanish offerings for plant-eaters. The Escalivada is a beautiful display of Catalan-style char-roasted eggplant, onions, red bell peppers, and tomatoes. ($16)

Known for top-notch vegan cuisine, Equinox has plenty of plant-based options to choose from. One that stands out is the hearts of palm cake. The hearts of palm cake is the vegan version of a crab cake, made with braised heart of palm mixed with sourdough bread, capers, lemon zest, house-made dairy-free mayo, parsley, and seasonings. It’s then sautéed and accompanied by roasted spaghetti squash, braised Swiss chard, and crispy Vidalia onions. ($33)

Doron Petersan’s vegan diner serves up a Buffalo cauliflower dip so no one has to miss out on this Superbowl staple. The cauliflower is roasted, whipped, and combined with Buffalo cashew cream. ($10)

This certified organic spot is 100% plant-based, so you can chow down on waffles without any dairy or eggs. The ABC Waffle is topped with house-made almond butter, whipped coconut cream, cacao nibs, and maple syrup. It’s also gluten free. ($9.95)

This French brasserie serves up a vegan version of a North African specialty. The vegetable tagine is laden with couscous, zucchini, yellow squash, red peppers, cauliflower, chickpeas, eggplant, caramelized onion, almond, and golden raisins. It's served with a side of harissa paste and a pitcher of broth made with ginger, soy sauce, tomato, onions, fennel, and spices. ($20)

Warm up with the hearty black barley porridge at Momofuku. Black barley sits in a sunchoke broth with creamy chestnut puree and is topped with crispy kale, maitake mushrooms, squash, and charred pearl onions. ($19)

Everything at Shouk is 100% plant-based, but their vegan burger is still the most popular item. The gluten-free patty is made with black beans, beets, cauliflower, chickpeas, lentils, onions, mushrooms, oats, green onions, and spices. It’s served with tomato bursts, pickled turnips, arugula, charred onion, and tahina in a pita or bowl. ($9.75)

While many donuts have some form of dairy or egg hiding in them, the donuts at Sugar Shack are almost all vegan. Indulge in a glazed donut or even a French toast donut. Other vegan flavors include chocolate glazed, fruit glazed, cinnamon sugar, powdered sugar, and jelly-filled. ($2.10 or $2.80 each)