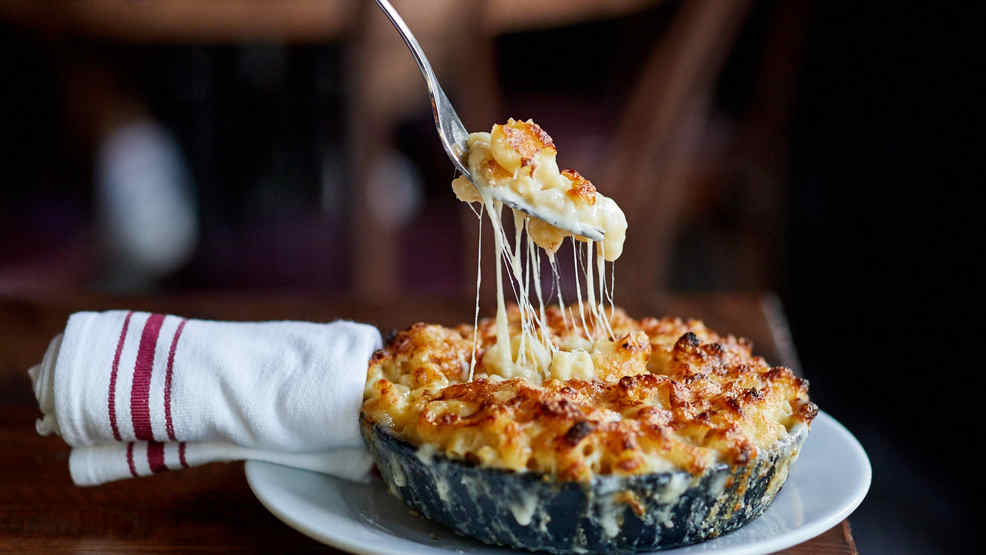 Skillet Mac and Cheese at The Smith (Photo credit: The Smith)<p></p>
SEE MORE

17 places to satisfy your soul with mac and cheese

Mac and cheese may just be the epitome of comfort food. Creamy, satisfying, and oh-so-indulgent. This perfect pairing is one of the best ways to beat the D.C. deep freeze from the inside out.

Here are 17 decadent mac and cheese dishes to try now:

The aged Gruyére and white cheddar mac and cheese at this New England-inspired seafood spot is given a coastal quality with crab and Old Bay. It’s topped with Sriracha biscuit crumbs and then baked. ($14)

Barrel’s mac and cheese is a fan favorite, made with goat, Fontal, Parmesan, and Gruyére cheese, plus a zesty gremolata. ($14)

Chef David Guas switches up his mac and cheese offering at Bayou and Lil’ B regularly to keep things interesting. Favorites include a New Orleans-style mac with crawfish and a veg-forward dish with fresh farmers market finds. ($7 at Bayou, $6 at Lil’ B)

The juicy stacks of beef at this steakhouse are complemented by a creamy mac and cheese with aged white cheddar, Gruyére, toasted breadcrumbs, and parsley. ($12)

The most popular mac at this pasta truck is the classic mac with duck confit. The aged sharp white cheddar sauce is spiked with smoked paprika and accompanied by herbed duck confit. Crushed Cheez-Its, yellow cheddar, and chives provide the finishing touch. ($11)

The name of the game at this shop is cheese, so they naturally have a decadent mac and cheese. The Mac ‘n Cheesetique combines Asiago, goat Gouda, and Cacio de Roma cheeses in the sauce, and it’s sprinkled with truffle bread crumbs. The pasta is also made into arancini balls for dipping into marinara sauce. ($12)

Equinox’s truffled mac and cheese has been a customer favorite for years, and for good reason. It’s a satisfying combination of truffles, elbow macaroni, and Vermont cheddar. ($14)

The white truffle mac and cheese at Duke’s Grocery and Duke’s Counter features a blend of sharp and mild cheddar plus white truffle oil over shell pasta. ($11)

GCDC takes two of the greatest cheesy creations and combines them. The Carolina BBQ grilled cheese is stuffed with four cheddars, mac and cheese, BBQ pork, bacon, and jalapeños. They also offer an indulgent lobster mac with Parmesan cream sauce, cheddar, and garlic-Parm bread crumbs. Both are served during dinner only. ($14)

Carnivores are sure to enjoy the meaty take on mac and cheese by trophy-winning pitmaster Myron Mixon. The three cheddar mac is pumped up with baby back rib meat. ($10)

At Lincoln, the mac and cheese is made with smoked Gouda and farmhouse cheddar and it’s served in a mini cast iron skillet. ($11)

To balance out the richness of the sauce made with Gruyére, Pecorino, and cheddar cheeses, Roofers Union adds cayenne, nutmeg, garlic, and a brightening touch of lemon zest. ($9)

Thanks to Sticky Fingers, vegans don’t have to sit out on mac and cheese. This cheese-free version uses nutritional yeast, flour, seasoning, and spices to replicate the creamy goodness. ($3/cup, $5/bowl)

Instead of traditional macaroni pasta, Sixth Engine starts their mac and cheese with spaetzle made with quark. The noodles are pan-seared, mixed with Gruyére cheese sauce and caramelized onions, and topped with parsley and breadcrumbs. ($7/$12)

There may not be any pork in the mac and cheese at this pig-centric restaurant, but the rich dish stands on its own with aged Parmesan, Fontina, cheddar, Gruyére, and goat cheeses, plus cayenne, nutmeg, hot sauce, truffle oil, and herbed panko breadcrumbs. ($7/$8)

The skillet mac and cheese is one of the most popular dishes at The Smith. It’s made with cheddar, Swiss, Fontina, and Parmesan cheeses and served in a hot skillet. ($14)

Bryan and Michael Voltaggio serve up a classic version of the homey steakhouse side at their family-inspired restaurant, with elbow pasta and cheddar in a small skillet. ($10)