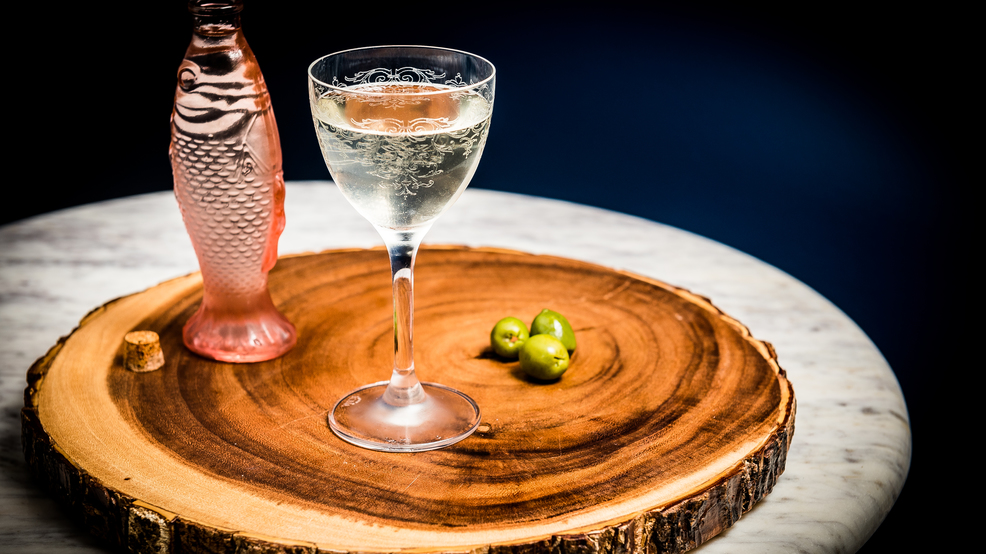 Sirene at Bresca, which seamlessly blends perfectly chilled temperature with umami, salinity and flavor yet retains the essence of the original. (Image: Rey Lopez)
SEE MORE

3 spots where the martini is having a major moment

It looks luxe on the bar top, is unapologetically boozy and makes you feel elegant just lifting it up to your lips. Of course, we’re talking about the martini. That combination of gin (or vodka, for non-traditionalists), vermouth and maybe a few dashes of bitters, stirred (never shaken) and served up in a cocktail or Nick & Nora glass, is always in style. And that’s never been more true than right now in D.C. These three new spots are clearly taking the classic to a whole new level.

Requin
When Taha Ismail was designing the cocktail program at the new French restaurant at The Wharf, the beverage director for Mike Isabella Concepts immediately knew he wanted to incorporate traditional Martini service--with a twist. “I created the list based on how I like to drink my Martinis,” he admits.

There’s a savory Gibson, with gin, pineau blanc (a regional French aperitif) and housemade onion brine; it’s served with pickled pearl onions and is a great match for escargots croissants with green Chartreuse butter. The Classique, with gin, dry vermouth and orange bitters, is served with olives and a lemon twist and is great sipped alongside steak tartare with crispy bacon and horseradish. And for the eclectic, olive oil-washed blanche Armagnac stands in for gin, which is stirred with Calvados, Americano Bianco and dry vermouth.

But it’s the 50/50 (thought to be the original ratio for the Martini), with equal parts gin and dry vermouth and a couple dashes of lemon bitters, that’s Ismail’s favorite (try it with the sweet and sour chicory pear salad). “It offers great balance between the vermouth and gin, resulting in a lower alcohol, easy-drinking cocktail that you can sip on all day,” he says. “I call it the ‘breakfast Martini’ because it’s a good first drink.”

No matter the selection, guests get a two-ounce pour of libation, as well as a decanter on ice to keep it perfectly chilled for topping off.

Bar Charley
The Martini menu at this cozy, casual spot on 18th Street runs more than 10 selections deep, and was inspired by the potable penchant of the father of Gordon Banks, co-founder of Goodbar Management Group. “Although my dad actually prefers an ice cold double shot of gin with a bunch of olives to a real Martini, he was, nonetheless, the one [who] sparked my interest,” he admits.

During his liquid research over the years, Banks realized most of his favorite sips consisted of gin, fortified wine and bitters (“simple, clean and delicious!”), so it was more about discovering that common denominator and putting its variants in one place rather than launching a Martini menu and then stocking it. He’s partial to the Hi Ho, a less boozy Martini on training wheels, which replaces vermouth with white Port, which is stirred with Hendrick’s Gin and lemon bitters, and the Puritan, an herbaceous riff with Ford’s Gin, dry vermouth, yellow Chartreuse and orange bitters.

The Smoky takes the most dramatic liberties, mingling St. George Terroir Gin with a splash of peaty Islay Scotch (try it with their charcuterie board). But any of the more traditional recipes would do well with Bar Charley’s jumbo shrimp cocktail.

So is the Martini trending right now? Banks is, um, banking on it. “Now that bartenders are becoming more knowledgeable and keeping vermouths fresh and refrigerated, guests are going to experience the wonderful bitter and herbal aromatics of the fortified wine rather than an oxidized shot of vinegar.”

Bresca
“A good Martini is like a long weekend,” muses cocktail consultant Juan Coronado. “Once you are into it, you don’t want it to be over.”

And that’s certainly the case with the Sirène cocktail at Ryan Ratino’s avant garde French restaurant on 14th Street, which seamlessly blends perfectly chilled temperature with umami, salinity and flavor yet retains the essence of the original. It’s made by infusing vodka with oyster shells (which soften its mouth feel and add structure), then stirring it with dry vermouth, manzanilla sherry and verjus. The libation is served in a glass fish bottle with a dish of olives on the side. Both the glass and the bottle are kept chilled, so the drink gets to the guest with exactly the right temperature.

“I would describe this cocktail as elegant, savory, seductive, something that will open up your appetite before the meal,” Coronado says, who recommends it with radish crudite with seaweed brown butter, fleur de sel and green goddess dressing, and oysters served with Earl Grey tea, bergamot and black pepper.

He doesn’t think a cocktail menus is complete without a serious Martini, and it should always, always have vermouth; a briny element like an olive or an onion is great too, maybe offset by some citrus oil. “The martini has never left the scene – it is a good savory cocktail that would be good to have on any cocktail menu.”