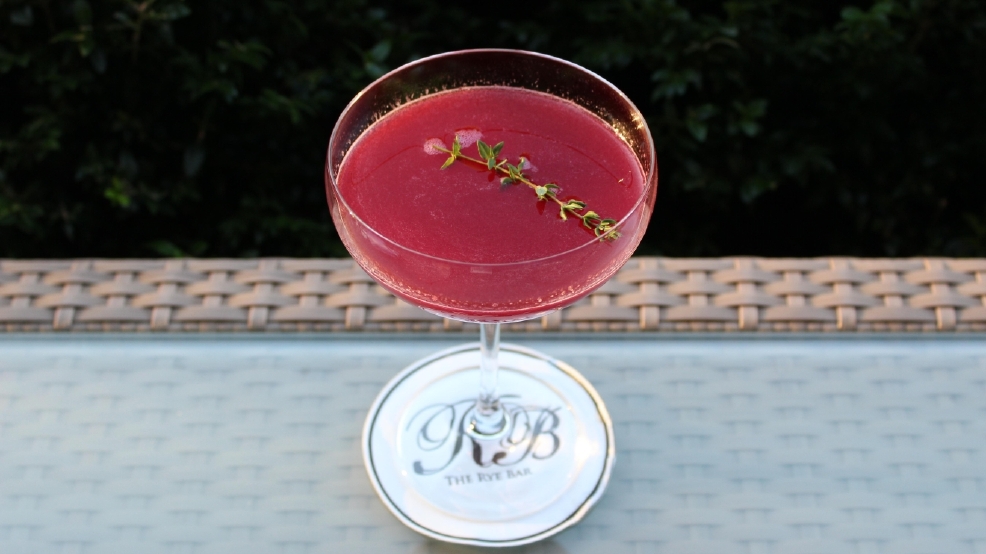 4 spots to throw back politically-inspired potables this election season

With less than two months to go, D.C. is aflutter with election fever. It’ll definitely be one to watch. And whether you need a drink to celebrate the latest poll results or to take away the sting of your favorite candidate falling behind, the District’s drink dens are getting into the spirit with libations inspired by candidates, parties, former Presidents and more. Blue or red, left or right, everyone can agree that we need a good stiff drink to get us through until November 8.

Not too far from where the winner of November 8th’s race will call home base, this sophisticated restaurant on Pennsylvania Avenue is shaking up libations that pay homage to the candidates’ slogans. The teetotaler’s delight Make America Grape Again ($12) mixes Moon Drop Grape Puree with Sherry vinegar and a sorghum-based spirit spiced with cinnamon, nutmeg, clove, allspice and black pepper, topped with soda and garnished with three grapes. I’m With Her ($12) shakes George Dickel Rye with Flor de Cana 4 Year Rum, Rocky Mountain Peach Liqueur and apple cider vinegar, garnished with a peach wedge.“Voting for a cocktail is easier than picking a President,” astutely notes Knightsbridge Restaurant Group general manager Michael King. “If you don’t like the cocktail you can always order another one, but a President you’re stuck with for four or possibly eight years.” What a sobering thought.

Off the Record at The Hay-Adams

Lobbyists, politicians and their ilk have long frequented this watering hole at the Hay-Adams, which has a killer view of the White House. This fall, bartenders are whipping up drinks inspired not just by the Presidential candidates, but by their running mates as well. “There is a lot of pressure associated with casting a ballot in a Presidential election, whereas ordering a cocktail is a commitment for an evening,” says director of food and beverage Paride Guerra. “Our guests...can order a cocktail associated with their candidates of choice, or try all four libations if they are undecided.” The herbal Hillary’s Last Word, with Bombay Sapphire Gin, lime juice, green Chartreuse, Luxardo Maraschino and grenadine, is garnished with a maraschino cherry and lime zest; Kainenhattan stirs Plantation Rum with Carpano Antica Formula Vermouth and Angostura Bitters, adorned with a maraschino cherry and orange wheel; the Trumpy Sour mingles Knob Creek Bourbon Whiskey with whiskey barrel-aged bitters, lemon and honey, finished with a sprig of thyme and a dehydrated lemon slice; and Pence’s Tea Party has Laphroaig 10 Year Single Malt Scotch Whisky, Oban 14 Year Single Malt Scotch Whisky, DiSaronno Amaretto, Benedictine, orange juice, ginger syrup and vanilla extract, topped with crispy bacon and an orange peel. All drinks are priced at $16 each. And you can rest your cocktails on coasters with artwork created by political cartoonists Kevin “KAL” Kallaugher and Matt Wuerker, then take them home for a souvenir of this crazy election.

The luxe leather-filled bar at Georgetown’s tiny Rosewood Hotel has three libations (priced $14 to $16) themed around Clinton vs Trump 2016; for two of them, bartenders Cecilio Silva and Ismael Barreto thought about color. “When thinking about the Green Party, whose principles are...social justice, environmentalism and non-violence, we decided to use a Mexican spirit,” they explain. The Green Card mixes mezcal with honey, lime and ginger syrup, garnished with a lime wheel and basil leaves. Pacific Blue takes note of the fact that during the hotly contested 2000 election, all states on the Left Coast were blue; the drink has vodka, lime juice, simple syrup, Luxardo Maraschino Liqueur and blue Curacao, topped with blueberries and a lemon twist. And, since this year there are just so many voters who feel they are contemplating “the lesser of two evils,” Thyme to Decide attempts to make the process painless, with gin, honey syrup, lemon juice and blackberries and a thyme leaf. “With these cocktails, every time you pick one you vote,” say Silva and Barreto. “In the end, everyone becomes a winner with a little libation in them.”

Starting October 8 and continuing right through Election Day, imbibers at the Georgetown steakhouse at the Four Seasons can cast their ballot for one of four Presidential cocktails created by head bartender Torrence Swain (two represent the potable preferences of former Republican Presidents, while the others are what Democratic Commanders-in-Chief preferred.) “This election is crazy, so we wanted to keep it light-hearted, fun and candidate-neutral,” Swain admits. The Scotch-, absinthe-, and vermouth-based Wizbanger is named for a shell used in World War I, and Swain says it nods both to Eisenhower’s service in the Great War and his love for whisky. “The Chief” was Herbert Hoover’s nickname; the dry martini riff is taken up a notch with white truffles, Absolut Elyx Vodka and house made truffle brine. James Buchanan loved Sherry and had a huge collection; he would no doubt have loved Bourbon Steak’s Sherry Cobbler, with Lustau Sherry, brandy, muddled berries, lemon juice, ginger and bitters. And after a supporter yelled “Give ‘Em Hell, Harry” during a rally, it became Harry Truman’s slogan. “I wanted this drink to have an old-school vibe that reflects his era, so this keeps it simple and classic,” Swain notes. For the drink of the same name, Bourbon is stirred with Lustau Cream Sherry and a spice tincture.

I’m With Her
Recipe courtesy of 701 Restaurant

Add all except garnish to a cocktail shaker. Add ice and shake until chilled. Strain into a cocktail glass, and garnish with the peach wedge.

Add first three ingredients to a cocktail glass, add ice and stir until chilled. Strain into a coupe glass or over a rocks glass over ice, and garnish with the lemon twist and Bourbon cherry.

Trumpy Sour
Recipe courtesy of Off the Record

Muddle the lemon with honey and thyme in a cocktail shaker. Add ice and the rest of the ingredients (except garnish), shake well and strain into a rocks glass over fresh ice. Garnish with the thyme sprig and the lemon slice.

Muddle blackberries with honey, gin and lemon juice. Add ice and shake vigorously, then double-strain into a coupe, and garnish with the thyme sprig.