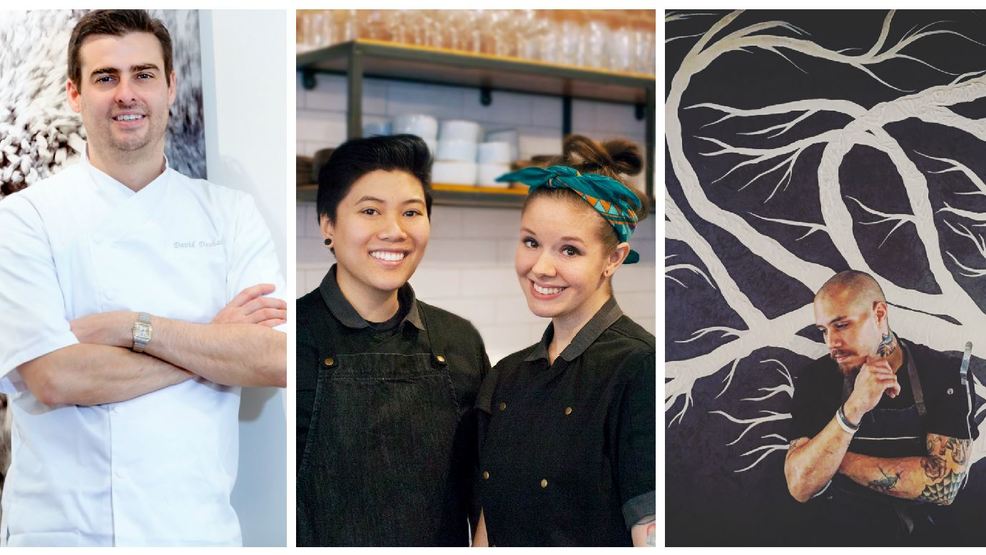 It’s a new year – 12 months of blank calendar pages are waiting to be filled with your dining adventures. But where to go? These seven rising star chefs are putting out some of the best plates in town. Eat with them now and say you knew them when. (Images L to R: Courtesy Unconventional Diner; Doi Dua; The Bird)
SEE MORE

It’s a new year – 12 months of blank calendar pages are waiting to be filled with your dining adventures. But where to go? These seven rising star chefs are putting out some of the best plates in town. Eat with them now and say you knew them when.

David Deshaies of Unconventional Diner
Age: 39
Hometown: Segré, France
Backstory: Deshaies got his first gig in the industry at his uncle’s catering company when he was 14. That inspired him to go to culinary school and obtain a degree in restaurant operations and business. Upon graduation, he cooked at Ses Rotges in Majorca, Spain, which had a Michelin star, and the three Michelin star La Côte Saint Jacques in Burgundy, France. He moved to D.C. 17 years ago to work for Michel Richard – “I began as a line cook because I couldn’t speak English,” he says – ultimately becoming the executive chef at Citronelle and Central. This past December, he opened Unconventional Diner in Shaw.
Cooking style: “I really like to cook what makes sense for the moment – seasonal cooking – and I cook with my heart.”
Signature dish: Tempura fried kale nachos zigzagged with red pepper jelly and cumin-lime yogurt dressing.
Golden rule: “I don’t want to cut corners. We follow the rules. When we make a chicken stock, we do it the right way or we don’t do it at all.”
What’s next: In approximately two weeks, the second half of the restaurant will open as a café for all-day breakfast and lunch. The main restaurant will begin offering brunch this spring.

Ryan Hackney of the Bird
Age: 30
Hometown: Washington, D.C.
Backstory: Less than five years ago, Hackney was pursuing a career in digital marketing. But he was bored by days filled with conference calls and answering emails. A friend working at Robert Wiedmaier’s Marcel’s suggested he stage there for a day. “I immediately fell in love with the intensity and speed,” he says. He quit his job the next day and went to work for Wiedmaier, who put Hackney through two years of “Marine Corps-style culinary boot camp.” From there, he had gigs at Iron Gate, Nonna’s Kitchen, Charlie Palmer Steak, and Macon Bistro. He spent the last two years working for Ashok Bajaj as an executive sous chef, first at Bibiana, followed by a stint at 701. At the end of last year, he took over as executive chef of the Bird.
Cooking style: “It’s a fowl-based restaurant, and the goal is to be accessible, but still have dishes and elements that scare people. I’m doing a beef-duck burger, but I’m also doing head-on, feet-on, whole roasted chickens. You’ll find Japanese, Ethiopian, and Chinese elements in my dishes, and my fine dining background comes through in the execution and presentation.”
Signature dish: The designed-to-be-shared Bangkok barbecue featuring gai yang style grilled chicken with sweet coconut rice and smashed cucumber salad.
Golden rule: “I’ve worked for yellers and screamers, but that’s not how I run my kitchen. I treat my staff like family.”
What’s next: In late January, he’ll begin offering a rotating menu of whole roasted game birds, such as Chinese black chickens and Peking ducks.

Russell Smith of the Source
Age: 35
Hometown: Takoma Park, Maryland, but raised in Edinboro, Pennsylvania
Backstory: His first job was as a dishwasher at Ponderosa Steakhouse, and he worked in kitchens throughout high school and college. However, it wasn’t until his childhood friend Danny Wells – now the executive chef at Republic – got him a gig working in the fish market at BlackSalt that he felt drawn to the industry as a career. “I had never worked at a restaurant where people cared about what they were doing and took pride in the food they were making,” says Smith. “It really turned me on.” He took a place on the line and worked his way up to junior sous chef, ultimately working at several of owner Jeff Black’s restaurants, including Black Market and the original incarnation of Addie’s. He became a sous chef at the Source in 2009 and took over the kitchen last year when Scott Drewno departed.
Cooking style: “I get paid to be an Asian chef and I love those flavors, but I don’t know if it defines me as a cook. I love all food equally and I love cooking all food equally.”
Signature dish: Har gow style carrot dumplings packed with shrimp and drizzled with tamarind vinaigrette and chili oil sauce.
Golden rule: “Simplicity and freshness.”
What’s next: To celebrate the Chinese New Year, he will teach a dumpling class on Saturday, January 24, and will host a night market and chefs takeover pop-up with Himitsu’s Kevin Tien, Michael Rafidi of Arroz, and Joe Neuman of Sloppy Mama’s on February 27.

Anna Vocaturo and Sarah Bui of Ðôi Ðua
Ages: Anna, 28, Sarah, 26
Hometowns: Bui was hails from Oceanside, California, while Vocaturo was raised in Cream Ridge, New Jersey
Backstory: Vocaturo attended culinary school for a year and worked in kitchens around the country as she traveled, including a stint at Rose’s Luxury. She was visiting Margerum Vineyard in Santa Barbara, California in 2013 when she met Bui. The two began hosting pop-up dinners in Portland, Oregon the next year, focusing on the cuisine of Bui’s homeland of Vietnam. They split the work: Bui handles the savory side of the menu, while Vocaturo is responsible for breads, pastries, and the wine pairings.
Cooking style: “We are trying to highlight classic Vietnamese dishes in a new way,” says Vocaturo. “We’re trying to refine it and bring out different things to show people that it’s more than just pho and banh mi.”
Signature dish: Head on prawns coated with pork paste, dipped into flattened rice, and deep fried, which arrive with serrano mayo.
Golden rule: Treat the ingredients with respect.
What’s next: Sign up for their mailing list to find out the details of their upcoming pop-ups.

Dorjee Tsering of Dorjee Momo
Age: 32
Hometown: Aba in Sichuan, China on the Tibetan plateau
Backstory: When he was six years old, Tsering went to live in a Buddhist monastery. The Tibetan would go home during the summer months, where he learned to cook from his mother and sister. Around the age of 17, he left to seek a secular education. After some time in Nepal, he ended up in Dharamshala, India, where he took jobs wherever he could get them, including one at a café. There he met his future wife and business partner, Amberjade, and the duo began doing pop-ups around D.C. last year, including a stint at Shop Made in DC.
Cooking style: “Creating bold flavors that are really clean and fresh.”
Signature dish: Pan-fried Tibetan momo (dumplings) with a layer of juice surrounding the ground lamb inside, which are served with 21-spice sauce hiding a slow smoky burn.
Golden rule: “Learn by watching.”
What’s next: Starting January 27, Dorjee Momo will have a permanent home in Bullfrog Bagels on Capitol Hill (317 7th St. SE), offering dinner Thursday through Sunday from 5-11 p.m.

Paolo Dungca of Kaliwa
Age: 27
Hometown: Los Angeles
Backstory: Dungca’s first industry job was at an Italian restaurant in Disneyland, but he moved on from there to work at Kevin Meehan’s Kali in Los Angeles. In 2014, he was obtaining his culinary degree from the Art Institute of California in Orange County when he traveled cross-country to visit his cousins in the D.C. area. He ended up cancelling his return ticket home and taking a job at Vidalia. The next year, he became a sous chef at Bad Saint before going to work for Cathal Armstrong at Restaurant Eve at the beginning of 2015. He will be the chef de cuisine at Armstrong’s Kaliwa, which will focus on Filipino cuisine with Thai and Korean elements.
Cooking style: “We want to represent the culture with elegance, while incorporating the techniques I’ve learned over the years and using the best ingredients.”
Signature dish: Filipino street barbecue – braised pork belly that’s grilled and basted with banana ketchup.
Golden rule: “Do things the right way. Don’t take any shortcuts. Keep your discipline.”
What’s next: Kaliwa is projected to open in February.