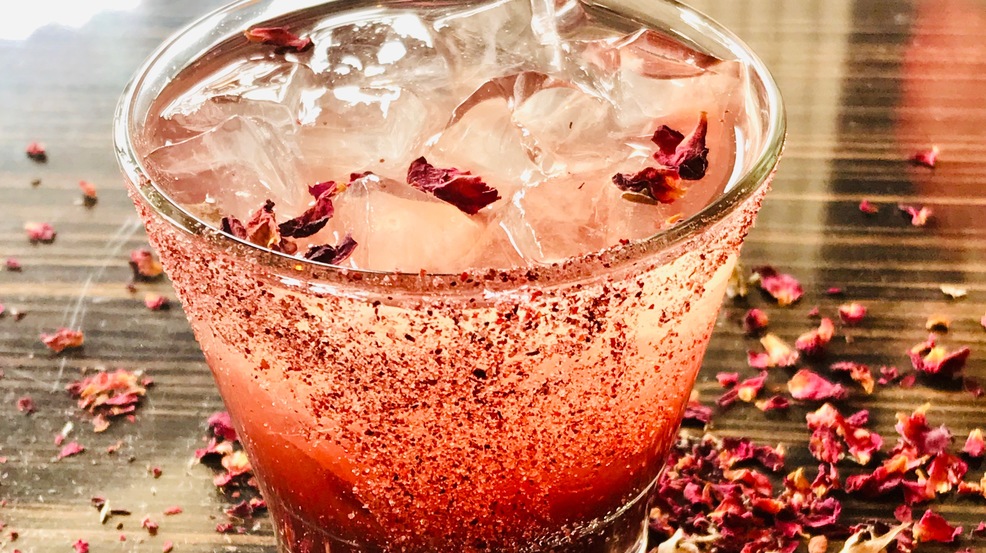 Skip the pricey bouquet and catch a whiff of these 7 heady rosy sips.

Think about the last time you breathed in a bunch of red roses: you probably didn’t smell that much, right? Because roses often need to travel hundreds of miles or more to the flower shop or grocery store, botanists have all but bred out their scent in favor of hardiness and appearance. So sad.

But romantics at heart, all is not lost. Rather than spend a hundo on a dozen underwhelming stems this Valentine’s, grab a cozy table à deux at one of these spots around town and sip cocktails with rose liqueur, syrup or rosewater while looking into each other’s eyes.

Compass Rose
The signature namesake drink ($12) at this 14th Street international street food restaurant (which owner Rose Previte points out is uber-popular among couples on first dates) tops PAMA Pomegranate Liqueur and rosewater with sparkling wine from Georgia. You must pair it with khachapuri, the cheese-filled bread from Georgia topped with an egg, local butter and za’atar.

Sababa
Ashok Bajaj’s modern Israeli spot in Cleveland Park has the Zephyr Breeze ($12) on the menu. It mixes locally-produced Cotton & Reed Rum with pomegranate soda, rosehip and sumac, a Middle Eastern spice that adds a tart and lemony flavor.

Columbia Room
The last drink in the Tasting Room's brand new Distortion menu, whose cocktails manipulate attributes and have contrasting flavors and dissonant ideas, is meant is reset and provide mentality clarity. The unnamed libation stirs gin with Italicus (an Italian bergamot and rose liqueur), vermouth, maple and adified sherry, served with a raspberry-scented dry ice “cloud.” ($85 as part of a 4 cocktail, 4 bite menu; reservations required.)

Zaytinya
José Andrés’ always-crowded mezze concept serves up a Moroccan version of the Sidecar, a classic cocktail that usually mixes Cognac, Cointreau and lemon juice. The Sidecar to Tangier ($14) shakes brandy that’s been infused with rose, cardamom and cumin with honey and lemon.

The Green Zone
When the Adams Morgan Middle Eastern cocktail bar opened, they offered the Bikfaya Beauty ($13), named for a village in the mountains north of Beirut when the owners purchased a rare ingredient loosely translated as “perfume syrup”; the drink also featured Rujero Singani and rosewater. Unfortunately they ran out of the syrup, but they do keep rosewater on hand for guests that request a splash in drinks like a G&T or a French 75.