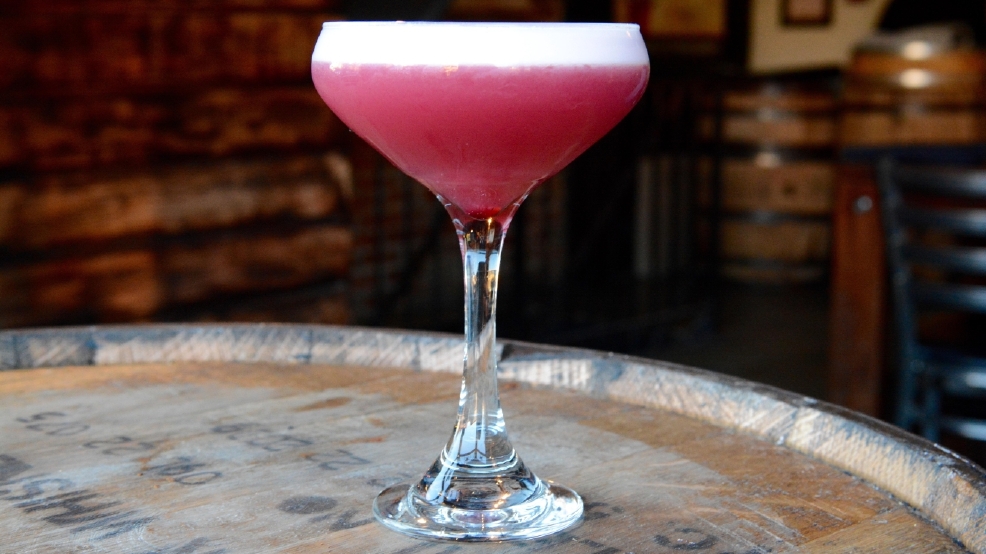 Be sure to try an original drink like the "Scarlett Rose" at this bar within a bar, The Armory inside Rebellion. (Image: Laura Hayes)
SEE MORE

The craft cocktail movement is cresting in the District, with bars like 2 Birds 1 Stone, Dram & Grain and Copycat Co. leading the charge. But what about the underdogs that are more quietly building drinks we remember long after the last sip? These eight bars sharing an underrated status are worth checking out next time you're craving a cocktail.

Sam Brooks is part man, part mad scientist. One look at the apothecary-like set up behind the bar at Alexandria's newest speakeasy will reveal potions like red miso and banana infused bourbon or house made prik khing curry soda inspired by Southeast Asia. Brooks folds these elixirs into a rotating list of cocktails you've never had before. Savory snacks like sliders are on offer, but sweet-toothed guests should sit down for this: Thanks to Captain Gregory's location inside Sugar Shack Donuts, you can order donut sundaes alongside your nightcap. Captain Gregory's is open Wednesdays-Sundays. Make a reservation by texting the phone number below.

Most make a trip to Macon Bistro & Larder in Chevy Chase for Southern staples like shrimp & grits. But, while you come for the food, you'll return for the drinks thanks to Andra "AJ" Johnson's boozy cocktails. Some lead with non-traditional spirits like "Sunset in the Andes," which shows off Bolivian Singani, a brandy made from grapes grown at high altitudes or "The Sideswipe," which puts cognac front and center. Another trend Johnson taps into are "beertails." The "Mind the Cyclists" combines fennel-coriander infused gin with egg whites and Troeg's La Grave Triple Golden Ale for a textural playground. For something special, try these cocktails Sunday evenings when classic movies play in the new Magnolia Room.

It's one hour until the puck drops at the Verizon Center, but unlike other Chinatown bars feeling the crush, there are stools up for grabs at Denson Liquor Bar. This art deco basement bar with only a set of lamps announcing its presence should be your new pre-game stop for libations. The dark and broody setting is romantic, making it hard not to make eyes with someone over a stiff drink. Stick to the classics like a Vieux Carré, so what you're sipping matches the scene. If you're feeling particularly celebratory, note that they just added a caviar flight for $144. Don't worry, there's also cheese and meat boards for a whole lot less. And oysters.

Even though it's a bar within a bar, The Armory doesn't want to be a speakeasy, according to beverage director William Scott Jackson who is going for a more laid back vibe. This new watering hole opened quietly in February inside Rebellion in DuPont. Jackson and his crew whip up classic cocktails, nips of bourbon and original drinks like the "Scarlett Rose." It's a balanced drink containing whiskey, house grenadine, freshly squeezed citrus juice and an egg white for foam. The cocktails are tasty enough that you may find yourself listening to the pin-up girl mural that encourages patrons to "drink more." Snack on deviled eggs or Burrata cheese served with toast and pickled cherry peppers. The Armory is open Wednesday-Saturday.

The Partisan came out of the gate hot. The Penn Quarter bar was even a favorite drinking lounge for the restaurant industry crowd. But since its Spring 2014 launch, the competition has gotten fierce thanks to D.C.'s restaurant and bar boom. It's time to bring your attention back to this cocktail and charcuterie powerhouse and #MakeThePartisanGreatAgain because what they do best is offer something for everyone including a full page of Lambrusco, an enviable sour beer menu and a whiskey list with well over 150 selections including rare, experimental drams. Then there are the cocktails that carry quirky names like "Everytime I Eat Vegetables" with whiskey, cognac, Benedictine and allspice dram.

The Royal is one of the café by day, bar by night establishments that are proliferating with great speed. Customers can pop a coffee and an Arepa in the morning and return post-work for house made vermouth poured from an antique fire hydrant and Lee Carrell's cocktail creations. Try the Aguardiente Punch with blackberry, vanilla, cassis and citrus because it stars a South American spirit that will pair well with the restaurant's Colombian-inspired cuisine. Check the bar's social media channels for "Royal Knights" updates. These once-a-month Monday events invite in guest bartenders to mix drinks.

Sure the words church & state might be popping up in headlines these days, but don't let that dissuade you from visiting this bar in the Atlas District that's full of personality and low on politics. Their tagline is, "this is not a church, and D.C. is not a state," despite the stained glass back lit windows and confessional booth. Much of the decor was lifted from real churches, and bar owner Erik Holzherr says it's meant to feel like a sanctuary away from the chaos. What sets Church and State apart even further is that every single product being poured is from the U.S. and its territories. Try one of the "Bill of Rights" cocktails or a "Seven Deadly Sins" cocktail. We like "Gluttony," which amounts to a flight of American small batch spirits like bourbon or moonshine.

DuPont's king of cozy McClellan's Retreat keeps guests on their toes by changing up the cocktail list each month with a new theme. For February, they featured a collection called "Swipe Right," to pay homage to all of the Valentine's Day Tinder dates, while March marked the Seven Deadly Sins and April ushered in classics with major twists as a hat tip to April Fool's Day. Bar men Brian Nixon and Chris Brygider dared to make a martini with tequila, for example. Thanks to an ever-changing cocktail list, McClellan's Retreat is a watering hole worth visiting monthly, plus it makes a great date spot.