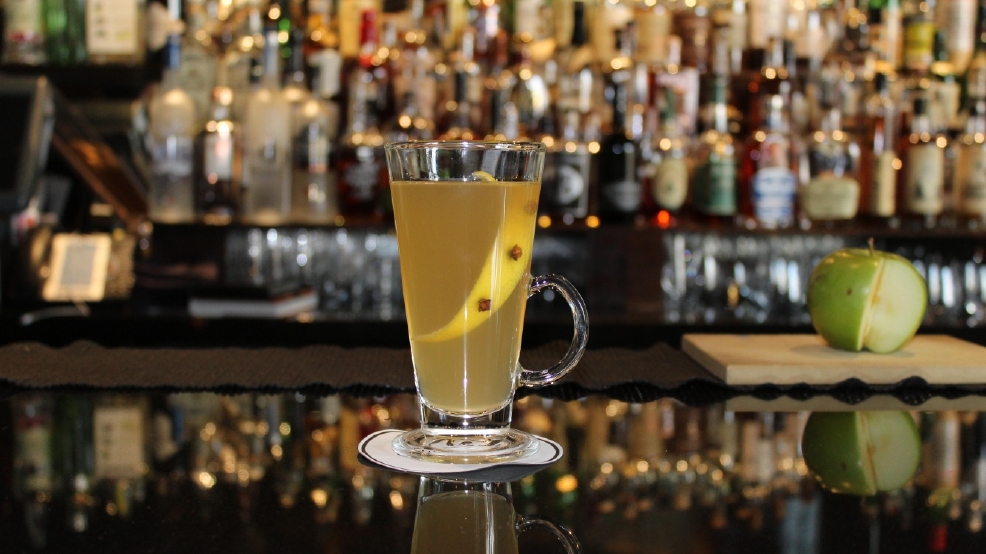 All those made-up food and drink holidays may be a marketing ploy, but Hot Toddy Day (January 11) can’t come at a more fitting time. The holidays are over, and the long, cold, depressing winter looms before us. D.C. bartenders are turning up the heat with boozy beverages tricked out with citrus juices, teas, infused spirits, honey and spices that are perfect après-ski or after work. Grab a mug and get steeped! (Image: Courtesy The Rye Bar)
SEE MORE

All those made-up food and drink holidays may be a marketing ploy, but Hot Toddy Day (January 11) can’t come at a more fitting time. The holidays are over, and the long, cold, depressing winter looms before us. D.C. bartenders are turning up the heat with boozy beverages tricked out with citrus juices, teas, infused spirits, honey and spices that are perfect après-ski or after work. Grab a mug and get steeped!

Proof
Fat Baby Restaurants bar director Adam Bernbach says this cider, made by fat washing white rum with butter, has a rich quality that warms you from the inside that much better. “A good Toddy rejuvenates,” he says. “When it’s the coldest [and] the darkest, a Toddy warms and lifts the spirit.” We couldn’t agree more, and this one is especially delicious on the most frigid of evenings.

Melt the butter, pour it into a container with rum, and mix to combine. Freeze the mixture, and when the layer of butter solidifies at the top, strain the rum through chinois. Toast the cinnamon sticks and star anise pods and break them up (without grinding.) Place them in a cheesecloth pouch and tie it at the top with butcher’s twine, reserving enough string to hang over the side of a pot. Heat the cider to a simmer. Add the brown sugar, blending until completely dissolved. Add the lemon juice, amaro and rum, then place spice pouch in the cider, steeping until desired flavor is reached. Ladle into mugs and serve.

The Riggsby
Assistant general manager Chris McNeal has always loved a good Toddy, as well as a Hot Buttered Rum, but admits the latter usually isn’t very visually appealing. “This is a take on a hybrid between the two: getting the mouthfeel of a Hot Buttered Rum and a classic Toddy.”

Build all ingredients in a mug, stirring to combine.

Occidental Grill & Seafood
“Whether drinking for your health or to warm up, we are revisiting this classic with our own local spirit, Copper Fox Rye from Sperryville, Virginia, Four Roses Bourbon, honey, and black hot tea with vanilla [to] add a touch of sweetness,” says bar director Aubrey Walkins. “Combined with clove syrup, lemon, and Angostura bitters,” she notes it’s a way better cure for the common cold than any cough syrup or capsule.

Build in the glass, stir to combine, and garnish with a lemon twist.

*For the infused syrup: Combine 1/2 cup water and 1/2 cup honey in a saucepan, and simmer until the sugar dissolves. Remove it from the heat, add 1 black tea bag, 1 scraped vanilla bean pod, and 4 cloves. Steep until desired flavor is achieved, then strain out solids.

Bourbon Steak
Head bartender Torrence Swain’s DIY Toddy is a complex mixture of Drambuie, black tea, cinnamon, star anise, lemon and orange, served with the guest’s choice of Barr Hill Gill, Jameson Irish Whiskey, Bulleit Bourbon, Hennessy VS Cognac or Avion Reposado Tequila. "A Hot Toddy is truly a great overall winter remedy,” he says. “It can take away a chill, calm a cough and give you the strength to brace yourself to head out into the elements -- or it can just as easily warm you up after being out in the cold." He adds that the Toddy is one of the oldest cocktails still around, dating back more than two hundred years, and while you can definitely spiff it up with artisanal teas, different spices and craft spirits, simplicity is ultimately most satisfying.

Acadiana
“Toddies are like alcoholic Theraflu,” Passion Food Hospitality wine and beverage director Scott Clime declares. “[They have] honey to soothe your throat, hot liquid to warm you up and alcohol to numb.” Whatever ails you this winter (even if it’s just a dreary grey sky and the Polar Vortex), Acadiana’s simple mix of Jim Beam Honey Bourbon, lemon juice, orange, honey and cinnamon will fix you right up. (Pro tip: when making a Toddy, Clime suggests heating the glass by filling it with hot water while you get the other ingredients ready to keep the beverage warmer longer.)

Blue Duck Tavern
The Toddy takes a decidedly exotic turn at the restaurant and bar at the West End’s Park Hyatt Hotel. Blue Duck Tavern’s Chartreuse Hot Toddy mingles Green Chartreuse with toasted cardamom, lime and gin that’s been infused with genmaicha, a mixture of green tea and brown rice. Lead bartender Cole Burger is especially drawn to Chartreuse, which has been produced by French monks for more than three hundred years--no one knows the entire recipe--especially the vibrant, striking hue of the green version, which is more herbal and not as sweet as its yellow counterpart. “When heated to a near boil and poured into a glass mug, the Chartreuse Hot Toddy sits on a table like a shimmering, perfectly pure emerald and it is easy to see why its tone has been adopted as its own official color,” he muses.

All Set Restaurant & Bar
The inspiration for the Toddy at this New England seafood restaurant in Silver Spring was twofold, explains assistant general manager Molly Horn: to create an easy-to-execute drink for busy happy hours, and to multitask the chai syrup and cinnamon-infused whiskey used in other drinks. The result combines both with lemon juice, and a splash of Falernum. “What makes a good Hot Toddy? A conglomeration of strong herbal flavors with enough of a kick to balance out the ‘heat' of (hot!) booze, as well as the perfect temperature (between 115-120 F) so as to not scald the tastebuds but still be enough to warm the stomach,” says Horn.

Ambar (Capitol Hill)
Named for the area of Serbia known for producing the best quality rakia (fruit brandy), the ?umadija Hot Toddy mixes slivovitz (plum brandy) with sugar, water and Becherovka, an Eastern European herbal liqueur, that’s garnished with a cinnamon stick and star anise pod. "In our homeland, it is mostly consumed on Christmas, but we use that as inspiration to warm one's spirit in a traditional way throughout the winter season,” explains general manager Uros Smiljanic.

The Rye Bar
Cozy up with that special someone and sip the Hot Toddy for Two at the handsome bar at Georgetown’s Rosewood Hotel. Made from a combination of Buffalo Trace Bourbon, hot water, honey syrup, lemon, rosemary sprigs, ginger, lemon peel, orange peel and chamomile tea, it’s fragrant and comforting. “The secret to a good hot toddy is balance,” notes bar supervisor Girts Mihalkins. “Balance between the sweet, the citrus, the spice and the alcohol.”