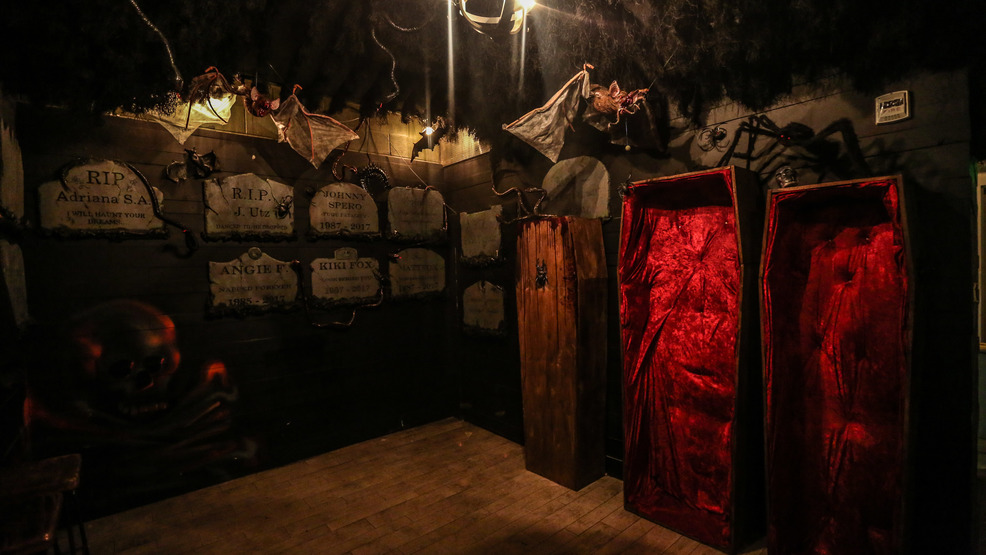 Last spring while chatting over cocktails with Derek Brown and Paul Taylor at their Cherry Blossom PUB, I asked them if they’d ever consider doing a Halloween pop-up bar. They gave each other a knowing glance, and honestly I’ve been crossing my fingers ever since. (Though I’m too afraid to hit up the most frightening haunted houses and attractions, I loooove the holiday.)

On October 1, after a well-produced theatrical trailer that dropped a week or so beforehand, Derek, Paul and the rest of the Drink Company team unveiled PUB Dread, turning their three bars in Shaw into a spooky, creepy space with dolls, spiders, skulls, a haunted tree, an homage to David Bowie and cocktails inspired by It, Beetlejuice and other horror flicks.

It’s loads of scary fun--here’s what to expect:

As with all of their pop-ups, you’ll most likely encounter a long line around the block, which will no doubt get more brutal as the month draws on. PUB Dread is open now through October 31, Monday through Thursday from 5 p.m. to 12:30 a.m., Friday and Saturday from 5 p.m. to 1:30 a.m., and Sunday from 1 p.m. to 12:30 a.m. On the preview night, Angie Fetherston told me that wearing costumes is encouraged (she was dressed as the Queen of Hearts), and she expects seeing more guests dressed in them as we get closer to All Hallow’s Eve. This is your chance to be a kid again (albeit with alcohol), so pull out all the stops before heading over to stand in line.

The bar is constructed and designed by Drink Company’s special projects team, made up of director Matt Fox and manager Adriana Salame Aspiazu, and touts four unique spaces. As you walk in and turn left, the former Mockingbird Hill space has been transformed into a Haunted Forest (the tree is actually leftover from the Game of Thrones pop-up which ran this past summer). You’ll also see a fair share of hanging ghouls, spiders, watching eyes, weird creatures and skulls. (A spiderweb that spells out “PUB Dread” in the front window make a perfect backdrop for a drink photo.) Back in The Crypt, tombstones are joined by righted lifesize coffins that you can stand-in for that Instagrammable moment.

Across, where whiskey bar Southern Efficiency used to live, The Dollhouse just might be the creepiest bar of the whole space. Shelves of legitimately terrifying dolls lines the front wall and the back bar. (The scariest, Angie pointed out to me, is a girl who resembles Chucky, with her head tilted at an odd angle and dead, dead eyes. Still gives me the chills.). Another doll over the bar slowly swings, and animated portraits flank the walls: one minute they resemble normal Victorian-era people, the next they morph into the undead. The weirdest part of designing that room, Angie told me, was that one doll (she didn’t tell me which one) seems to be definitely haunted; whenever she had it laying nearby, her phone would start typing and writing on its own. Yeah, pretty freaky.

Finally, the back room (formerly the Game of Thrones Throne Room) and the Eat the Rich space are odes to The Thin White Duke. Why, I asked Derek, “Why not? Who doesn’t like David Bowie.” Only people who are dead inside, that’s who. A Ziggy Stardust mural provides another selfie opp, and a purple glass spider light on the ceiling of the Space Bar is joined by album covers and neon lightning bolts on the back bar. (Lest you still can’t see the connection between Bowie and the October holiday, he released a song in 1980 called “Scary Monsters”, and his ever-changing personas were more elaborate than any Halloween get-up.)

The menu has ten cocktails all priced at $14, one shot, two n/a drinks and several beers and wines, and all are available at each of the bars. A few can be on the sweeter side (hey, this is a holiday about candy, right?) My favorites on the less-unctuous side are It’s Pronounced Fronk-En-Steen, with Belle Meade Bourbon, salted cucumber, semi-dry cider and apple cider; Do You Like Scary Movies, with vodka, Aperol, Cointreau, Americano Vermouth, orange, bitters and blood orange soda, garnished with skull candy; and We All Float Down Here, a Manhattan riff with peated Scotch, Lot 40 Rye, sweet vermouth cream sherry, creme de cacao and bitters. The latter, inspired by the character Pennywise from It, is garnished with a red foam clown nose on the coupe’s stem. Shudder-inducing.

If you want to order Brains, with Alexandro Sherry, brandy de Jerez, Luxardo, cinnamon grapefruit oleo, fig and lime, be prepared to surrender your driver’s license as a deposit: the drink comes in a cool porcelain skull mug that guests just might walk off with in their handbags otherwise. If you are in the mood for a beer, the Southern Tier Pumpking ($9) is surprisingly mellow in its pumpkin spice profile. You can also nosh on fun snacks like pumpkin seeds, spicy jalapeno Zombie Takis, Bugles, salumini or oreo lollipops. Oh, and a Peanut Butter Cup Shot ($7) is a sweet ending, with Catoctin Creek Rye, amontillado Sherry, creme de cacao, peanut butter and salt.