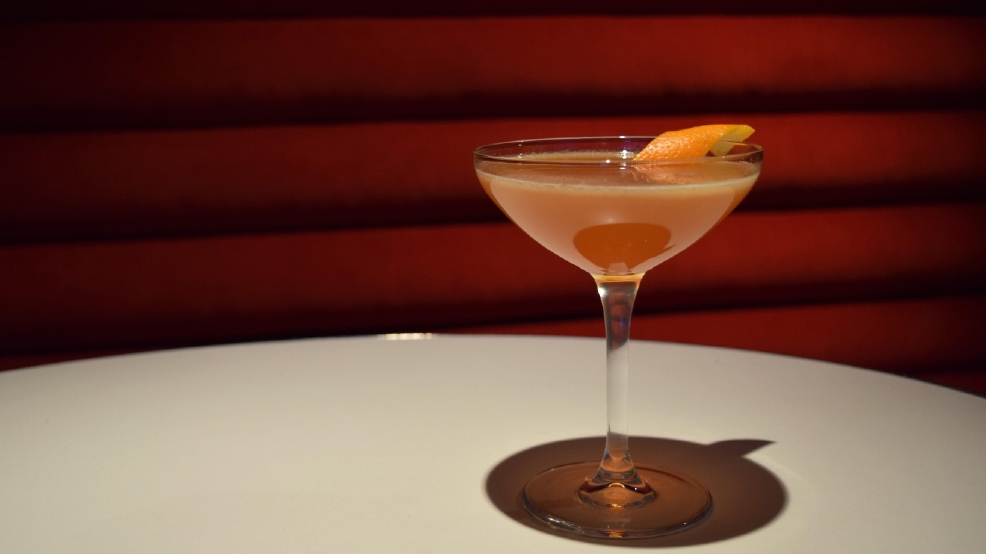 Bitter about Valentine&rsquo;s Day? These cocktails will help you embrace your cynical side

Maybe you’re still reeling after having been inexplicably ghosted by someone who told you how much he’s in love with you, daydreams about you constantly and could see himself with you forever. Or perhaps you’re the one who did the jilting and the spurning, and now you find yourself alone on the most romantic night of the year. Either way, you just can’t get into the sappiness, hearts, chocolates and flowers associated with February 14--let alone all that ghastly red and pink. These bartenders feel your pain.

The LeDroit Park bar’s latest Royal Knights industry night series promises to shine the spotlight on everything there is to hate about love. On Monday, February 13, from 9 p.m. to 1 a.m., guest bartender Rachel Sergi from The Watergate Hotel’s Next Whisky Bar will collaborate with in-house bar team on a menu of vermouth-, amaro- and fernet-based libations. All drinks are priced at $8, and guests can drown their sorrows to a soundtrack of 80s rock love ballads and Fatal Attraction-esque movies played on a projector all evening. Sergi’s drinks include Swipe Left, with Aylesbury Duck Vodka, Sfumato Rabarbaro, white pepper syrup, lemon and Ass Kisser Strawberry Wit beer; Total Eclipse of the Heart, with Hayman’s Sloe Gin, Royal Dock Navy Gin, Cardamaro, rosemary syrup, lime, Angostura Bitters, egg white and black salt; and Heart Shaped Box, with Byrrh, mandarin syrup, Bittercube Corazon Bitters and sparkling wine, garnished with a rose petal. The Royal team’s drinks include Never Trust the Loving, with Rujero Singani, cold brew coffee and lemon, and Love Potion #13, a bottled cocktail with Cappelletti, Cardamaro and seltzer. A Bitter Boilermaker ($4) includes a tiny bottle of Underberg, a German digestif, paired with a Miller High Life. All drinks are guaranteed to leave a bitter taste in your mouth as you plot revenge on your ex-lover, Alanis Morissette-style.

The Kensington, Maryland American bistro is offering up an anti-Valentine’s menu named for the Pat Benatar song Love is a Battlefield. On February 14, the “It’s Not Me, It’s You” happy hour for singles runs 5-6:30 at the cocktail bar, with bar bites and liquid options like Shot Through the Heart ($6), a shot of Tequila and a sympathetic ear; and Dark, Stormy and Divorced ($8), rum and ginger beer served separately (of course.) Snarkily-named options on the dinner menu are joined by a libation called As Dark as My Soul ($15), a Manhattan served on the rocks with a chocolate-bacon cigar. Co-owner Zena Polin recalls the time she broke up with a long-term boyfriend around Valentine’s Day, but as a restaurateur was expected to create a warm atmosphere and toast to all things lovey dovey. For fun, she made it a singles event to celebrate Anti Valentine’s Day. “I'm from New York and created the drink as a play on words and memories,” she says. “Late nights in the city, feeling like a lost soul and a rocky relationship became [a take on the classic Manhattan].”It combines Maker’s Mark Bourbon with sweet vermouth and bitters, and she sprinkles a little sea salt over the drink because, as she puts it, who hasn’t cried over a cocktail? Trust us, he or she isn’t worth it. Now order another and revel in your independence.

In sticking with the Capitol Hill lively spot’s music theme, all of the drinks on EatBar’s anti Valentine’s Day menu are named after 80s breakup songs--and incorporate bitters and bitter liqueurs. “We've always liked using amari and bitter spirits in our drinks because they add a level of complexity that's hard to match with your standard bases,” explains Peter Koll, director of operations. “Naturally, we didn't want to pass up the chance to do an all bitters menu for the love-saturated weekend.” Cocktails (all priced at $13) include The Cure’s Pictures of You, with Bourbon, Angostura Amaro, Punt e Mes, walnut liqueur and spiced coffee liqueur; the Violent Femmes’ Kiss Off, with barrel-aged gin, Zucca, Byrrh, true kola syrup and old fashioned bitters, and The Smith’s I Know It’s Over, with Cappelletti, Kina, Breckenridge Bitter, lime juice, egg white and Peychaud’s Bitters. Nobody knew how to emote pain like 80s New Wavers.

Even this ultra-romantic restaurant tucked away in a quiet street off Dupont Circle is embracing the gloomy side of Hearts Day. For A Black Manhattan Where My Heart Once Was ($13), spirits manager Nick Farrell’s southern Italian Manhattan riff, he fat washes Bourbon with cocoa butter, steeps it overnight in cocoa shells and then smokes it. It’s stirred with Amaro Lucano, vermouth and bitters, and garnished with a chocolate-covered maraschino cherry. “The result is a Manhattan with a chocolatey nose and no added sweetness,” he notes. I Wish I Knew How to Quit You, Negroni (Lies, Damn Lies) ($13) contains the bright red color--but none of the traditional ingredients--in a classic Negroni (hence the name.) It mingles Rinomato, Carpano Bianco, dry vermouth and Grappa Italian Caffo, a southern Italian grappa that’s steeped with botanicals including juniper, citrus peels, rosemary, angelica root and coriander. “For Valentine’s Day, we decided to add a Rinomato (a Southern Italian red bitter liquor similar to Campari) heart-shaped jello shot.” Of course.

Last year, the brewery/brew pub adjacent to Nats Park collaborated on a beer for Mardi Gras with Great Raft Brewing Company in Shreveport, Louisiana. The brew was a Saison of mixed fermentation (meaning multiple strains of ale yeasts and Brettanomyces were used to ferment it). Dubbed “Mixed Feelings, it was a nod to both those different yeast strains, and “some of the less cheerful aspects of romance,” says beer director Greg Engert. The collaboration was such a success that they decided to repeat it. This year’s offering is “It’s Me, Not You,” a Saison-style, low abv, crisp and hop-forward Pale Ale with strawberry and citrus aromas, and oats for round body and richness on the palate. No matter who you are blaming for your failed relationship, you can sip this at Bluejacket for $7 a glass.

The crimson-hued bar at the Kimpton Rouge Hotel in Dupont Circle will host a Bitter Valentine’s Day event on February 14 from 6 p.m. to close. Guests can recount relationship horror stories while sipping bitter libations from lead bartender Naderia Wynn and watching some of the least romantic movies ever made. Drinks, all priced at $14, include Hedy, I Don’t Want a Puppy (inspired by Single White Female), with Jim Beam Bourbon, China China Liqueur, St. Germaine, lemon and orange; Rebecca, Have You Seen Cuddles? (inspired by The Roommate), with Beefeater Gin, aperitivo, Dolin Blanc Vermouth, grapefruit cordial and hibiscus; Martin vs. Ben (inspired by Sleeping With The Enemy), with Ilegal Mezcal, Cardamaro, vanilla and Punt e Mes; and Peyton! Joey Isn’t Your Baby! (inspired by The Hand That Rocks the Cradle), with Tito's’ Vodka, Suze Saveur d’Autrefois Liqueur, grapefruit, honey and soda. And if you find yourself stirred to action by any of the diabolical characters depicted in these films, maybe dial it back just a tad.