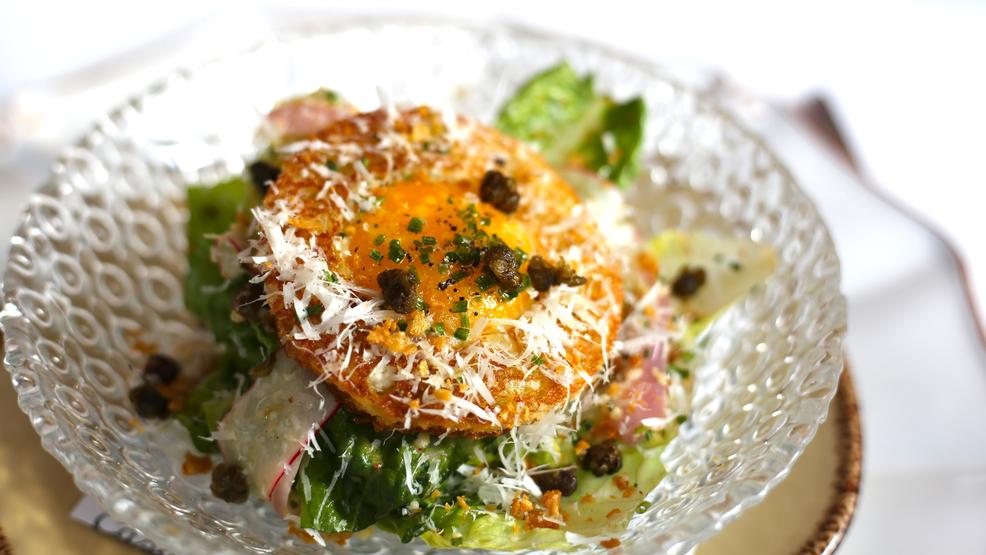 What makes the Caesar salad at Sfoglina stand out is the piece of toast with a fried egg cooked in a circular cut-out, perched on top. (Image: Courtesy Sfoglina)
SEE MORE

Are Caesar salads making a comeback?

When talking about a recent meal with a food editor friend of mine, she asked in a shocked tone, “You ordered a Caesar salad?!” A year or so ago, I might have reacted with the same raised eyebrows. The ubiquitous salad is what you order when you want to play it absolutely safe, like at a train station fast-food joint or when your great aunt drags you to a Ruby Tuesday. It’s not generally something an experienced or adventurous eater generally orders, yet it’s starting to appear on some of the city’s hottest menus. Here are five unexpected places to satisfy your most #basic salad cravings.

Available at both locations during lunch, this outstanding salad features a bed of crisp romaine dressed with Caesar, topped with capers and a flurry of grated Parmesan. What really makes it stand out is the toad-in-a-hole, or a piece of toast with a fried egg cooked in a circular cut-out, perched on top. But if you want to amp up the protein, or the luxury, diners can add 72-hour short ribs or lobster.

The Caesar here starts with a head of romaine hitting the grill in order to coax out a lightly smoked element to the dish. It's topped with shaved fennel and Parmesan, then drizzled with a nori Caesar dressing, all made in-house. The salad was added to the new lunch menu in August, and should definitely be ordered alongside chef Tae Strain’s addictive bing bread.

Morning sous chef Demetri Mechelis recently added a charred Tuscan kale Caesar to the lunch menu. “It’s been done a million times by a million chefs,” he says, “but it’s just so good, and people love kale, and Caesar dressing is pretty much umami, so why not put them together?” Crunchy chickpeas seasoned with Aleppo pepper add a spicy kick, and the salad can be ordered without the white anchovies.

Next time you’re seeing a show or sipping some wine at D.C.’s newest winery, make sure to turn up hungry. The addition of red and white quinoa to the already healthy kale base punches up the nutrition factor of this Ivy City hot spot’s Caesar salad. The salad is available for dinner in both the restaurant and in the upstairs music venue, and grilled marinated chicken can be added to the mix for an additional $6.

Chef Demetrio Zavala clearly appreciates the deliciousness (and the popularity) of the Caesar, adding versions to most of the restaurants he oversees, including Lincoln and Teddy & The Bully Bar. At the restaurant group’s pizzeria, with locations in Shaw and near the ballpark, he’s serving a Caesar loaded with mushrooms and parsnips, shaved Sottocenere cheese, Belgian endive and truffle-rosemary Caesar dressing. It’s available at lunch and dinner, and steak or black truffles can be added on for an extra dash of indulgence.