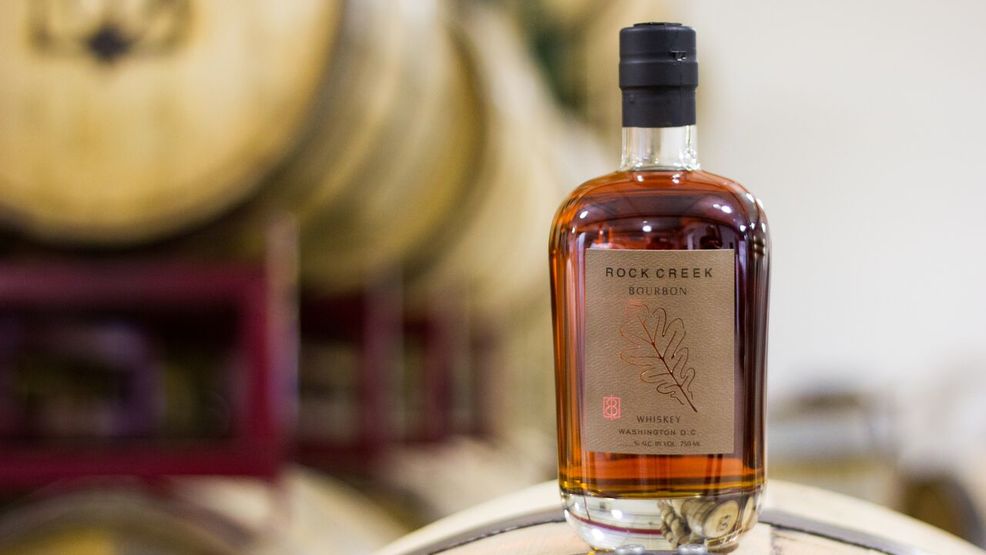 After resting in barrel a little over two years, it was ready, with great oak extraction and maturity balanced with grains sourced , says co-founder and head distiller Alex Laufer. The spirit is produced with a four-grain mash bill of locally sourced corn (58%) and wheat (7%) from Land’s End Farm on Maryland’s Eastern Shore, rye (17%) from Fairview Cattle & Grain in Culpeper, Va., and malted rye (13%) and malted barley (5%) from River Bend Malt House in Asheville, NC.

“We wanted a balanced Bourbon that was well-integrated and captured the ethos of One Eight, which is grain forward, original interpretations of each spirit type that we make,” adds co-founder Sandy Wood. The resulting bourbon gleans vanilla and caramelized sugar notes from the oak, the sweetness of corn balanced by dry oak, rye spice and toasted malt and caramels.

The duo is obviously pretty stoked about the release. “It’s incredibly gratifying,” Wood admits. “We’ve been patient, waiting for more mature notes to emerge and develop in our Bourbon, so to see that come to fruition is something we are all very proud of.” They’ve consulted with spirits historians, and while there were some Bourbons blended and bottled in D.C. before Prohibition, they can’t find evidence of any having been distilled here--which makes theirs even more noteworthy.

In addition to the distillery’s Tasting Room, the Bourbon will be offered at a variety of local bars, restaurants and retailers--you can learn more on the Where to Buy page of their website. On Friday, September 15 from 7-10 p.m., a Distiller’s Dinner at the distillery with chef Matt Baker of the upcoming restaurant Gravitas will give diner’s an intimate preview of the whiskey before its official release. And on September 16, the official release party from 1-5 p.m. will feature tastings, cocktails, corn doughnuts from Astro Doughnuts and Fried Chicken, elotes from Tortilladora, sweet corn gelato by Dolcezza, live entertainment, a vintage glassware pop-up shop and a bottle engraving service. This event is free and open to the public with no tickets required.

Here are some other places around town to celebrate September's Bourbon Heritage Month:

Proving that afternoon tea isn’t just for ladies in flowered dresses and white gloves, the Ritz Carlton in Tysons Corner debuted its Gentleman’s Tea this month, which will run until October 28. Offered on Friday and Saturday afternoons. The tea (priced at $64 per adult) features a two-course menu of savory and sweet bites with a choice of steaming (and cold) whiskey-based libations--including a few made with Bourbon. “Tea” tipples include Manhattan tea, a lighter version of the classic cocktail with Woodford Reserve Bourbon, chilled four fruit tea and sweet vermouth, served up in a cocktail glass with skewer of cherries poached in kirsch (this is the only beverage of the four served chilled.). Wild Herb is a light and delicate option, with chamomile tea, Jameson Irish Whiskey and honey. Citrus Shot pairs a fruity rooibos citrus tea with Bulleit Bourbon and honey. Most distinctively flavored is the Tennessee Gentleman, with Gentleman Jack and a caramel blend tea; an Ashton cigar is lit, placed into a Smoking Gun smoking tool and the smoke is infused into the pot of tea.

To celebrate Bourbon Month, The Yard at the D.C. hotel will be serving speciality cocktails and snacks all month. Nosh on braised beef meatballs with Kentucky Bourbon sauce ($12), crispy chicken wings with spicy honey Bourbon sauce ($14) and housemade potato chips with seasoned Bourbon sea salt ($8). Order one of three Bourbon cocktails for $15 each: a Ginger Smash, Whiskey Sour riff with orange marmalade or a Blackberry Mint Julep. Coming in with a few friends? Opt for a pitcher of Blackberry Mint Juleps for $50.

It’s not surprising to think that the Adams Morgan bar would be paying homage to its namesake hooch. Each week in September, they are featuring a revolving Manhattan priced at $10 each (and $8 during happy hour.) It’ll be stirred with Redemption Bourbon the first week, then Four Roses Small Batch, High West and Angel’s Envy. On September 13, the bar will launch the Whiskey Library’s Whiskey School, where aficionados can glean some lively, date-friendly nights of whiskey tasting and conversation.

The Western Hemisphere’s largest whisk(e)y mecca--home to more than 2,700 bottles from around the world--is celebrating Bourbon with events from September 13 to the 18, as well as month-long dram and flight specials. Daily specials from labels ranging from Willett to Pappy van Winkle will let guests taste cult favorites and rare spirits. (And the bar will donated $1 to ALS research in honor of Parker Beam for every ounce of Bourbon distilled by Heaven Hill sold during the month.) On September 13 from 5-10 p.m., 10 Firestone Walker beers will be paired with a “doppleganger” Bourbon at a Twin Peaks-themed FIREstone WALKer With Me party. September 14 sees the Classics & Spinoffs Bourbon Cocktail Takeover, with six Bourbon libations from the Manhattan and Boulevardier as well as six creative riffs offered for only $10 each. Check their website for the full list of specials and events.