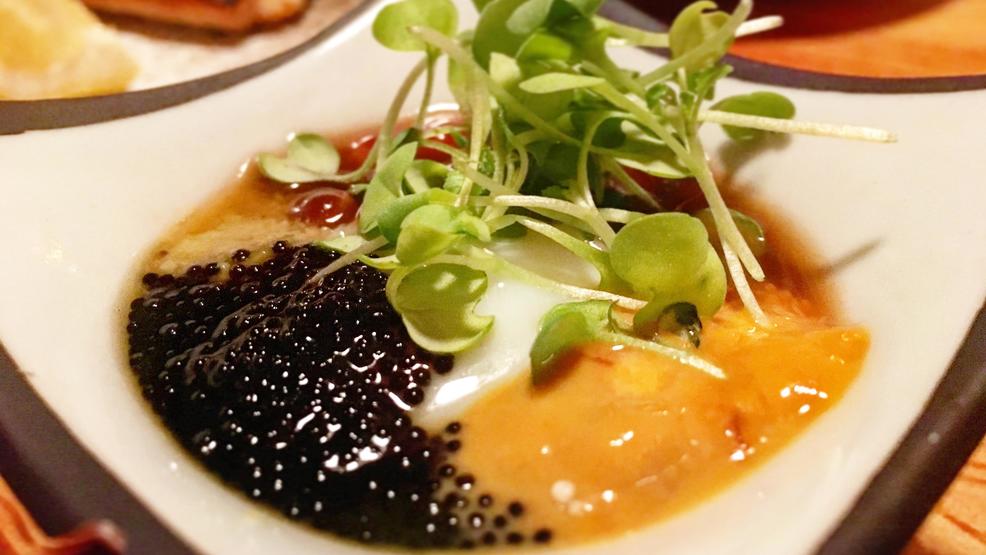 Daikaya's second-floor izakaya serves up some interesting twists on Japanese bar food – everything from portions of grilled liver and okra to a foie gras-topped beef patty. And one of the most eye-catching dishes takes its name not from Japan, but from a popular fictional hero from Philadelphia. Layered with quail egg, sea urchin and marinated salmon roe, chef Katsuya Fukushima's clever "Rocky Balboa" reads like a culinary dare fit for the most outgoing eaters.

Fukushima recalls developing the dish with the goal of making something built with different types of eggs, inspired by a project he'd experimented with during his time cooking at José Andrés' minibar. He says the eventual creation reminded him of Rocky Balboa's famous training meal – a raw egg chugged straight from the glass. Daikaya's take is much more than a simple egg, though, featuring high-quality items including uni, fresh wasabi and a homemade dashi.

Fukushima set out to make a broth that would be flavorful without masking the various components. He serves the "Rocky Balboa" with a soy sauce diluted with housemade dashi, a delicate cooking stock made from kombu (dried seaweed) and bonito flakes, among other ingredients. In his mind, it's the most important component.

“It carries the soy sauce and it holds all the other components in the liquid," he says.

Then there is the quail egg, which gets poached in the style of the Japanese onsen egg, traditionally cooked in hot springs. Each gram of egg weight calls for precisely one minute of cooking time.

Keeping with the “shooter” inspiration, the dish gets a splash of sake (the alcohol is cooked down by about half strength before it's added, allowing for a concentration of rice wine’s flavor and sweetness) along with a touch of grapefruit juice for a little bitterness, sweetness and acidity.

The complete plate is certainly able to be slid into the mouth in one swift gulp, but getting the full affect is all about slowing down and savoring.

“I didn’t want it to be a shooter, just because I always feel like with a shooter you’re basically drinking it and not really tasting it,” Fukushima says.

He recommends diners sip and chew it in order to let the flavors develop, similar to enjoying a raw oyster.

Fukushima says the name alone has drawn attention from dinner guests, and he's glad to be able to offer something that is fun while also showcasing Japanese techniques and tastes.

“It highlights really good ingredients, and I have it on the menu just because there are people out there who are willing to try it,” he says.

Still, he says, there’s no getting around the fact that the dish is a bold order for non-adventurous palates.

“I don’t recommend it to everyone,” he says. “It’s a hardcore dish.”