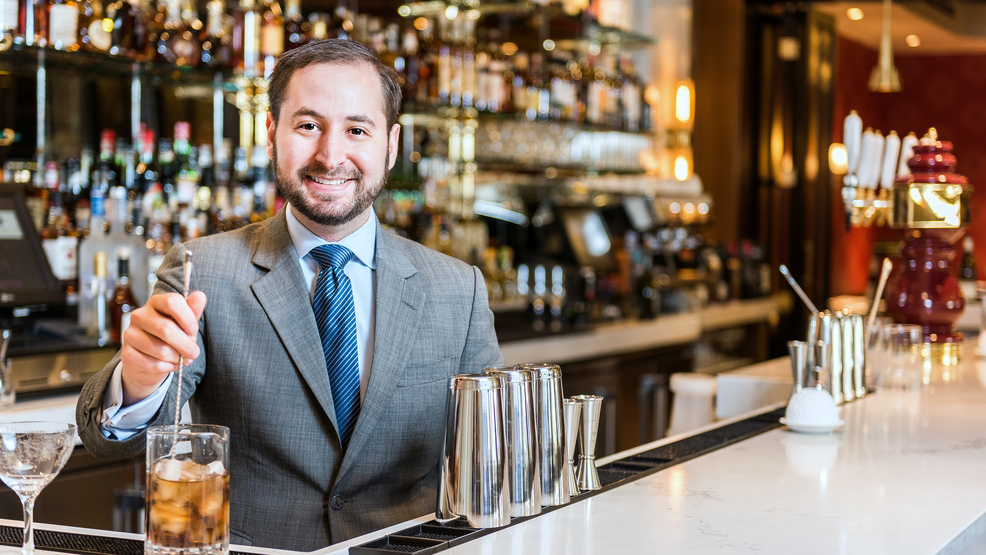 D.C. represent! The official drink at Tales of the Cocktail is from Mirabelle's Zach Faden

Each July, thousands of bartenders, media, publicists and enthusiasts converge on New Orleans for Tales of the Cocktail. If you’ve never experienced it, it’s difficult to describe; for those of us who make our yearly trek to the Big Easy for seminars, tastings, dinners (and yes) parties, it’s five days of education, drinks, food, culture and a little (or a lot) of craziness.

Before each Tales, there is a competition to determine the event’s official cocktail. This year has been deemed the Year of the Martini, and bartenders who competed for the winning drink were required to use four or fewer ingredients from a list of participating products--including a base of gin or vodka--in an original creation that stayed true to the definition of a Martini but elevated or tweaked it in some way. Judges based their decision on originality, use of product, taste and presentation.

After sampling hundreds of recipes from around the world, the judges announced the winning drink last week: Embrasse de la Terre from Zach Faden, lead bartender at the new French-American influenced Mirabelle. Faden’s version combines malty genever, aromatic and delicate dry vermouth, sweetly herbal yellow chartreuse and savory celery bitters in a take he describes as “clean and crisp, with herbal and vegetal notes.” It’s currently available at Mirabelle, and will officially be on the menu soon. (It’ll also be used in a toast to kick off Tales next month, and promoted throughout the week.) We asked him about the winning drink, what stirs him behind the bar and what he’s most looking forward to while attending his first Tales:

Congratulations on winning! What was the inspiration behind the drink?

The Martini is a classic cocktail with an embracing nature and an evolving identity. Nevertheless, despite its prominence, it remains a very personal drink--there is no one authoritative recipe. Martinis were most likely first made with Genever or Old Tom gin, so I wanted to respect the drink’s history, while also innovating. Rutte Old Simon genever fits the historical narrative of the drink, but also incorporates notes of nuts and celery. I enjoy the modern sensibility of dry vermouth, and in particular, really like Dolin’s. Older recipes of the Martini occasionally call for a sweet modifier such as maraschino or Curaçao, but I replaced this ingredient with Yellow Chartreuse which adds richness, a touch more viscosity, and herbal undertones. The classic Martini usually contains orange bitters, however, I felt that The Bitter Truth Celery Bitters provided more harmony to the drink and reinforces its clean, vegetal character.

How far can a drink stray from the strict definition and still be considered a Martini?

In my opinion and knowledge of drink history, a Martini is a booze-forward marriage of spirit (gin, genever, or in accordance with modern preference, vodka) and vermouth. In recent years, the vermouth component is occasionally omitted, though I do enjoy its softening and rounding of the drink. Beyond that, I think Martini-variations are open to the creativity and playfulness of the bartender.

Tell me about the moment you found out you won:

I was heading home from work and just checked my phone for the first time that evening. I was stunned--I re-read the email several times to confirm it.

Is there a dish from Mirabelle’s menu that you think pairs well with it?

I think it pairs well with the Maine Lobster Salad, which is served with fennel panna cotta, roasted spring carrots and Marcona almonds.

What stirs you behind the bar right now? What’s your cocktail philosophy?

For Mirabelle’s bar program, I am interested in first and foremost making delicious drinks that the guests enjoy. Additionally, I am trying to use French spirits throughout the cocktail menu, and I am very proud of our absinthe program. My philosophy is to celebrate the history of cocktails and drink-making. The menu contains an assortment of classic cocktails, modern classics, and the staff’s creations, and we aim to stress the flavor of the utilized spirits.

This will be your first Tales of the Cocktail--what are you most excited about doing or seeing?

I am most excited about joining the vast community of bartenders, spirits makers, writers, and cocktail lovers. There is so much to share and learn, and this is the greatest opportunity to do so.

Combine the ingredients in a mixing glass with ice. Stir to chill. Strain into a chilled coupe.