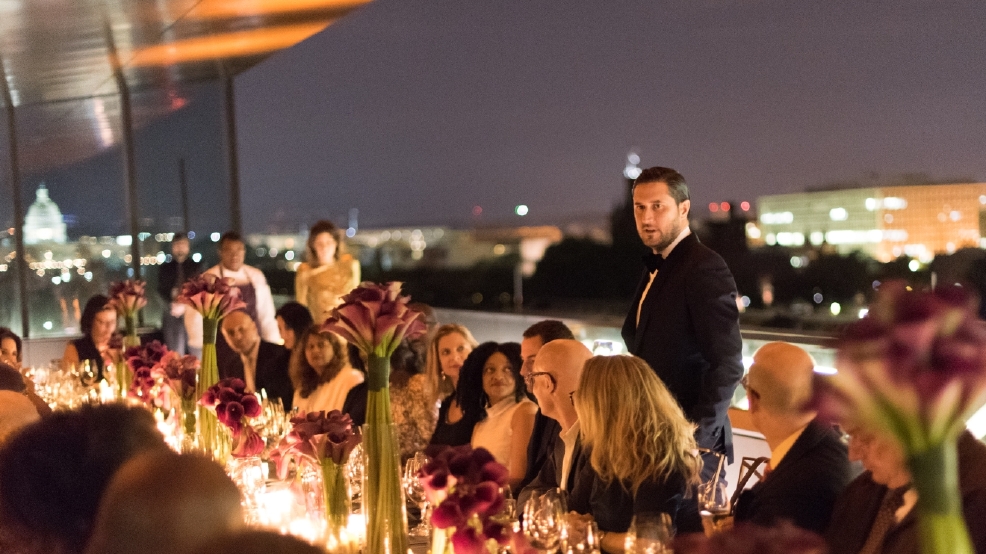 Dining with Kwame Onwuachi at the African American History Museum

Timed tickets to the Smithsonian Museum of African American History and Culture are free. Unfortunately, the demand is so high that they are unavailable until March 2017. But for a lucky sixty or so of us last week, there was a workaround to enter the much-anticipated, just-opened, museum. After hours in the shadow of the Washington Monument as the backdrop, no less.

On October 6, 2016, Dom Pérignon Champagne hosted a dinner honoring the opening of the museum and celebrating the achievements of its Ghanaian British designer, David Adjaye. “Being here is a magical moment,” Adjaye told the crowd, adding that he tackled the project of designing this museum by keeping in mind that it’s far from just a building, that its story and context mean so much more, to so many more. He also admitted that his wife Ashley, also in attendance, endured “lots of pain” during the seven years that the design process took place. “So it’s nice to be drinking Champagne.”

Chef Kwame Onwuachi, whose high-end prix fixe restaurant The Shaw Bijou opens in November, created a four-course meal designed to explore different eras and regions of African American cuisine -- much like the museum’s food court the Sweet Home Café, where you can order everything from hoppin’ john to étouffée. The well-dressed crowd included friends, media, museum staff and artists.

The night kicked off with a Champagne reception (of course) in a private room on the museum’s fourth floor. Guests snapped selfies using the inside of the canted metal-paneled façade as a backdrop, and were able to explore (sans champagne) exhibits on music, pop culture, theater, television and movies. I totally enjoyed the sneak peek, and it really drove home the point that there is just. so. much. to. see. I did manage to track down Prince’s brocade jacket, some hand-written lyrics by John Coltrane, a neon sign from the set of Soul Train, and Chuck Berry’s guitar, among other unbelievably amazing finds.

Afterward, we retreated to one very long table set on the terrace, with sweeping D.C. views, for our first course of candied yam veloute, black truffle, toasted pepitas and parmesan foam. Onwuachi, whose restaurant will focus on modern American cuisine, relished the opportunity to look back at African American history and culture via fork and plate. Re that first course, he said “I told myself, ‘I can do this and not make you know you are eating candied yams.’” He was right: the velvety, slightly root vegetables were offset by crunchy pumpkin seeds, and the foam added a salty tang. Judging from the murmurings around the table, more than one of us craved a much larger portion of the amuse bouche-sized dish. Alongside, the 2006 Dom Perignon cut through the richness with lemon custard and brioche notes.

Next up was the chef’s play on gumbo. In Onwuachi's hands, the Creole staple took the form of a bowl of new shell lobster, king crab, Osetra caviar and a play on the culinary “trinity” of celery, onion and bell pepper, which was all accompanied by a small stoneware jug of a pour-your-own crustacean broth. He told us he was going for that warm/cold combo of broth and shellfish, and also liked the texture of the caviar and how it “pops” in your mouth. I was partial to the umami-rich, uber flavorful consomme-style briny broth. The 2004 Dom Perignon Vintage Rose Champagne’s tannic structure was beefy enough, but the wine also had the elegance needed for shellfish. I chatted with Dom Perignon's USA brand director Richard Beaumont about the unmatchable food pairing ability of bubbles; this wine had so much going for it that it could easily be served with steak, or lamb, or veal, or duck.

The final savory course, Wagyu mojo, has Caribbean roots. A beef short rib was served with a mojo aigre douce, red bean sofrito and a habanero sauce whose seeds were removed, letting us taste the pepper’s flavor without the heat--the effect was bright and fresh. And while the 1998 P2 Vintage went just swimmingly with the dish, I was a little bit sorry that I hadn’t saved some of that grippy 2004 rosé.

For dessert, sweet met earthy, as beet butter cake (the very first red velvet cake, according to Onwuachi, as the intensely-hued vegetable had long been used to impart a purplish-red hue before commercially made dyes were available) was plated along with cream cheese sabayon, sorrel and chocolate malt snow. The latter had the freeze-dried texture of that astronaut ice cream you can get just up the street at the Air & Space Museum gift shop--in a good way--and lent a fun crunchy texture. The mmmms and ahhhhs had something to do with the dish, but maybe more so with the wine pairing: a just-released vintage 1995 P2 vintage rosé. Stunning, gorgeous, matured yet still very vibrant, I was super sad when my glass was empty. And all these wines, as is the trend with Champagne, were served in large wine glasses, not flutes. During a trip to the region a few years ago, producer after producer told me that it’s a serious wine that demands a serious glass, and the flute, festive as it may be, has a narrow opening that just doesn’t allow aromas and flavors to fully develop.

Onwuachi wrapped things up with a plug to visit his restaurant, whose tables are booked and paid for in advance a la his website, negating the need for a bill the night you dine to better “make you feel like you are in his home.” We ended the night with an elevator ride down to the first floor, where the Contemplative Court’s water features and uplifting quotes from Martin Luther King, Jr. and Sam Cooke are designed to soothe guests overcome with emotion. It was a low-key, fitting end to a toast-worthy evening in a place that’s been years in the making.