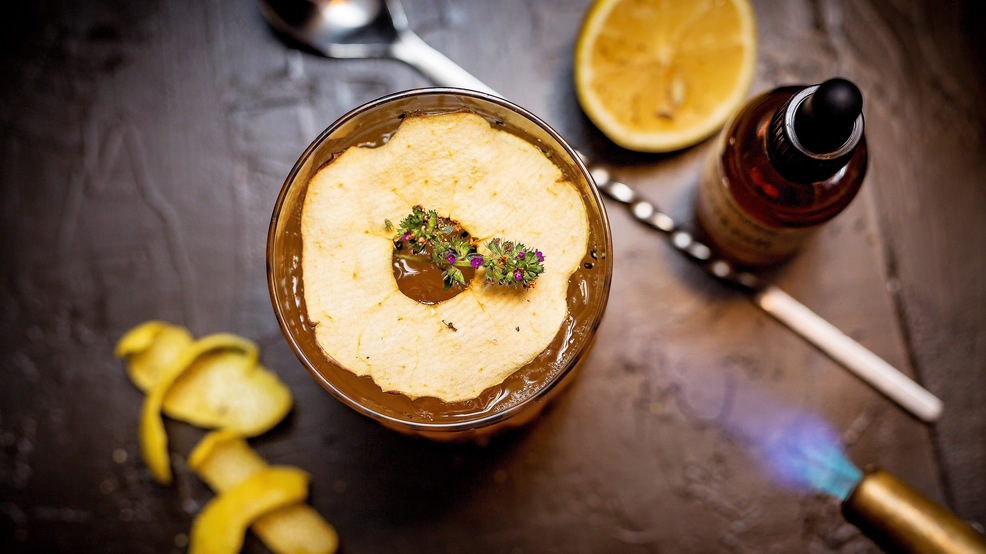 The "zero waste" mentality at Equinox doesn't only apply to food. Drinks such as this Smokey Apple-Rosemary Cider incorporate citrus peels that would otherwise have ended up in the trash. (Image: Courtesy Equinox)
SEE MORE

D.C. recently made national headlines by becoming the second city in the States to ban plastic drinking straws. But after 20 years in business, restaurateurs Ellen Kassoff Gray and Todd Gray of Equinox know the ban is just the tip of the melting iceberg. The couple will host their first public “zero waste” dinner Feb. 18, featuring “upcycled” produce in such dishes as carrot-peel soup, a canapé that incorporates strawberry-hull pesto and a cobbler using sweet potato and apple trimmings for dessert.

She says becoming more sustainable and more conscious of food waste came about organically, so to speak, during their two decades in the restaurant industry.

“I think the older you get in life, you become more mature and introspective, and you think more about your impacts on people, the planet, animals, whatever it is,” she says of their push to become more eco-friendly and sustainable.

For Equinox, forging a new path has been part of the fabric of the restaurant from the beginning, so this next chapter should be a piece of cake.

"They all thought we were crazy back in 1999 when we said we were going to buy directly from farmers," Kassoff Gray laughs.

To take their goals to the next level, the Grays hired D.C.-based (r)evolve to evaluate the restaurant’s waste patterns and submit a detailed report on how Equinox can become a zero-waste restaurant. Kassoff Gray describes how the (r)evolve team took to the alley in gas masks and hazmat suits to sort through the restaurant’s trash. As an avid gardener and composter at home, Kassoff Gray is most excited about implementing some of those skills on a grander scale in the commercial kitchen by “utilizing scrap-to-stem—product that would normally get tossed in the trash.”

She anticipates the most challenging aspect will be getting staff on board with careful separation of food scraps and recyclables even when they’re in the weeds.

“We’re a very small restaurant, and we don’t have a lot of room for separate bins,” she says, worrying that busy times might result in carelessness. “We have to implement mindful disposal—and then I’ll make them do five down dogs after that,” jokes the restaurateur, who regularly brings her own take-out containers to the restaurants she frequents.

The couple's goal is to find ways to help smaller restaurants go green without cutting too far into the bottom line.

“I would love to get a more serious conversation going in D.C. if restaurants are interested in going green,” Kassoff Gray says, adding that she’d also like to launch a D.C.-based green certification.

In the meantime, the restaurant will continue to find ways to make kitchen scraps worthy of the fine-dining vibe while working to reduce its carbon footprint any way it can, even if it means installing a glass-enclosed earthworm garden in the basement to work their digestive magic on the compost.

“It’s going to cost more in the short term, for sure, but it’s something we’re committed to,” she says of making Equinox more earth-friendly. “We’re trying to find a model to balance out the economics and hopefully help other restaurants.”

The Not Wasted Dinner at Equinox Restaurant takes place Feb. 18 at 7 p.m. and costs $65 per person for three courses plus a welcome cocktail and canape. Tickets can be purchased here, and more dinners are planned for future dates.