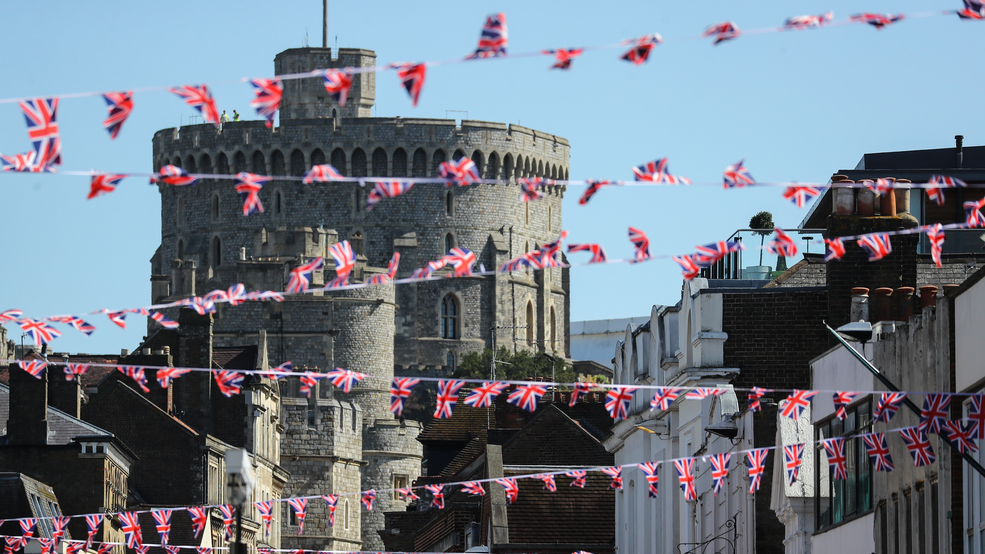 Outside of Windsor, the streets are adorned with flags and bunting and even the roads have had a new layer of tarmac and freshly painted lines, ahead of the Royal Wedding. (Image: John Rainford/WENN.com)
SEE MORE

No Invitation? No Worries! 5 places to celebrate the Royal Wedding in D.C.

If your invitation to Saturday's Royal Wedding extravaganza got "lost in the mail," don't fret -- D.C. is celebrating the exciting event in a big way. Here are five places in the District to watch the wedding while experiencing the royal treatment, with many hotels serving British food and imaginative cocktails reflecting the happy couple.

The Ritz -Carlton D.C.
The Ritz -Carlton, D.C knows how to throw a Royal Wedding viewing party. After all, they did it in 2011 for Prince William and Kate Middleton. All you’ll have to do is wake up early. The festivities ($75/person) start at 6 a.m., with viewing beginning at 7 a.m., in the Grand Ballroom, which is being transformed into its very own Windsor Castle where you’ll watch as Prince Harry marries Miss Meghan Markle in real time. There will be prizes for guests wearing the ascot, fascinator or bonnet that best exudes the classic British style of the Royal Family. The event is completely customized to fit the unique personality of both the Prince and Meghan Markle, from the décor down to the food. Partygoers will enjoy a decadent breakfast with a modern take on British fare, such as freshly baked scones and crumpets, bangers and traditional British gammon, omelets and more. Cocktails will be created by Joseph A. Magnus & Co. and include:

The Fairmont, D.C.
The Fairmont’s Royal Garden Party runs from 10 a.m. to noon, where the final of The FA Cup (known officially as The Football Association Challenge Cup), will be broadcast on large screens. And who doesn’t love taking pics at a wedding? Pose with Royal cutouts inside antique and new Jaguars and Range Rovers. There will also be Royal Bridal attire and Royal-looking jewelry. Sip specially priced Pimm’s Cups, British beer, sparkling wine and rosé ($12), while you taste English Garden Fare and wedding cake. The event is free to attend, but a reservation on Eventbrite is required, and you need to bring your ticket to the party.

Mandarin Oriental, Washington, D.C.
Mandarin Oriental is requesting the pleasure of your company at 7 a.m. for a special Royal Wedding Tea and Viewing Party ($58/adult, $27/child) in celebration of the marriage of Prince Henry of Wales and Ms. Meghan Markle. Yes, don your fascinator or top hat and enjoy a morning of British traditions while watching the live televised coverage of the ceremony in the Empress Lounge. Union Jacks and Old Glory will fly from the hotel and adorn the Empress Lounge creating an atmosphere of celebration for the unity of the couple and the countries. The Royal Tea includes specially selected teas, delicate finger sandwiches, traditional teacakes, scones, a variety of preserves and sweets. When the bells at St. George’s Chapel at Windsor Castle ring to signal the couple’s union, guests will raise a glass of sparkling wine to toast the newlyweds. Guests will receive a traditional English wedding favor to enjoy at home. Reservations are required.

Four Seasons Hotel, Washington, D.C.
The Four Seasons will live stream the Royal Wedding in SEASONS Restaurant at 7 a.m. For this special occasion, Executive Chef Andrew Court -- originally from Birmingham, England -- has created a custom menu that includes London Bridges, a traditional English breakfast with two eggs any style, baked beans, sausage, Canadian bacon, Portobello mushroom and grilled tomato ($29). He will also offer a soft boiled egg with toast “soldier,” grilled asparagus and Virginia ham for $14 or tea service with traditional scones, clotted cream and housemade jam ($14). A “Marry Harry” cocktail ($20) was created by the hotel’s mixologist, as it's believed that Markle is a fan of scotch and Prince Philip loves Bowmore 15 year. It's a twist on a classic Penicillin cocktail, with St. Germain Elderflower liqueur and Rhubarb shrub to create bright and floral notes, to balance the cocktail, while integrating the flavors of the lemon Elderflower cake, rumored to be served at the Royal wedding. Reservations are recommended.

Royal Wedding PUB
If you're looking for a place to watch the royal festivities from a throne while petting a corgi and sipping a Markle Sparkle or Put a Ring On It, the Royal Wedding PUB is the place for you! Ok, so the corgi is stuffed, but the drinks are YUM-MY and the decor is fit for a princess. The overall aesthetic is inspired by the interior of the couple's wedding venue, St. George's Chapel at Windsor Castle, with hand-carved replicas of the church's vaulted ceilings and Gothic columns. Faux stained glass windows and heraldic standards (flags) will pay homage to past and present members of the Order of the Garter. Plus, you'll be drinking for a cause as 100 percent of bar proceeds that day will benefit The Invictus Games Foundation -- an international sporting event for wounded, injured and sick servicemen and women -- for which Prince Harry is a patron.