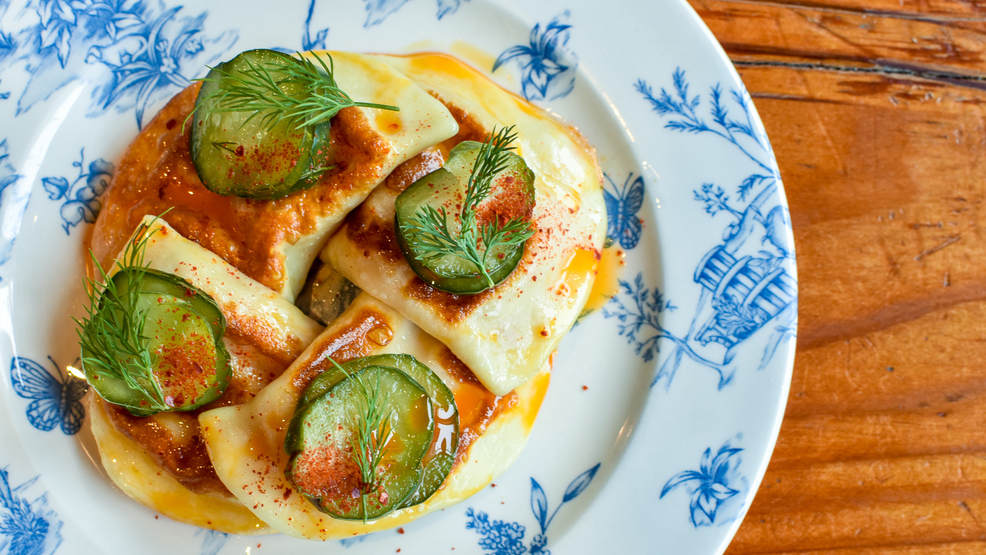 As the name implies, creative preservation techniques abound – from pickles and preserves to krauts and kimchi – adding flairs and flourishes to the creative mid-Atlantic fare. (Image: Landon Paddock)
SEE MORE

Summer is stretching out before us. It’s the perfect season to take a day trip out to Maryland or Virginia for a food-focused excursion. Here are six restaurants worth the drive – and what to do while you’re out there.

With only 16 seats in the dining room – a low-slung neo-colonial affair with thick beams and a wrought iron candelabra overhead and polished hardwood underfoot – there’s an innate intimacy to this Sperryville stunner. Chef John MacPherson and his wife, general manager Diane MacPherson, preside over meals powered by the season with many ingredients coming from regional farmers, foragers, and fishermen.

While you’re there: Stop at Wild Roots Apothecary to pick up some of their botanically boosted skincare products and sprays. Don’t overlook their syrups and bitters, which are designed to ensure your cocktail’s wellbeing rather than your own.

The winsomely creative farm-to-table venture perched on a busy thoroughfare in Annapolis’ downtown area is run by husband and wife powerhouse chef Jeremy and Michelle Hoffman. She handles the front of the house; he handles the kitchen. As the name implies, creative preservation techniques abound – from pickles and preserves to krauts and kimchi – adding flairs and flourishes to the creative mid-Atlantic fare.

While you’re there: Stop at the Banneker-Douglass Museum to delve into Maryland’s African American heritage and history. Listen to one of Frederick Douglass’ speeches against slavery, explore the roots of the state’s first African American settler, and get a look at a reward poster for abolitionist Harriet Tubman.

The Restaurant at Patowmack Farm

While you’re there: Go on a micro vineyard tour with stops at Creek’s Edge Winery and Hiddencroft Vineyard.

Enjoy a taste of France at the heart of the Shenandoah Valley. Choose between a three- or five-course tasting menu rich with the flavors of the season. There are over 1,000 selections on the wine list, so the designated passenger will have plenty to enjoy.

While you’re there: Watch colonial life in action at the Burwell-Morgan Mill, an 18th century grist mill that still churns out freshly ground flour, cornmeal, and grits. Then step across the road to the charming Locke Store, a modern-minded country store, where you can score some nibbles to take home.

Newly installed executive chef Jan Van Haute, who used to be the chef for the Ambassador of Belgium to the United States, is adding Belgian influence to the elegant French-focused restaurant in Middleburg. Its glass ceilings gives you the sensation you’re dining in a most elegant greenhouse, while the produce, herbs, and eggs harvested from the 265-acre property serve as a stirring reminder of the season.

While you’re there: Make an appointment for a treatment (or two) at Salamander’s 23,000-square-foot-spa, offering massages, wraps, and facials. Gents who are looking for some extra pampering can get a haircut or a mani-pedi.

The Inn at Little Washington

Chef-owner Patrick O’Connell’s outsized personality, enduring commitment to hospitality and prodigious talent drive this charmingly appointed, Michelin three-star gourmet getaway in the Virginian greenbelt. Immerse yourself in the beyond-luxurious meal at one of the two kitchen tables set in the middle of the action.

While you’re there: Descend into Luray Caverns – an unbelievable underworld filled with towering stalagmites, an organ that harnesses the rock formations to produce ethereal tones, and a crystal clear pool perfectly reflecting the stalactites jutting down, creating a stunning optical illusion – or ascend to Skyline Drive in Shenandoah National Park for an eagle’s eye view of the lush valley below.