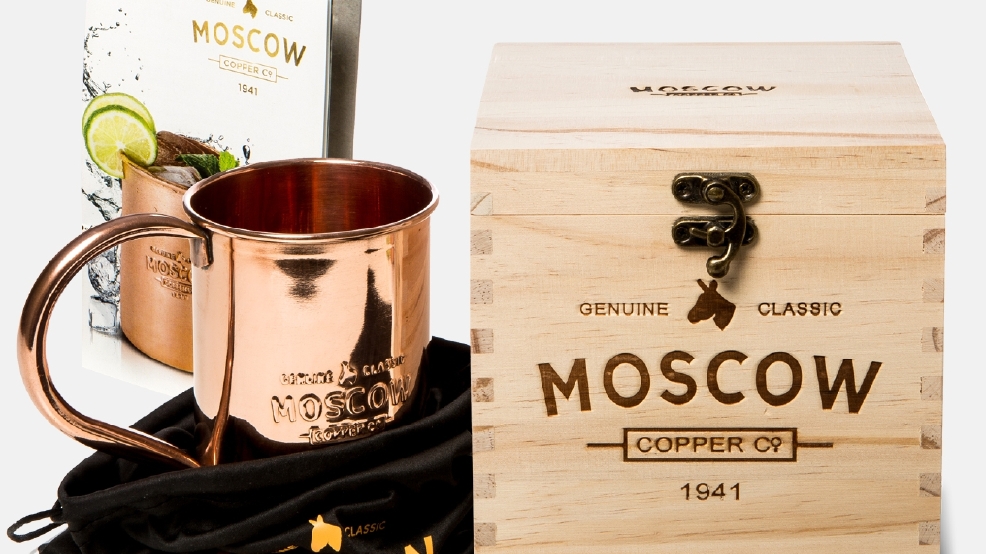 It’s a drink that’s been known to spur otherwise law-abiding guests into absconding with the glassware -- an icy, spicy concoction that mixes up quickly and goes down even more easily. Of course, we’re talking about the Moscow Mule, which is celebrating its 75th anniversary this year. (Image: Courtesy Moscow Copper Co)
SEE MORE

It’s a drink that’s been known to spur otherwise law-abiding guests into absconding with the glassware -- an icy, spicy concoction that mixes up quickly and goes down even more easily. Of course, we’re talking about the Moscow Mule, which is celebrating its 75th anniversary this year. But vodka-and-ginger-beer fans, do you know how the cocktail came about?

It was actually 1941, when Sophie Berezinski, a Russian immigrant, brought with her 2,000 copper mugs from her father’s factory, the Moscow Copper Co. Unfortunately, neither she nor her husband Max could unload the mugs around Los Angeles, so one day, tired, disillusioned and disappointed, she found herself at the famous Cock ‘n’ Bull Pub on the Sunset Strip; it turned out to be perfect timing. She met John Martin, who had recently purchased the Smirnoff Vodka distillery, and Jack Morgan, the owner of the Cock ‘n’ Bull, who was busy trying to hawk his brand of ginger beer. The trio worked to create a cocktail that would combine all three, and the Moscow Mule--with its blend of vodka, ginger beer, simple syrup and lime juice over ice--was born.

J.J. Resnick recently relaunched the Moscow Copper Co., making beautifully crafted copper mugs from Sophie’s standards and original molds. I caught up with Resnick recently at Tales of the Cocktail in New Orleans, where I procured my own mug--and promptly filled it with a Moscow Mule at the bar, of course. We talked about what a proper mug adds to the experience--both aesthetically and scientifically. “It is a scientific fact that a chemical reaction takes place when the vodka and ginger beer hit the surface of the copper, which magnifies the carbonation and showcases the clear spirit,” he explains. Maybe just as important, a Moscow Mule looks gorgeous, and lets you drink in a little history. “When served in the Original Moscow Copper Co. mug, you can taste the difference, and you’re reminded of a true American Dream story that took place back in 1941.”

Here are some spots around town mixing up some tasty riffs on the Moscow Mule:

The Moscow Mule variant at the Convention Center area Cuban restaurant was inspired by three “ingredients” ubiquitous to Havana: sun, a feeling of summertime and freshness. Their Mule del Sol ($10) sticks pretty closely to the original--with a few exceptions (and if you are looking to take a break from all of those rum drinks on the menu, it’s a nice little respite.) “Cuba Libre’s addition of cucumber and basil enhances the flavor profile and seasonality of an already refreshing and earthy cocktail,” says director of restaurant operations Chris Perrupato. “[It’s] a light and refreshing drink with a summery twist, transporting guests to a tropical street in Old Havana, no matter what time of year it is in DC.” Viva el vodka! cubalibrerestaurant.com/en/washington

Russia is famous for its vodka, while the Balkans are known for rakia, a brandy distilled from any number of fruits from peaches to apples. For the Belgrade Mule ($9) at the Capitol Hill Balkan small plates den, plum rakia--called Slivovitz--is mixed with freshly squeezed lemon juice and the owner’s recipe for ginger syrup, and topped with soda, for a drink that remains true to its roots yet touts Eastern European flair. “All our classic cocktails are rakia based and that was the best way to present that famous Balkan fruit brandy to consumers on US market,” says manager Uros Jojic. ambarrestaurant.com

Bartender Tihon Nguyen at the 14th Street Asian/Latin fusion hotspot craved something unique and delicious that could still technically be called a mule. The Masa Mule ($10) has the usual suspects (Tito’s Vodka, ginger beer and lime) along with a fruity, herbal shrub made with pineapple and rosemary. “Shrubs are a cool way to add acidity to a drink and the rosemary and pineapple make the cocktail very light and refreshing,” says Nguyen. “It's a perfect drink to have on our rooftop!” Um, yes, please. richardsandoval.com/masa14

Smoke and spice meet ice at the New American restaurant at the Park Hyatt in the city’s West End, via the El Cobre ($15). Instead of vodka, bartender Alex Gordon pours in Mezcal and Tequila. Agave syrup gets kicked up a notch with jalapeno peppers, and a drinking vinegar in the form of a pineapple shrub gives it tang. “I wanted something that would appeal to a bunch of people--something spicy, sweet, smoky, and tart,” says Gordon. “[It’s] very drinkable and goes down smooth!” blueducktavern.com

One teeny tiny tweak to the Moscow Mule, and voila, it starts speaking French. Le Mule ($11) at the New Orleans restaurant near the Convention Center uses pear vodka to subtly complement the ginger and lime flavors of the original. “I’ve always been a big fan of the Moscow Mule,” says wine and beverage director for PassionFood Hospitality. “It’s endured for so long because it’s simple, refreshing and most importantly –always in season.” Mais oui! acadianarestaurant.com

Moonshine is kinda like vodka--after all, it’s clear, unaged and is generally made from grain. An apple pie flavored moonshine from Junior Johnson is the basis for the Mezcal Mula ($10) at the contemporary Mexican kitchen in Arlington. “[It’s] a nod to Fuego’s authentic Mexican flavors, giving the cocktail a rich smoky flavor,” says Clime. “The apple moonshine pairs nicely with the refreshing ginger and lime flavors and helps to balance the smokiness of the mezcal.” fuegova.com

Fill a copper mug with ice. Add vodka and lime juice, then ginger beer and simple syrup; stir to mix. Garnish with the lime wedge.