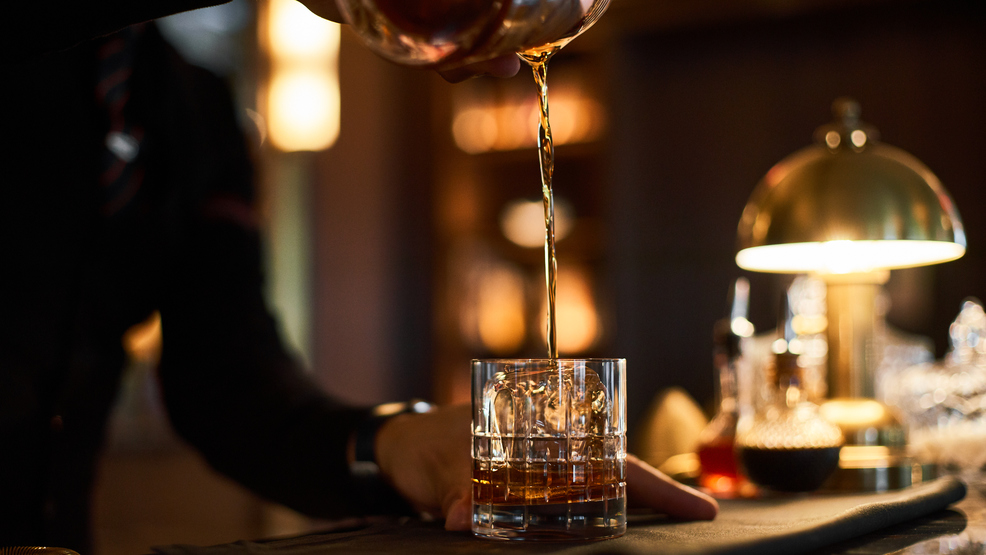 "I always recommend trying whiskey with friends in a place where you have someone to guide you," says Lenikowski. (Image: Courtesy The Dupont Circle Hotel)
SEE MORE

All about Irish whiskey and 5 places to drink it in D.C.

Irish whiskey is hot. As in, the fastest growing spirits category in the world hot. And with good reason.

Its triple-distillation process renders it super smooth -- with few exceptions it’s not peaty or smoky (but if you are into that you can seek out producers like Connemara) and it plays nicely in cocktails.

Don’t even think about ordering a green beer on March 17 when you should be down with brown. Sláinte!

Should you expect to go to a bar named after Ireland’s capital and get a thorough introduction to Irish whiskey? Yes, and co-owner Gavin Coleman is at the ready to do it.

Why Irish whiskey: “Most Irish whiskey is triple distilled – this helps remove some of the intensity that scares people off from drinking whiskey.”
How to approach it: “Start by trying a single pot still whiskey. This is the traditional way whiskey was made in Ireland; its unique flavor profile really differentiates it from other styles. Single Pot Still Whiskey is exceptionally smooth, has a distinct spiciness known as the ‘pot still character’ and a unique mouth-feel which gives the whiskey an almost creamy quality.
What should I drink: There are around 100 Irish whiskeys at The Dubliner priced from $7 to $250; Coleman encourages you to try them all -- not in one night, of course.
Go-to cocktail: “It’s hard to beat a perfectly made Irish Coffee. I prefer using a blended Irish Whiskey that does not overpower the drink. Remember to use brewed coffee, not espresso, like a medium roast to keep the cocktail balanced.”

The parent company for The Dupont Circle Hotel and its sleek lounge The Doyle is headquartered in Ireland, and assistant bar manager Dominik Lenikowski oversees an ever-growing list of brown spirits from the Emerald Isle.

Why Irish whiskey: “The Irish are considered by many as the fathers of whiskey and they are true masters to their craft. My personal love for fine whiskey started with Jameson, [as] I loved how light and pleasant it was. Shortly after I discovered that Bushmills had similar qualities thanks to the same triple-distillation process.”
How to approach it: “I always recommend trying whiskey with friends in a place where you have someone to guide you. For fine spirits I recommend the use of Glencairn glass with a side of room temperature mineral water best from the area where the whiskey comes from. Don’t be hesitant, just go for it.”
What should I drink: Doyle’s has more than 25 different Irish whiskeys priced $12 to $200 and the list is growing.
Go-to cocktail: “Any classic cocktail calling for rye works well for me. I enjoy an Irish Sazerac with sharp St. George Absinthe and excellent Yellow Spot where three different finishes of that amazing whiskey shine in this take on the New Orleans classic.”

General manager Brian Nixon (who also runs Truxton Inn) has seen a bigger push lately for Irish whiskey and likens it to Japanese whiskey--but with a friendlier price tag.

Why Irish whiskey: Japanese whiskey and Irish whiskey “both tend to have soft, subtle flavors which makes them an easy gateway whiskey for beginners.”
How to approach it: “I always recommend beginners talk to their bartender when exploring a new spirit category. Much like going to the doctor, they tend to know more than you do and can make good recommendations.”
What should I drink: McClellan’s has six Irish whiskeys priced from $8-$16 for a 1.5 oz. pour.
Go-to cocktail: “I love the Tipperary [with Slane Irish Whiskey, Cocchi Vermouth di Torino, Green Chartreuse and Angostura Bitters], it’s a Manhattan riff with Chartreuse essentially. Also, the classic Irish Coffee is always a winner -- we've got a version with cold brew and dry cacao syrup."

Ruairi De Burca, the general manager at this Capitol Hill whiskey lounge, hails from County Cork, so he knows a thing or two about the country’s native hooch.

Why Irish whiskey: “The vast majority is triple-distilled giving you a more pure product. The aging is not restricted to oak like Bourbon and Scotch so it is more versatile in its finish.”
How to approach it: “If I had the chance to go back and start over, I would probably go for a higher quality whiskey to begin with. Find one that I really like and use that one as the base for judging others.”
What should I drink: Barrel carries more than 30 priced from $8 to $130 a pour. “If you prefer a whiskey that is 'small batch' you may want to lean toward pot still whiskeys.”
Go-to cocktail: "Coffee is for Closers, a barrel-aged sip with Teeling’s, nitro cold brew, demerara syrup, cream, nutmeg and orange bitters; and The Massey, with Irish whiskey, sweet vermouth, gin, Campari and green Chartreuse."

Head through the back door of this casual chicken and Latin street food resto on 14th Street and you’ll come across a speakeasy stocked with whiskeys from around the globe including Ireland, all overseen by bar manager Julia Reh.

Why Irish whiskey: “What makes Irish whiskey so approachable is its smoothness, [which] is attained through a traditional Irish malting process in addition to a superior water source.”
How to approach it: “With open arms of course. Because of its smooth sweet profile, Irish whiskey is a great way to transition into drinking whiskey in general.”
What should I drink: Chicken + Whiskey carries six priced $9-$17, including Connemara Peated Single Malt ($17), The Dubliner Bourbon Cask Finish ($9) and Glendalough 7 Year Porter Cask Finish ($14).
Go-to cocktail: “While we normally suggest you drink your Irish whiskey on the rocks, it also tastes fantastic in an Old Fashioned [with simple syrup, Angostura bitters and orange peel] or a Gold Rush [with lemon juice, honey syrup and lemon peel].