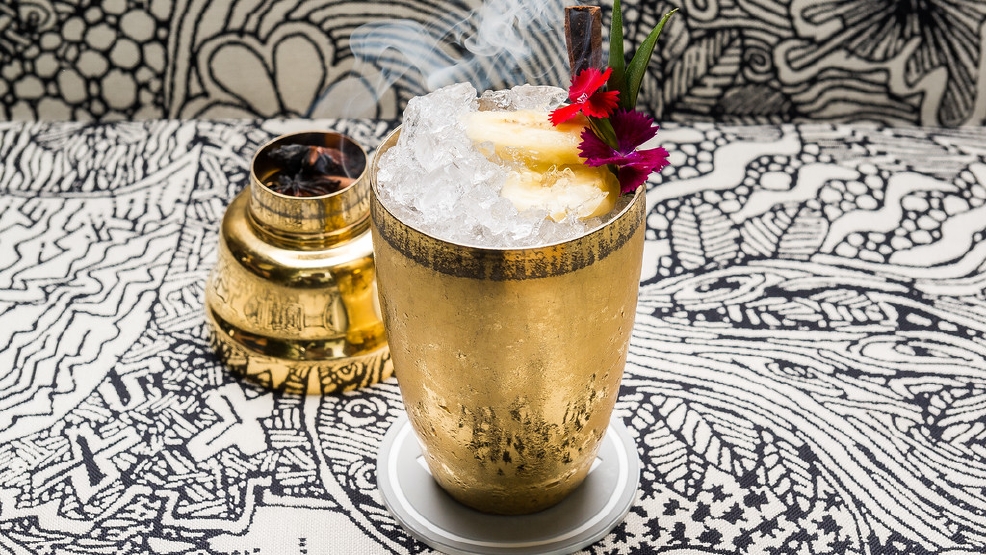 Headed to a D.C. Michelin-starred restaurant? Drink these cocktails!

While drinks may not technically be part of the critique when those undercover Michelin judges are considering bestowing those coveted stars, we can all agree that great cocktails make every dining experience better. Here are some of the top tipples at D.C. Michelin restaurants:

Restaurant: Inn at Little Washington
Number of Michelin Stars: 2
The Cocktail: Patrick’s Punch
Clarified Milk Punch--made by taking advantage of the fact that dairy curdles and can be strained out when citrus is added to it--dates back 300 years. Not only it is a conversation starter, it offers up a luxurious mouth feel while at the same time remaining ethereal and light on the palate. This riff from the Washington, Virginia inn and restaurant named as an ode to the chef at the helm highlights spiced rum and local Shenandoah apples. It’s perfect with a sweet ending last course--or as liquid dessert in its own right.

Restaurant: minibar
Number of Michelin Stars: Two
The Cocktail: Lady with the Tutti Frutti Hat (available at barmini)
Okay, so technically barmini didn’t get the Michelin nod, but guests partaking in the inventive molecular gastronomy at José Andrés’ minibar next door would be wise to start (or end) the evening at the equally creative barmini. Served in a smoking shaker, this cocktail is crafted with Bourbon infused with bananas, cloves, brown sugar and cinnamon, then mixed with Cognac, lemon, guanabana, pineapple, cinnamon and vanilla, garnished with a pineapple leaf, viola, strawberry, blackberry, kumquat and banana.

Restaurant: Pineapple & Pearls
Number of Michelin Stars: 2
The Cocktail: Genever
Before heading to your table at Aaron Silverman’s Capitol Hill prix fixe sibling to Rose’s Luxury to indulge in thirteen or so inventive courses, linger at the bar and sip one of beverage director Jeff Faile’s memorable cocktails. He wanted to incorporate late summer and fall flavors into one drink., and weighty barrel-aged genever and allspice liqueur definitely fit the bill, while a plum shrub adds a sweet note and acidity, and vanilla syrup rounds everything out.

Restaurant: Masseria
Number of Michelin Stars: 1
The Cocktail: I’m the King of Brooklyn...For All She Knows
Bar manager Julien-Pierre Bourgon’s Tequila tipple is named for a lyric from the Indie band Shakey Graves’ song “Built to Roam.” Crimson Crisp Apples are sliced paper-thin, mixed with finely diced floral and fragrant Escamillo peppers and vacuum-sealed in a chamber bag with water and a pinch of sugar. The mixture is strained and stirred with lemon, Peligroso Tequila and clove-infused olive oil, and garnished with additional beads of oil. “The olive oil works well with Masseria's Italian cuisine and it has a really beautiful aesthetic the way it breaks into pearls at the drink's surface,” says Bourgon. “On the lips, it adds a nice smoothness with a slight clove finish.”

The Restaurant: Plume
Number of Michelin Stars: 1
The Cocktail: The Monticello’s Garden Vesper
The upscale restaurant at the city’s Jefferson Hotel’s take on the classic Vesper--traditionally made with gin, vodka and Lillet Blanc--also happens to be named for Thomas Jefferson’s Renaissance-designed Charlottesville estate. Swan’s Neck Vodka--made in France from grapes--is stirred with Art in the Age Sage Liqueur, Gi Vergano Luli Moscato Chinato (a vermouth-like apertif from Italy) and Bonal Gentiane Quina, a French aperitif that’s been around since 1865, garnished with fresh herbs. Fragrant and heady, the drink is at once herbal, fresh and complex.

Restaurant: The Dabney
Number of Michelin Stars: One
The Cocktail: Vest Season
If you are a hoptail fan, head to this Mid-Atlantic-focused Shaw restaurant overseen by chef Jeremiah Langhorne. It starts with Hamilton Jamaica Rum, which is mixed with Zirbenz Stone Pine Liqueur from the Alps, a housemade ginger cordial, hearth bitters and honey, topped with Three Notch-d Ghost of the 43rd Pale Ale, brewed in Charlottesville.