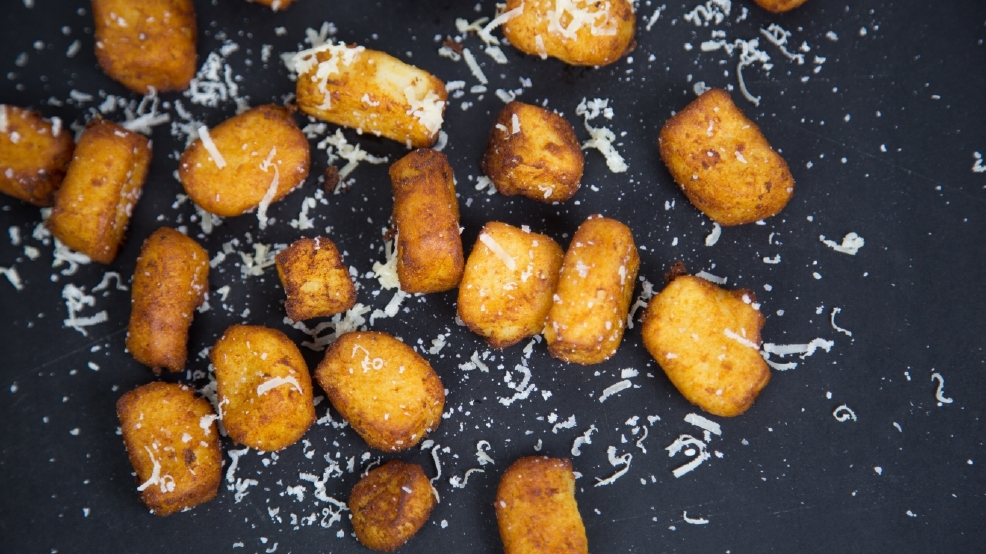 How a 200-mile walk without food inspired mouth-watering burgers

Mathew Ramsey has always been the creative type. "It started out as poetry, turned into photography/painting/filmmaking and, finally, food," he says. "I'm pretty sure food is my last stop." Ramsey is the author of the edgy cookbook, PORNBURGER: Hot Buns and Juicy Beefcakes, debuting May 17. The District denizen has no doubt found his calling in food and his home in Washington -- but how did he get there?

After a nomadic childhood that took him everywhere from Detroit to Tokyo thanks to his dad's job, he enrolled in George Washington University. "Back then. my perspective of D.C. was Foggy Bottom and Georgetown -- I moved to New York the day after I graduated, because I wanted more," he admits.

It was a National Geographic gig that brought him back. He got his foot in the door as Lisa Ling's personal assistant. "My first assignment was sending a bathing suit to her at some location she was shooting at," Ramsey says. He worked his way up to being a producer, honing his photography skills along the way, which would come in handy in shooting his cookbook. But, he knew he had to put National Geographic in the rearview mirror after a major feat.

Ramsey and nine friends completed a 200-mile walk along the C & O canal without food or camping equipment to support war-torn Southern Sudan in 2006. "We were raising money to put in medical facilities out there," he explains. "We were inspired by one of the 'lost boys' who was an example of the sheer triumph of human will." They called the ten-day walk, "the slog," and raised $25,000.

"All I could think about was food," he says. "After day two, your physical pain subsides and the mind goes into overdrive. I could smell a granola bar coming from 30 feet away." He calls it catalytic. "The whole time I was on the trail, I would write down recipes and I was thinking about food conceptsthis was a part of me I wanted to explore." He quit his job and at age 27 and moved to San Francisco for culinary school.

After graduating, Ramsey returned to D.C. yet again, this time to work at Living Social. Soon after, in January 2014, he launched the blog, Pornburger.me. The name is symbolic of Ramsey's fascination with food's link to sensuality. "I'm a glutton through and through. I do find food very sensual, and if there's something that entices me, I want it all the way. So it just seemed like a natural fit." The blog is a collection of fantasy burgers.

The success of the site lead Mathew to start cracking on a cookbook that shows off his mouth-watering "stacks" named with clever puns like the "Inglorious Basquered," which was inspired by a trip to San Sebastian in Spain's Basque country. "I was so blown away by the food scene there, I was like, I need to put a burger on a stick," he says. The result? A pintxo-style burger with an oxtail patty, seared foie gras, candied jamón, sweet vermouth oxtail jus and physalis shallot compote on country bread.

The 36-year-old cooked all of the burgers and sides featured in the book in his basement apartment in Bloomingdale. "I'm a home chef, so most of these things can be done." Some of the recipes do require some technology, but Ramsey includes some hacks. He expects the book to serve simply as a coffee table read for some, but he hopes others take on the recipesadding that it has a "choose your own adventure" set up where home cooks can mix and match meat blends, sauces, toppings and sides.

Though there were moments when Ramsey almost flipped a table (perfecting his brioche recipe) he's definitely found his calling in food. "It has endless possibilities and speaks to all of the sensesIt's visual, it's tactile, it's taste, it's smell it's the perfect medium for me."

Below, Mathew was kind enough to share one recipe with readers. Be sure to check out the cookbook on May 17.

Stir the cornstarch, All Purpose flour, cheese, salt, Worcestershire powder, and egg, into the riced potatoes. Gently knead until a dough forms and allow to rest for 30 min.

Divide the dough into quarters and roll out, until it's 1 inch thick. Cut each roll into pieces that are "12" as wide. Cook the gnocchi in batches in seasoned boiling water until they float from the bottom to the top, about 40-60 seconds. Place the cooked gnocchi in an ice bath to cool, and then drain on paper towels. Repeat until all gnocchi have been cooked.

When you're ready to serve, heat frying oil to 375 degrees F, and fry them until golden brown. Drain the crispy tots on paper towel and season with salt. Extra portions can be frozen, and fried (right out of the freezer) as needed. Garnish with Parmesan cheese and serve with smoky burger sauce for next level gluttony.