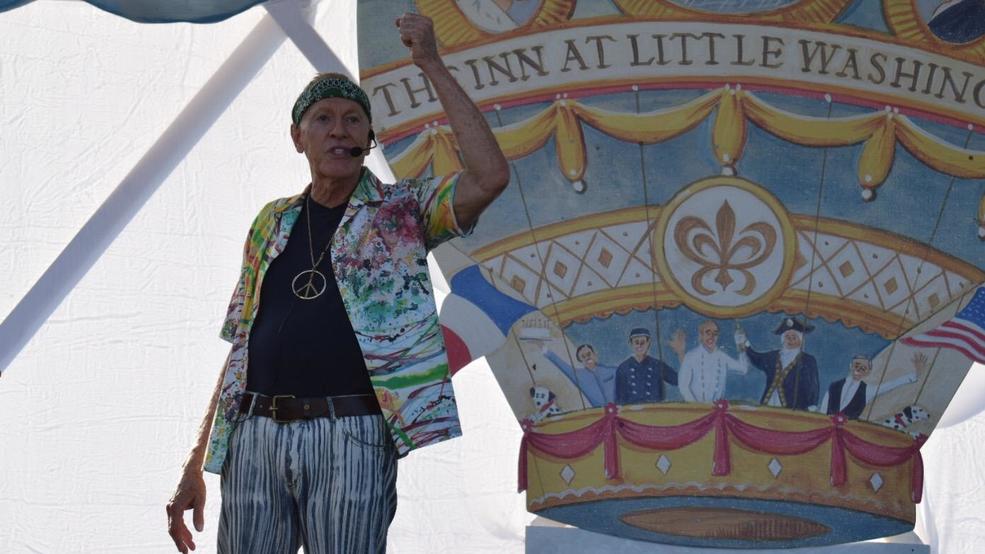 Chefs celebrate 40 years at The Inn at Little Washington

When Executive Chef Patrick O'Connell dreamed of hosting a backyard barbecue to celebrate the 40th anniversary of The Inn at Little Washington, he channeled one of America's most epic music festivals, Woodstock. His version, which took place on Sunday, was called Innstock and was just as legendary.

The event brought a crowd of chefs, patrons, staff and friends of the Inn, and for the most part attendees got down and groovy with the 1969 theme. Many dressed in hippy gear and came armed with festival blankets and lawn chairs for a walk down memory lane.

While there has been much to celebrate, including a recent two-star Michelin win, the party was also meant to celebrate the future, O'Connell said.

"While the theme for the anniversary is 'the first 40 years,' we are constantly evolving, refining and expanding, so the theme speaks to looking ahead, not just looking back," he said.

Sunday's party brought past, present and likely some future greats together in rural Rappahannock County. More than two dozen alumni chef from the Inn cooked small-bite samples. The chef group included some prominent names with D.C. ties: Austin Fausett (Fisk and Co. in Chicago and previously with Proof and Trummer's on Main), Tarver King ( with The Restaurant at Patowmack Farm) and Stephen Lyons (Clyde's Restaurant Group). Friends of the Inn were also on hand to celebrate, including ThinkFoodGroup's José Andrés and Chaplin's Ari Wilder.

Continuing with the festival vibe, there was roving entertainment, including celebrity impersonator acts of the likes of Janis Joplin, Elton John and Jimi Hendrix, as well as hot air balloon rides and live bluegrass music. The night culminated with a barbecue and fried chicken spread, and a fireworks show, which lit up the night.

For those who missed the 40th anniversary party, fear not. Smaller village-wide parties happen every Saturday at the Inn's farmers market, which run until October 27, and includes cooking demos, farm-fresh produce, sausages, breads, pastries, barbecue and special treats from The Inn’s kitchen.