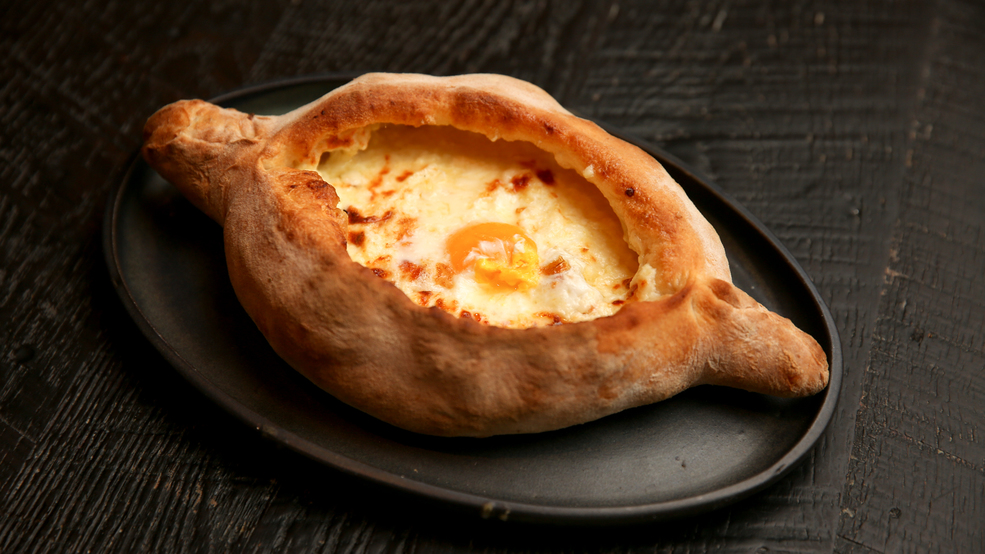 Khachapuri is life changing. And that’s not hyperbole. Once you’ve discovered the irresistible combination of crusty dough, ooey gooey cheese, melted butter and a velvety egg yolk that ties it all together, there’s no going back. (Image: Amanda Andrade-Rhoades/ DC Refined)
SEE MORE

Learn how to make khachapuri, the Georgian cheesy bread of your dreams

Khachapuri is life changing. And that’s not hyperbole. Once you’ve discovered the irresistible combination of crusty dough, ooey gooey cheese, melted butter and a velvety egg yolk that ties it all together, there’s no going back.

The dish is a Georgian staple, enjoyed at all times of the day and night as breakfast, an appetizer, main course or late night snack. And as a hangover cure after imbibing too much of the grappa-like Georgian brandy called chacha -- unbeatable.

I first tried khachapuri last year at Compass Rose after seeing countless friends’ IG posts. It really is the veritable definition of #foodporn. More recently, I dined at Supra, the D.C. restaurant whose very name translates to “Georgian feast.” Executive chef Malkhaz Maisashvili told me his staff sells upwards of 60 of the signature version of khachapuri on a weekend night, and about 90 percent of tables order one of the six iterations; not sure what’s wrong with the other 10 percent, but they don't know what they are missing! Supra dedicates an entire section of its menu to khachapuri, including pkhlovani (spinach, cheese and herbs), lobiani (white bean) and kubdari (spicy pork and beef). But the most popular is ajaruli, the aforementioned boat-shaped bread stuffed with three kinds of cheeses and topped with an egg yolk and butter. It’s named for a region in the western part of the country, and is believed to be shaped that way because of the fishing industry -- it’s meant to resemble a boat out in the sun, hence the egg yolk.

Riffing on a “make your own pizza party” dinner club idea (no disrespect meant, and I wouldn’t dare compare the two dishes), I asked Malkhaz for a little lesson in how to make ajaruli khachapuri. Baking bread can surely be daunting for the home chef, but khachapuri is actually pretty manageable, as the dough only has to rise once and baking time is super short. And Malkhaz is the perfect chef to show you how to do it. A Georgian native, he has been preparing his native cuisine since he was 16, when he began working as a prep station intern at Hotel Iveria in Tbilisi. Later, he became executive chef at the acclaimed Restaurant Nikala in Sighnaghi.

If you are getting a group of friends together to make khachapuri for dinner, you can easily round out the meal with a nice salad and some bottles of Georgian wine, like stone fruit and mineral-driven rkatsiteli, or otskhanuri sapere, which could easily stand in for a fruity pinot noir. Each khachapuri can serve about two people, though believe me when I say it’s highly addictive and I could have easily polished off an entire one myself when I sampled it. Better to make extras, which can be easily reheated in an oven.