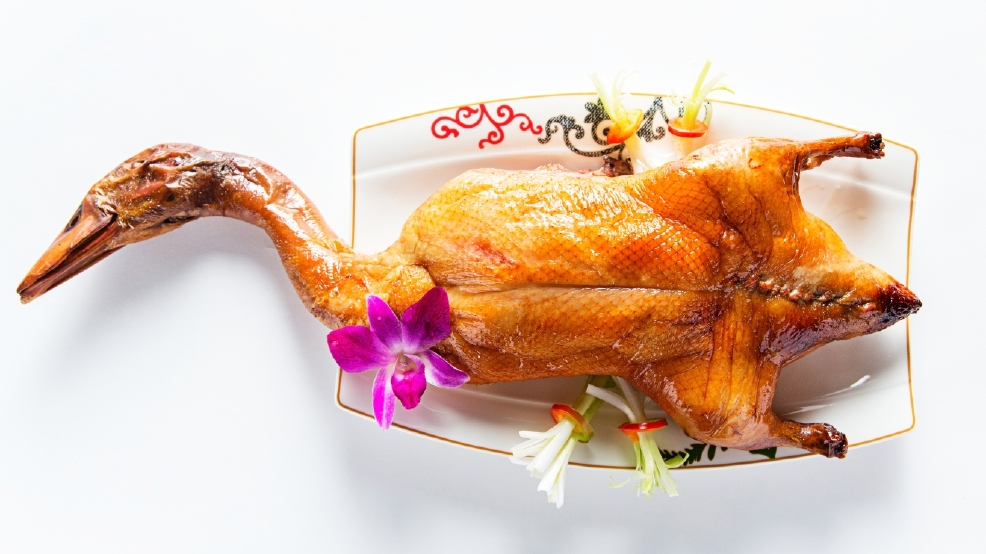 Love duck? You're in luck! Order it at these 3 D.C. restaurants

Succulent, rich and juicy, whole duck is one of those daunting dishes that home cooks are the least likely to tackle themselves. The marinating! The drying! Perfecting that crisp skin! No worries--these top toques are doing it all for you. So keep that oven turned off, grab a few canard-eating compatriots and head to one of these spots where bird is the word.

How to Get It: It’s available seven nights a week open to close, with no advance ordering required.

The Details: Chef Rob Rubba sources ducks from D’Artagnan’s small farm in New York state; Rohan is an exclusive hybrid of heritage breeds from the purveyor. For this poultry smorgasboard, the breast is dry-aged and roasted, the wings are tempura-battered and fried, the thigh is confit, and the rich duck fat is used for a dressing for local spicy greens. “You really get the chance to experience a number of fun, unique and delicious preparations of the same bird,” notes general manager Christopher Metts.” And not a fan of wasting anything, Rubba uses the entire bird in the process, including rendering the fat and using the bones for stock.

Beverage Pairing: The fun and fizzy 2015 Old Westminster Pét-Nat Albariño, a semi-sparkling wine from Maryland made with the Spanish varietal, which has palate-scrubbing properties for the rich and fatty duck. Learn more about Pet-Nat wines here.

Chef Musings: “The duck is pretty symbolic to my career,” declares Rubba. “[It] inspired me to become a chef and has been the centerpiece of many meals with orphaned cooks and chefs during the holidays.” He recalls the fall of 2002, when he had just finished working as a pastry assistant during a summer break from college, where he was an art major. Living with his chef uncle at his New England home, he would spend free time perusing his vast cookbook collection, eventually discovering a duck recipe in Charlie Trotter’s cookbook Meat. Immediately fascinated with the process of butchering and preparing a whole duck, Rubba went to the local butcher to buy one to cook for his uncle and his family, admittedly being taken aback with sticker shock and committing to being careful with the bird. He sourced a butcher’s guide from his uncle’s library, and armed only with a little experience filleting fish and shucking oysters and clams, set out to break down the duck. “Just as I was about to make my first incision, my uncle walked in shouting in a mixed militant and humorous fashion, ‘What the hell are you doing junior?’ He then told me to clean everything up and he would show me how to properly butcher the duck the following day.” He did, and the duo made soup with the bones, confit with the legs, and seared the breast. His uncle also pulled out hoisin and duck sauces from the fridge, and Rubba was blown away. He became taken with Peking duck, and the idea of becoming a chef, after that life-changing day.

The Dish: A whole Rohan duck is brined for 24 hours in a housemade Worcestershire sauce and dry-aged for up to two weeks. It’s cooked gradually in an oven all day, slathered with a spiced honey glaze, and finished in the wood-burning oven. The duck is presented to the table, then carved and served with an accompaniment of fermented butternut squash. (Price / Number of Servings: $110 / 2 to 4)

How to Get It: Currently not listed on the menu, the duck is offered upon availability, generally three to five days per week; six to ten ducks can be available on a given evening. Guests can request the duck in advance, but it’s really first come, first served.

The Details: Staff deemed having the namesake bird an essential part of the Park Hyatt restaurant’s culinary program; chef de cuisine Brad Deboy sources Rohan ducks from D’Artagnan’s New York state farm. The crispy duck undergoes a two week process to fully prepare the dish; increasing then decreasing the oven, then finishing the duck in the wood-burning oven, both result in a very juicy bird inside, with crispy skin on the outside. “This is a hybrid of the classic Peking style duck with an American twist developed at Blue Duck Tavern incorporating house made Worcestershire Sauce, spice and rubs along with a unique dry-aging process,” notes general manager Joseph Cerione.

Chef Musings: Deboy is a big fan of anything pickled or fermented (his Instagram handle is, after all, @sauerbrad5000), so fermented butternut squash seemed to be a natural accompaniment to the duck, offsetting the meat and skin richness and adding a seasonal tang to the dish.

How to Get It: It’s offered on the regular menu every day and does not need to be ordered in advance.

The Details: The Asian fusion restaurant at the MGM Grand National Harbor sources its ducks from Long Island. They are first marinated, then hung overnight to dry to assume a crispy skin, before being roasted and prepared to order. “The unique thing about the Peking Roasted Duck is that it is a very popular and recognizable authentic Chinese dish,” general manager Peter Hsieh points out. “It is the most traditional Chinese entrée we offer--[and] it’s unique because it is served in two courses.”

Kelly Magyarics, DWS, is a wine, spirits and lifestyle writer, and wine educator, in the Washington, D.C. area. She can be reached through her website, www.kellymagyarics.com, or on Twitter and Instagram @kmagyarics.