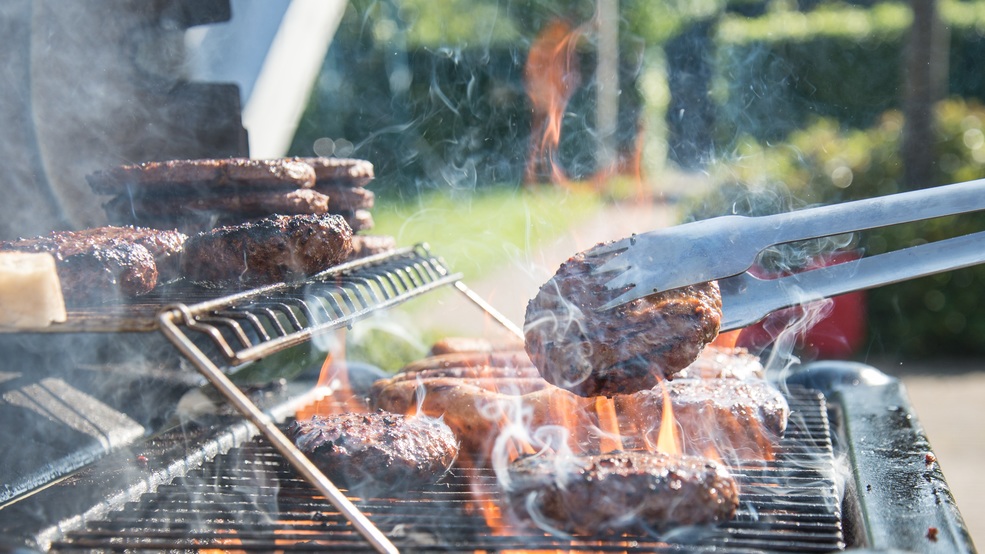 It's an art ensuring the meat gets cooked just right – ever-so-slightly charred and crisscrossed with grill marks, but tender and juicy when you bite into it. (Image: Getty Images)
SEE MORE

How do you create the perfect burger? Making one looks so basic, so easy. Don’t be fooled. It's an art ensuring the meat gets cooked just right – ever-so-slightly charred and crisscrossed with grill marks, but tender and juicy when you bite into it – while all the other components are in harmonious alignment. So we picked the brains of four chefs known for their grill skills – Kyle Bailey, executive chef of the Salt Line; Alex McCoy chef-owner of Lucky Buns; Travis Weiss, executive chef of Rebellion; and Drew Adams, executive chef of Bourbon Steak – who shared their tips, tricks, and techniques to ensure you’re a burger king this Memorial Day weekend.

Spend the time and the money getting the best beef possible. Stachowski’s Market, Red Apron, and Wagshal’s offer superior options, while Whole Foods' and Harris Teeter’s choices are above average.

You’re looking for ground beef with 20 percent fat. “There’s more flavor and it’s less likely to dry out on the grill,” explains Adams.

If the butcher is willing to custom grind a blend for you, McCoy likes the taste and texture achieved by combining short rib, brisket, and either sirloin or ribeye. “If you can get it, aged Black Angus is fantastic,” he adds. “It has a meaty funk to it that’s really good in a burger.”

You don’t need to spend a fortune on a setup. A basic Weber grill or something similar will do the trick nicely. Definitely don’t use gas. “Always cook over hardwood charcoal,” says Bailey. “It has a cleaner, more natural flavor.”

To ignite the hardwood charcoal, nix the lighter fluid, which gives food an unpleasant chemical taste. A chimney starter is helpful. Bailey also recommends handheld bellows to stoke the fire and get the coals glowing red as quickly as possible. After they’re hot, put the dome on the grill and wait for it to hit 400-450 degrees Fahrenheit before you start grilling.

Cooking right on the grate is the traditional way to go. If you want to try a different approach, McCoy recommends cooking patties in a cast-iron pan placed on the grate instead. “That way the meat cooks in its own fat,” he says. “It's going to crisp up that burger and add flavor back into it. Just don’t forget to grease the pan with beef fat, olive oil, or another oil with a high smoke point.”

No matter which surface you cook your burgers on, only use a spatula to flip them. “Never tongs; they just crush the patty,” says Bailey.

Weiss likes to hand form patties weighing about 6-ounces each and about half an inch thick. A patty should be a little wider than the bun it’s going on, so its edges jut out the side. “Dimple the patty in the center,” recommends Bailey, “so when the meat pulls back in as it cooks, it will flatten.”

If you bought good quality beef, all you need to do is season each side with salt and pepper. “You don’t want to mess with the meat too much,” says McCoy. “You add all this stuff and mash it up, you're not making a burger – you’re making meatloaf.”

Make your patties as close to their cooking time as possible. “If you make them too far in advance, the meat will oxidize and discolor, so you’ll end up with a gray burger,” says McCoy. “Also, if you salt meat an hour or two hours beforehand, you’re going to leach out all the juices and they’re going to be dry.”

Right before you cook the hamburgers, spray both sides of the patties with canola or sunflower oil cooking spray. “A lot of people put olive oil on the grill,” says Adams, “but it burns off, leaving a burnt taste, while discoloring the meat.”

According to Weiss, it should only take about eight minutes to cook a quarter pound burger to medium over a 400-450 degree Fahrenheit fire. To start, lift the dome off your grill and place the pre-oiled patty on the cooking grate over the coals. After two minutes, turn the patty 45 degrees to create those classic diamond shaped grill marks. Let the burger cook for two more minutes and then flip it over.

At the six-minute mark, turn it 45 degrees for its final two minutes of cooking. If you’re putting cheese on the burger, do it now and place the dome back on the grill to promote melting. “I’m not a fan of smoked Gouda or an overwhelmingly flavored cheese, like blue,” says McCoy, “because it overwhelms the flavor of the meat. I like Gouda, aged cheddar, or Havarti.”

While the burger is cooking, don’t smash it with your spatula, Weiss recommends. “And don’t move it a lot,” he says. “Meat is a muscle, so the more you play with it the more it will clench up and toughen.”

“Your bread is very important,” says McCoy. “I always go for brioche buns or Martin’s potato rolls, because you want something that’s light and a little sweet.”

When it comes to condiments and toppings, it comes down to personal preference. However, you don’t have to add anything fancy to make a big impression. “You can’t go wrong with flavored potato chips for crunch,” says Bailey.

“Always include something pickled, which will work against the richness of the meat,” adds McCoy.

For Weiss, a quick ‘n’ dirty roasted garlic aioli helps bring the burger together. He suggests buying roasted garlic from a grocery store olive bar, smashing it up, and mixing it with freshly squeezed lemon juice and mayonnaise.