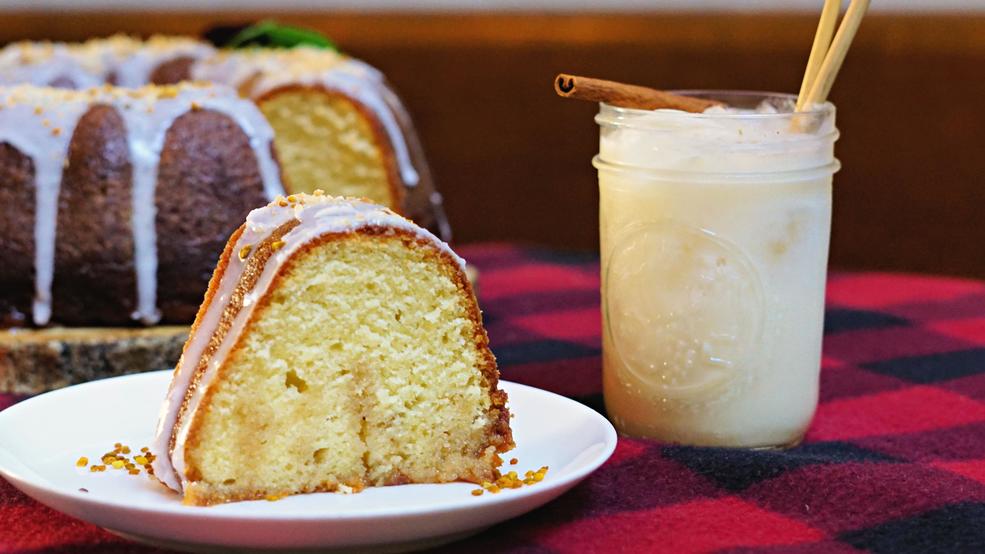 ‘Tis the season to be binging on festive sweets. That’s how the song goes, right? To help us indulge over the holidays, we reached out to six pastry chefs to find out which of their desserts they love the most at this time of year.

“I’ve made a lot of Bûche de Noël in the past, so I wanted to do something a bit more Italian,” says Dysart. After some consideration, she decided on Cassata Siciliana. Vanilla sponge cake soaked with orange liqueur and sweetened sheep’s milk ricotta mousse are enrobed with pistachio enriched green marzipan. A classic rendition might also include candied fruit and piped royal icing, but Dysart opts for a more modernist approach to the décor. Florets evoking snowflakes and miniature three-dimensional Christmas trees, all forged from buttercream, enwreathe the top of the 10-inch cake.

Inspired by her stepfather and husband’s Puerto Rican roots, Velez makes and gifts rum cakes to her family every Christmas. Her relatives are practically addicted. “I once tried to make a lasagna instead, but they weren’t happy,” she says. “They kept asking, ‘Where’s the cake?’” She offers a take on that tradition this holiday season, but adds a Grecian twist by finishing the boozy cake with tsipouro (pomace brandy) spiked glaze. It’s paired with an eggnog-like coquito cocktail bolstered by rakomelo (Greek digestif) that boasts plenty of coconut vibes and wintry warming spices galore, including nutmeg, cinnamon, and clove.

Elenor Apolonio-Frantz of the Hay-Adams

Growing up in the Philippines, Apolonio-Frantz’s family didn’t have an oven, so grilling or steaming were their chief forms of cooking. Her favorite celebratory dessert was leche flan with a dark caramel sauce. Similar to crème caramel, the Filipino version adds in orange zest and a touch of OJ. Now she makes a classic crème caramel at the holidays, but laces it with orange notes to recall the Filipino favorite. “It’s creamier than panna cotta,” she says. “Think of it as a crème brûlée, but with more body.”

No matter where you go in the world, you’re bound to find doughnuts in one form or another. Made only during Hanukkah, sufganiyot are Israeli’s take on the fried rounds. Levin makes his version using a traditional brioche recipe boosted with orange zest and brandy. He stuffs them with Nutella, seedless raspberry jam, or caramelized bananas – “It’s like dulche de leche meets banana, but darker and richer,” he says – and dusts them with doughnut sugar.

“Pumpkins and apples are more often showcased at this time of year, so pears get the shaft,” says Murphy. So she’s shining a light on the curvaceous fruit with a seasonal tart featuring Chai-laced roasted Bartlett pear compote and a Valrhona Dulcey chocolate mousse, which has nutty notes and a slight saltiness. A hazelnut-white chocolate shell spangled with candied hazelnuts coats the core. Plunge a fork in and you’ll be rewarded with a bite that’s super nutty and pear-rich, but not too sweet.