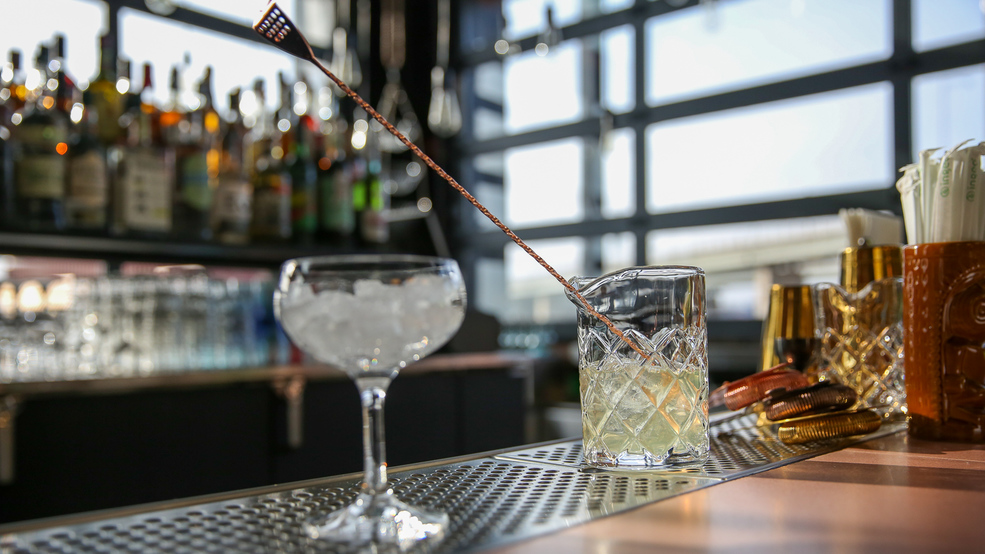 Whether you're stopping by solo after a rousing concert at the Anthem... (Image: Amanda Andrade-Rhoades/ DC Refined)
SEE MORE

It’s December, and you know what that means. Time to sip on rum and share big mugs of tiki drinks!

Ok, so maybe that wasn’t your first guess. But trust us, you’ve got an excuse to sip out of season.

It’s called Potomac Distilling, and it comes from Todd Thrasher, the bar maestro behind P/X in Old Town and the lobby in The Line hotel, among other boozy haunts.

Here’s how to approach its three stories of rum-soaked glory. Just follow the giant smokestack arising from the Wharf.

The moment: You’ve just left the Anthem after encore #2. You need a nightcap.
The move: Make your way up through the warren of tiki huts, banana leaves, bamboo and totem poles, past one bar and another bar, until you find a window overlooking the river. If you’re brave, keep going until you hit the rooftop fire pit, soon to be outfitted with blankets and heat lamps. From there, select thyself a classic tiki drink, or one of Thrasher’s own creations, helpfully divided into the categories “Fruity & Light” and “Boozy as Balls.” For the former, may we suggest the Mister Fancy Pants, a blend of white rum, Cocchi Americano, sherry and clarified pineapple juice. For the latter, think blackstrap rum, adorned only with Menta Branca, mint bitters and mint syrup.

The moment: Date night, in the form of a three-hour tropical staycation.
The move: Stake a claim to a pair of stools at the four-sided bar on the main level. It also looks out at the water—and into the open kitchen, where you can see them dishing out the mostly Hawaiian-influenced menu. Yes, this means you’ll find poke. But also coconut shrimp, tiki wings and grilled Spam. Once you get your fill of Mai Tais and Zombies, you can dial it back a bit with cheap bottles of Pacifico.

The moment: Exporting some of that tiki-ness to your home bar.
The move: Soon spirits to go will spill out from the basement-level shop. Right now, you can try their white rum and spiced rum at the bar. Before long, you'll be able to buy a bottle of each, as well as a green spiced rum, which promises a bit more gin character. Hopefully they’ll debut around the same time as the bottle shop and the distillery tours.