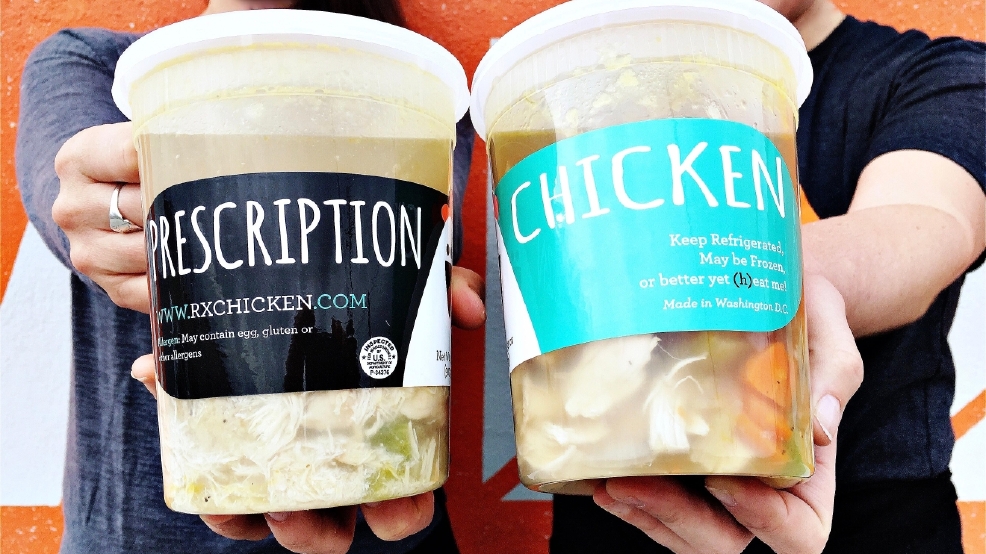 Val Zweig had a string of bad luck and came down with laryngitis twice in six weeks.

“Anyone who knows me, knows that this was God’s way of making fun of me,” says the talkative entrepreneur.

While ill, she was desperate for a bowl of hot chicken noodle soup, but she didn’t want to leave her apartment for it. Whole Foods would bring one over – for $45. That seemed beyond ridiculous. When she recovered, she began thinking there was a niche market for a chicken soup delivery service. With a culinary school degree and a resume that includes both restaurant PR and her current job with hospitality consulting firm VSAG, she was well positioned to make her fever dream a reality.

So she teamed up with her cousin, Taryn Pellicone, who has a degree from the University of Delaware in hotel and restaurant management, followed by a two and a half year stint with Potbelly as a general manager. After some discussion, the duo cooked up a quartet of base soups and launched Prescription Chicken at the beginning of September.

Grandma Style is a classic rendition – a primo Progresso – packed with shredded chicken, sprigs of fresh dill, your choice of matzah balls or egg noodles, and sautéed white onions, carrots, and celery. “We keep them a little al dente,” Pellicone says of the latter ingredients. “You never want a soup full of mush.”

The Hangover version was inspired by fire cider, a vinegar-based herbal tonic, so the spicy soup is packed with habanero and jalapeno peppers, turmeric, fennel seed, thyme, horseradish, and ginger. It arrives on your doorstep with a specially blended herbal tea designed to help with nausea and headaches, as well as a vial of Faust’s Awake Potion. “I like to think of it as an all-natural 5-Hour Energy drink,” says Pellicone.

To round out the offerings, there’s a vegetarian version and a gingery bone broth, which has proved popular with the CrossFit crowd.

The pair makes the soups several times a week in the commissary kitchen at Mess Hall, though they are open for business every day. Quarts of their belly warming elixir are available for delivery through UberEats, DoorDash, Postmates, Seamless, and GrubHub, or – if you’re willing to change out of your pajamas and jam a hat over your bed head – they can be purchased at Glen’s Garden Market, Odd Provisions, Smucker Farms, and elsewhere.

Since opening, they’ve tripled sales. The pair sends out approximately 25 delivery orders a day, each one accompanied by a handwritten note. Though they’re still working on understanding and reaching the D.C. market fully, they’re already thinking of where else the concept might do well. Dark, rainy Seattle is top of mind. The pair is also working on some new products, such as spicy matzah balls and deep fried matzah balls stuffed with chicken, which Zweig calls, “Jewish arancini.”

But for now, the two women are mainly focused on getting through what they expect will be a busy winter season. Hopefully, without any bouts of laryngitis.