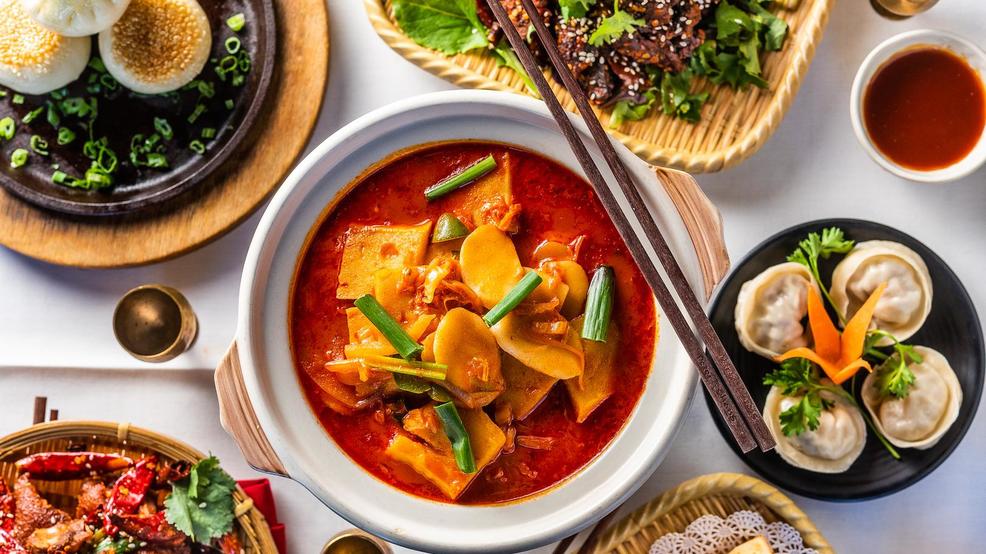 Some of the signature dishes at Mama Chang in Fairfax. (Image: Rey Lopez)
SEE MORE

The D.C. food scene is constantly evolving, and it can be hard for even the biggest food fan to keep up. Restaurant Rumblings is here to get you up to speed on the latest bar and restaurant news, from hot openings to exciting new menus and chef changes.

Shaw's crowded restaurant scene has a new option for Japanese dining, including a chef's omakase tasting. Zeppelin plans to offer dozens of fresh seafood and shellfish along with grilled meats and a high-quality cocktail and sake list. Talent includes brothers and mixologists Ari and Micah Wilder, who also helm the nearby Chaplin's restaurant. The sushi counter will be manned by chef Minoru Ogawa, who opened D.C.'s Sushi Capitol and also worked at the Mandarin Oriental. Snack on a la carte bites, or try multi-course menus starting at $65 per person.

Ballston Quarter is loving this hot chicken sandwich shop from Himitsu chef Kevin Tien. Spice levels for the chicken thigh sandwiches or tenders range from "not hot" to "too hot." A meal deal for either one with fries and a drink are $15. Also notable is the restaurant's 4 percent surcharge on all bills that will go to support staff health and wellness.

The former Smoked & Stacked storefront is now slinging grilled cheeses and wings alongside cold, tall canned beers. Fans of the old shop can nosh on a sandwich stuffed with Swiss cheese, pastrami, sauerkraut and Russian dressing. There are also Cuban and kimchi options. Wings come in a choice of Buffalo, Memphis, Old Bay, lemon pepper and General Tso rubs and sauces. TallBoy's bar will feature a rotating seasonal cocktail on draft, wines, booze and nine types of 16 oz canned beers from national and local breweries alike.

Grab a group and head out for Spanish tapas, wine and cocktails at the newest location of Boqueria. The Penn Quarter address features signature rotisserie chicken, ribs and pork shank along with a chef's counter for elevated dining. The restaurant also offers a menu of non-alcoholic "cocktails," and large-format plates that include a paella feast for up to 50 people. Brunch is on deck for later in March.

Hotels are all about travel, so it's fitting that the Ritz-Carlton's (1150 22nd St. NW) refreshed cocktail menu features a long list of travel-inspired recipes. Head inside to Quadrant, where lead mixologist Chris Mendenhall has added nearly 25 original drinks to the 90-plus page menu. Celebrate spring in D.C. with the Cherry Blossom in a Glass (Japanese whisky, Amaretto, house plum and cherry syrup, orange juice) or go bitter with the sound "aged" negroni. The bar's popular smoked old fashioned remains a solid option, too.

It's time to carbo load with your coffee thanks to new brunch-inspired pastas at Osteria Morini (301 Water St. SE). The savory dishes include a spinach pasta with mushroom, ricotta and fried egg as well as a mafaldine with pancetta, spinach and poached egg. Brunch pastas will be available Saturdays and Sundays from 11 a.m. to 2:30 p.m.

Chef Matt Baker's seasonal kitchen Gravitas (1401 Okie St. NW) is adding brunch to its rotation starting this weekend. Begin with a refreshing cobia tartare or rich chicken liver mousse for the table before moving on to sweet and savory entrees. Try a seafood-stuffed cioppino, a croque madame with Virginia ham and white cheddar or opt for classic brunch favorites like sourdough pancakes with glazed blueberries or a warm gruyere cheese omelet. Unlike dinner, brunch is ordered a la carte with prices ranging from $16 to $31.

Rakesh Singh is in as the head chef at Rasika West End (1190 New Hampshire Ave. NW), overseeing the kitchen and lending a hand to executive chef Vikram Sunderam. The North Indian chef plans to bring some of his own touches to the acclaimed restaurant.