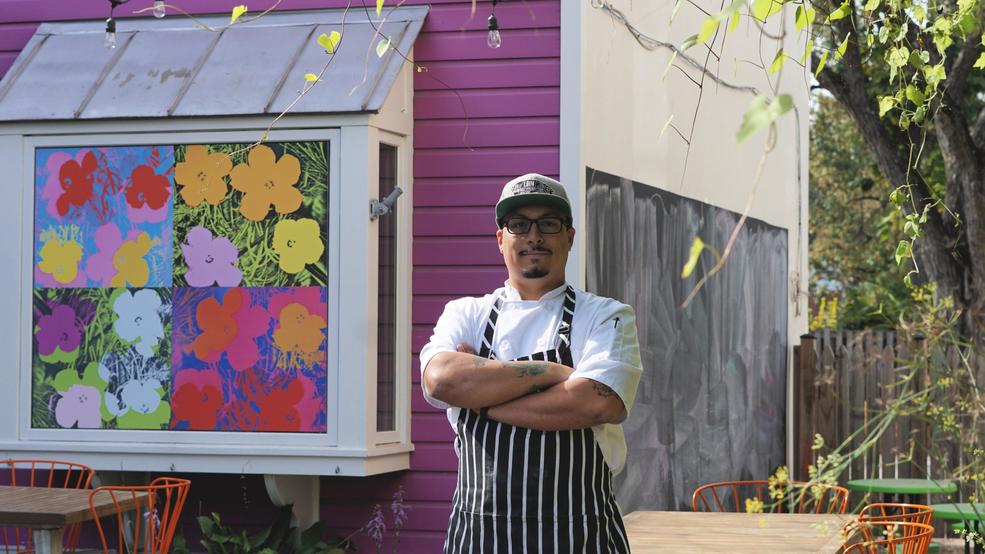 “This how I eat when I’m home and have the chance to cook for myself” is how Till describes his food at Evening Star. (Image: Courtesy Jonathan Till)
SEE MORE

D.C. has produced a clutch of culinary superstars, from Andrés to Ziebold. But who is going to be the next big thing? Here are five rising star chefs whose food you will fall in love with this year.

“It’s a choose your own adventure,” says Tang of his debut restaurant, which he is opening in Columbia Heights in early February with his wife and general manager Carey Tang. Diners each choose four small plates – three savory and a dessert – which are all shared amongst the tablemates. Offerings will be super seasonally inspired and vegetable forward. Though Tang describes the food as generally New American, don’t be surprised if you taste hints of Spain or Thailand, or anywhere else that’s exciting him in the moment. Dishes set to appear on the opening menu include shaved carrots with pickled ginger, yogurt sauce, a medley of fresh herbs and popped amaranth, as well as pommes puree with braised oxtail, crispy shallots and maple glazed rutabaga.

Executive chef Robert Curtis grew up in the region and cut his teeth at Brabo, Restaurant Eve and Bourbon Steak before taking a gig in San Francisco at Michael Mina’s RN74. Inspired by his Turkish girlfriend and a recent trip to her homeland, he has slowly transitioned Hazel from an Asian accented affair to a restaurant you could call Turk-ish. The options are divided into five sections of shareable plates –pita-style laffa bread with spreads, greens and beans, grains, meats, and large format entrees – with an emphasis on veg-centric preparations. Standouts include za’atar spiced crispy Kennebec potatoes accompanied by dollops of harissa aioli; charred Arrowhead cabbage crusted with crispy ginger garlic crumbles and orange caraway vinaigrette; and umami-rich porridge featuring braised rye berries, barley, rice and sunflower seeds.

Jonathan Till of Evening Star

“This how I eat when I’m home and have the chance to cook for myself” is how the chef describes his food. We want to come over for dinner. Standouts from the alum of the Hermitage Hotel’s Capitol Grille in Nashville and William Jeffrey’s Tavern in Arlington include crispy cauliflower tossed in fiery Korean barbecue sauce, chicory and black pepper brined roast chicken with porky honeynut squash gratin, and chicken fried oysters dressed up with pearls of hot sauce. A number of the dishes have family roots; the chicken liver mousse is his great grandmother’s recipe, while the tres leches apple crisp borrows pointers from his grandmother. And you’re likely to find personally foraged ingredients throughout the menu. A wintertime standout was gnocchi forged from ground acorns. Come springtime, look for stinging nettles and an array of wild mushrooms in the mix.

You can’t pin this enterprising chef down to one cuisine. Opening in late February in Alexandria, Chop Shop Taco is what McIntosh calls “a fresh interpretation of Mexican cuisine.” There are unconventional takes on tradition, such as a roasted brisket torta (sandwich) filled out with fried egg, chipotle black bean spread, and avocado, and golden fried arancini packed with rice, beans, and funky huitlacoche (corn fungus, which is revered south of the border) – plus a beefy jus on the side for dipping. However, the serial entrepreneur, who honed his craft working for Houston’s and Matchbox, also presides over Pendleton Carryout Co. – a pop-up space in Old Town offering rotating concepts helmed by himself and other businesses – where he currently serves pizza, Italian meat pies, and a stunning smash burger.

After a decade with Barcelona Wine Bar, a quartet of wins on Chopped, and the ability to boast that he beat Bobby Flay, Adam Greenberg is striking out on his own with Coconut Club, set to open the weekend of January 25th. The breezy eatery by Union Market boasts a life’s a beach mentality, Miami Vice color scheme and all the island vibes on the menu. Think poke bowls, garlicky shrimp inspired by Oahu’s north shore, spam-powered patty melt, and jerk-spiced, coconut milk brined chicken. Finish the night with a slice of coconut cream pie or a soft serve sundae. Crockett and Tubbs would surely approve.