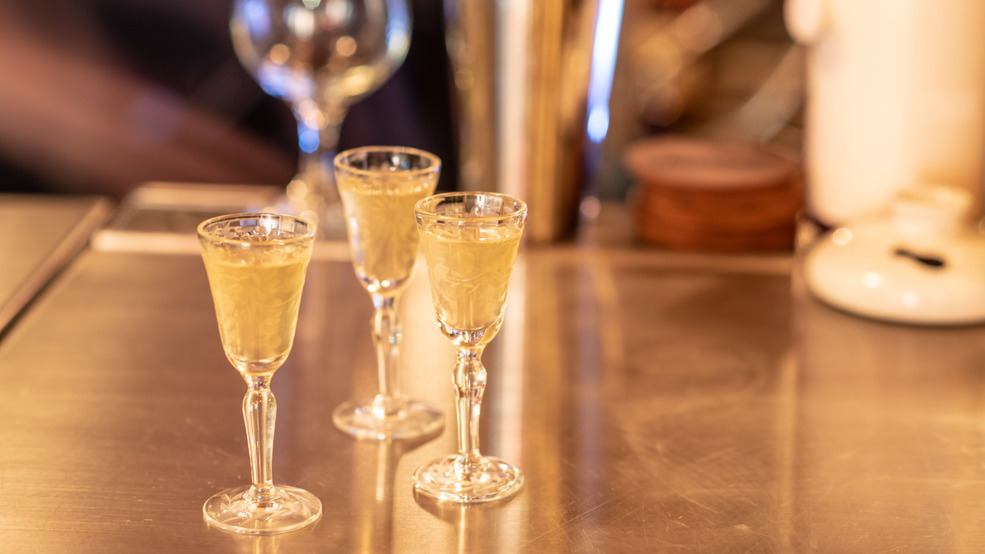 If your only experience with the rice-fermented beverage is clutching a steaming ceramic cupful over a bento box and not understanding what the fuss is about, Zeppelin is here to help. (Image: Robert Fairbairn for The Aperture Group)
SEE MORE

Stumped about sake? Zeppelin is the place to learn about Japan's native beverage

At the new Zeppelin in Shaw, you can find sushi, shishitos and a whole slew of sake. The beverage program run by Ari and Micah Wilder of Chaplin’s currently runs 65 bottles deep with six available by the glass. But the brothers are looking to expand the menu to eventually feature around 120 by the bottle and two dozen by the glass.

The list is divided into categories and already includes helpful tasting notes. If the duo are on hand, they are all too happy to help you select an option for you or for the table. But if your only experience with the rice-fermented beverage is clutching a steaming ceramic cupful over a bento box and not understanding what the fuss is about, read on.

What exactly is sake?

Though sake is often referred to as “rice wine,” the process used to make it is actually more similar to that of beer. Whereas wine is produced by fermenting sugars that are found in grapes or other fruit, sake converts the starch that’s found in grains of rice to sugar, which is then fermented into alcohol.

How many different kinds of sake are there?

“There are over half a dozen major categories and several subcategories generally,” the Wilder brothers explain. “They primarily differ based on rice polish ratio.”

Rice polish ratio refers to the percentage of the rice remaining after the brown husk--whose proteins and fats can lead to undesirable aromas and flavors in sake--is polished off. Generally speaking, sake made with rice that’s had a higher percentage of its husk polished off via milling will be cleaner and more refined; since it requires more rice to make per bottle it also tends to be more expensive. Junmai has no milling requirement, Honjozo has 70 percent of each grain remaining, Junmai Ginjo and Ginjo each have 60 percent remaining, and Junmai Daiginjo and Daiginjo have 50 percent remaining.

To further confuse the newbie, Honjozo, Ginjo and Daiginjo are fortified with alcohol; keep this in mind if you are looking to drink a lower or higher proof beverage, or just ask to see the bottle to check the ABV.

Are there other differences between types of sake?

Yes. Zeppelin’s menu points out that decisions the brewer makes can lead to other sake variations.

Nigori sake results from leaving some of the rice polishings in the batch, which renders it cloudy with a softer mouth feel that can be a good intro for those new to the category. Taru, or cedar sake, is made by storing the finished sake in cedar tanks.

Sake that’s not pasteurized twice as per usual is called Nama, while those aged longer than typical are called Koshu. Adding more sake than water to the brewing process leads to Kijoshu or dessert sake.

Finally, sake reaching peak fermentation without being diluted to reduce its ABV is Genshu; this style is about 17-19 percent ABV rather than the more common 15-16 percent ABV and can be thought of as “cask strength” sake.

What is the biggest misconception about sake?

One peek at Zeppelin’s sake section of the menu and you will see that it reads like a wine list. But unfortunately, sake is not always treated or approached the same way wine is.

There are decided aroma and flavor differences among styles and brands. Daishichi Minowamon, a Junmai Daiginjo sake, is described as having “graceful aromas of stone fruits, medium-dry, delicate and creamy sweetness with moderate acidity, luxurious and elegant,” while Narutotai Nama Ginjo Genshu, a Tokubetsu Junmai, has a “full and rich flavor, slightly fortified, slightly funky and cask strength.” These two are about as similar to one another as an elegant, light-bodied pinot noir and a grippy, viscous cabernet. In other words, not at all.

What is the proper serving temperature for sake?

Though sake has traditionally been served warm, modern brewing practices mean that today most tastes better with a little chill. But that means a little chill. Just as drinking a white wine too cold can mask its bouquet and taste, sake that's served at too low a temperature will lose its nuances and character.

What are some brands to look for?

“Some go-to labels are the Katsuyama Den Junmai Daiginjo on the higher price point and the Kiku Masamune Junmai Taru on the lower price point,” they say. “And if you’ve never tried a Sake Taru [cedar-aged sake] they are really amazing for something a little less mainstream; we usually recommend this particular sake for whisky drinkers.”

What are some unexpected sake and food pairings at Zeppelin?

The Wilders are drawn to silky pork and short ribs with higher acid sakes and the aged Daiginjou. And the O-toro and Anago work with all of the sakes.