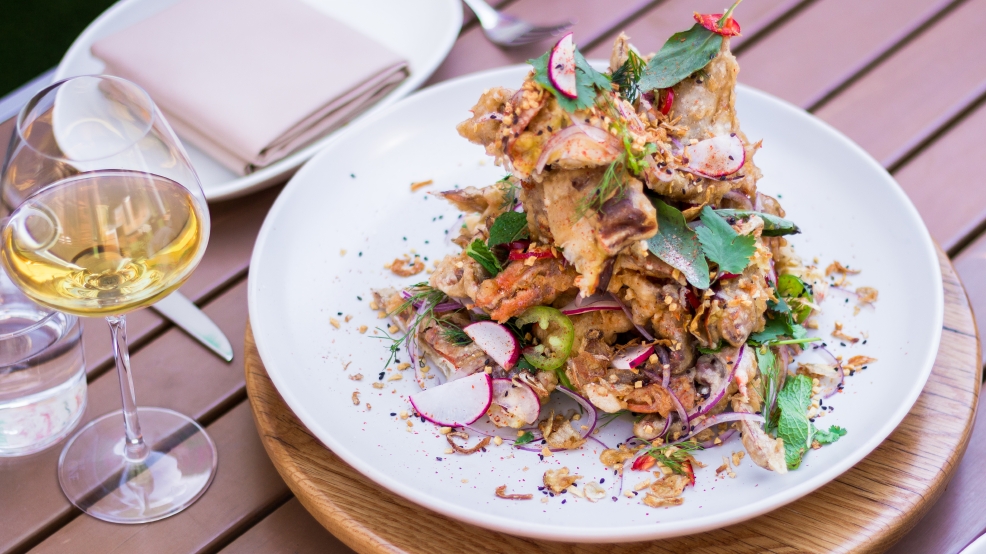 It’s officially spring in the mid-Atlantic when soft shell crabs start appearing on menus. The highly prized clawboys from the Chesapeake Bay are as unique as they are delicious. Possessing a crackly parchment-thin edible shell and sweet, succulent flesh rich with the briny flavors of the sea, they are devoured whole. Here are six stunning preparations showcasing this delicacy from the deep blue.

One of the most breathtaking presentations at Mike Isabella’s modern-minded Spanish-Moroccan restaurant is the epic Maryland crab bomba rice. Served in a paella pan, a thin layer of the Spanish rice is enriched with jumbo lump crab and crab fat to reinforce the flavor of the local crustaceans. Executive chef Michael Rafidi tops off the expanse of carbs with tempura fried soft shell crabs, pickled tomatoes, and verdant spring vegetables, like ramps, peas, and fava beans. Half a grilled lemon sits on the side, so diners can squeeze on a touch of acid to cut through the richness of the dish.

Chef de cuisine Brad Deboy adds an Asian accent to his soft shell preparation. The crabs are flash fried in a tempura-style batter, which adds an extra crunch when biting into them. He makes a molasses-rich black garlic barbecue sauce and a “not hot, but warming” fermented chili paste to dot the pan the crabs arrive in, and dresses up the crabs with roasted spring onions, pea shoots and fresh green strawberries tossed in light lemon vinaigrette.

These crabs are whales. That’s because they’re the largest size available, clocking in at 5.5 inches or more wide. Chef-owner Dean Gold is very particular how he prepares them. “I really don’t like battered or crusted soft shells, because I want to taste the soft shell,” he says. So he lightly flours and dusts them with a house-made seasoning mix he calls Silk Road spices, which includes Aleppo pepper, black cumin, za’atar, sumac, and dehydrated sour grapes. He places on crab atop a tangle of linguini lavished with white wine, lemon, and classic Italian herbs.

While playing around with ideas for what chef Todd Gray calls the restaurant’s “nuevo Latino vegan brunch,” his staff developed a killer black bean pupusa. The Salvadorian specialty serves as the perfect vessel to hold the restaurant’s buttermilk brined, simply sautéed soft shell crabs. To add further flavors from Central America, Gray gussies them up with salsa verde and cilantro, plus a pickled red cabbage and red onion slaw for extra crunch and a pop of brightness.

What’s better than a pair of soft shell crabs? Those stuffed with even more jumbo lump crab meat. This truly decadent dish is finished off with the diner’s choice of garlic-herb butter, toasted almonds, or bacon (diners are welcome to order a different topping on each one) and served with roasted spring vegetables. The dish has been a favorite at the restaurant for over four decades, so guests start calling in March to find out when it will be back on the menu.