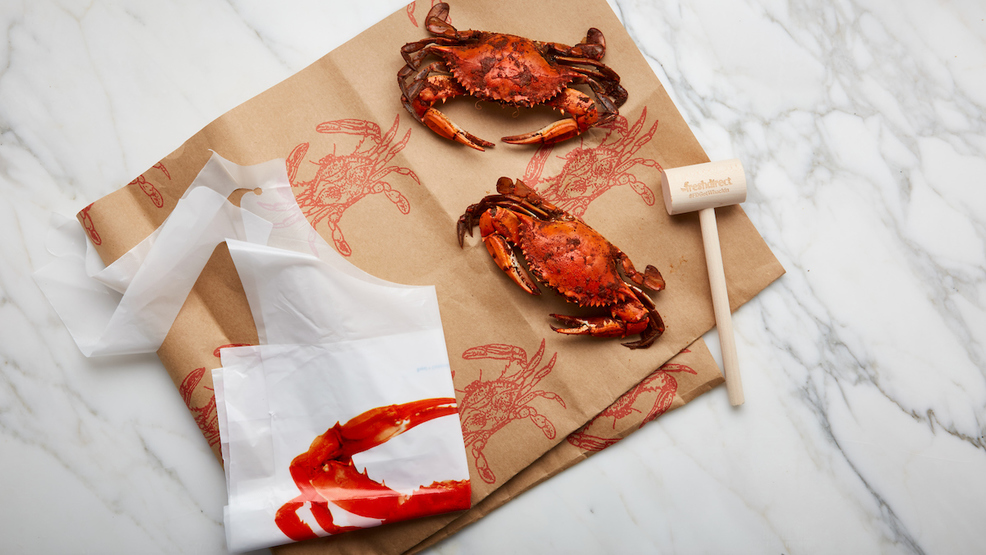 When we learned that FreshDirect, an online grocery delivery service that launched in DC this April, was offering a blue crab party pack for $29.99 through Labor Day, we had to try it for ourselves. (Image: Courtesy FreshDirect)
SEE MORE

Sweet Deal Alert: Chesapeake Bay crabs delivered to your door for less than $30

As much as we love to hop in the car, open the windows, turn up the radio and head east to a bayside crab shack, the reality of a busy Washingtonian’s life means that’s not always a possibility.

So when we learned that FreshDirect, an online grocery delivery service that launched in DC this April, was offering a blue crab party pack for $29.99 throughout crab season, we had to try it for ourselves. It seemed almost too good to be true — a dozen fresh local crabs steamed with Old Bay, two wooden mallets, four plastic bibs and a festively decorated butcher paper tablecloth cover for less than 30 bucks? What’s the catch?

Turns out the only catch is that you’ll be hooked on indulging in crab at your own dinner table or back porch rather than making the long drive east on Route 50. All you need to add is a six-pack of beer, a few ears of corn and some bowls of melted butter or apple cider vinegar — perhaps spiked with a bit more Old Bay from the pantry — to make this meal one water view away from being on the bay. (The butter and corn can also be ordered from FreshDirect, conveniently enough. The beer will have to come from the corner store, however.)

Here’s how it works: Head to the FreshDirect website the day before you’d like to start cracking your crabs; choose a two-hour delivery window — which could be 5-7 p.m., aka, dinnertime; invite one to three friends; sit back and wait for deliciousness. The box, which normally costs $49.99, isn’t available for Tuesday deliveries and is guaranteed to stay fresh for at least two days following delivery.

It should go without saying that the fact that there is no prep time or dirty pans — not to mention minimal cleanup — is all part of the allure of this deal. Also, if you sent one of these to a friend or family member as a gift, you’d pretty much be considered the coolest person ever.

At this price, you shouldn’t expect a box of jumbos to arrive at your door — but that's exactly what you'll get. "They average approximately 6 inches from the tips of the shells," says FreshDirect Seafood Merchant Michael Kanter. "As the season progresses, the crabs get bigger, and we expect them to average 6 to 6.5 inches across or larger in August."

If you’re unfamiliar with the anatomy of a crab, there’s a handy how-to-pick card that comes with the package. Of course, in this magical era of YouTube, you can also find videos such as this one on how to properly pick a crab.

Aside from making that annual trek to Cantler’s, Mike’s, Captain Billy’s or whatever your go-to crab spot happens to be, this is the best way we can think of to cross crab-picking off your summer bucket list.