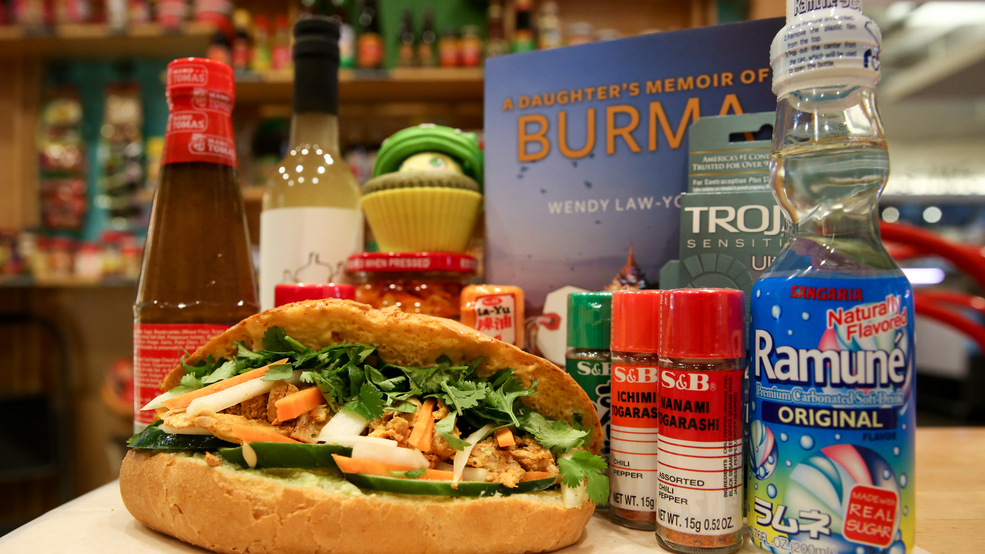 Trying to decide what to purchase at Toli Moli can be overwhelming, so I've created a guide of the 11 must-buy items. You're welcome. You can thank me by buying me a Ramune and a tandoori chicken sandwich. (Amanda Andrade-Rhoades/DC Refined)<p></p>
SEE MORE

In Burmese, the phrase ‘toli moli’ means ‘a little of this and a little of that.’ It’s a fitting name for the pan-Asian-with-a-touch-of-Latino bodega in Union Market, which opened in early December 2017. It’s the latest venture from co-owners Simone Jacobson, her mother, Jocelyn Law-Yone, and Eric Wang, who previously operated a now-closed stand nearby with the same name that specialized in falooda, a multi-textural, multi-component cold Indian dessert (don’t worry, they still offer it).

Their chic new shop – which lives in the space once occupied by Erik Bruner-Yang’s Honeycomb market – was inspired by New York City’s bodegas. Accordingly, the carefully curated stock list has multicultural and multifunctional appeal at every price point, starting at $0.50. Everyday household items are shelved alongside imported specialty foods and a curated selection of local products from the likes of Misfit Juices, Snacklins, and Z&Z Za’atar. “Some people come in for candy and Band-Aids, and then there are people who come into the shop for their pantries,” says Jacobson.

Trying to decide what to purchase can be overwhelming, so I've created a guide of the 11 must-buy items. You're welcome. You can thank me by buying me a Ramune and a tandoori chicken sandwich.

The spiced coconut vinegar is most commonly used as a dipping sauce for Filipino roasted lechon (pork belly), but it works well with many pork preparations.

“It’s our take on a banh mi, though it’s not Vietnamese in any way,” says Jacobson. The tubular sub is packed with plenty of meat, house-made daikon and carrot pickles, cucumbers, fresh cilantro fronds, and a swipe of chili mayo.

Keepwell Vinegar began producing in the shop’s space while it was still Honeycomb. “I love that they started here,” says Jacobson. “It’s full circle. Plus, their vinegar's have great cross-cultural, cross-culinary applications in both beverage and food.”

To enjoy the Japanese soda, push in the top and a marble drops into a cradle in the neck of the bottle. “It’s Asian innovation at its best,” says Jacobson. “The marble makes sure you don’t drink the carbonation too quickly and it activates the carbonation. Watching children and adults experiencing it for the first time is fun.”

A Daughter’s Memoir of Burma

Written by Jacobson’s aunt, Wendy Law-Yone, the searing account tells the story of her grandfather's life and the country’s violent 1962 coup.

The seasoning better known as MSG. “There is a lot of misunderstanding and myths about it,” says Jacobson, who urges home cooks to put aside their prejudices and give it another try.

Crafted by Wang’s cousin, MJ Hsu, it's the perfect tchotchke for your cubicle or a shelf in your home office.

These super funky shoots are tender, but still have a nice crunch. Jacobson recommends throwing them into a stir-fry.

Warning: this shirt does not give you the power to rap “C.R.E.A.M.” in Burmese, but please livestream yourself if you attempt this feat.

The shop’s top selling chili is perfect for drizzling on whatever you’re eating to add a hit of heat.