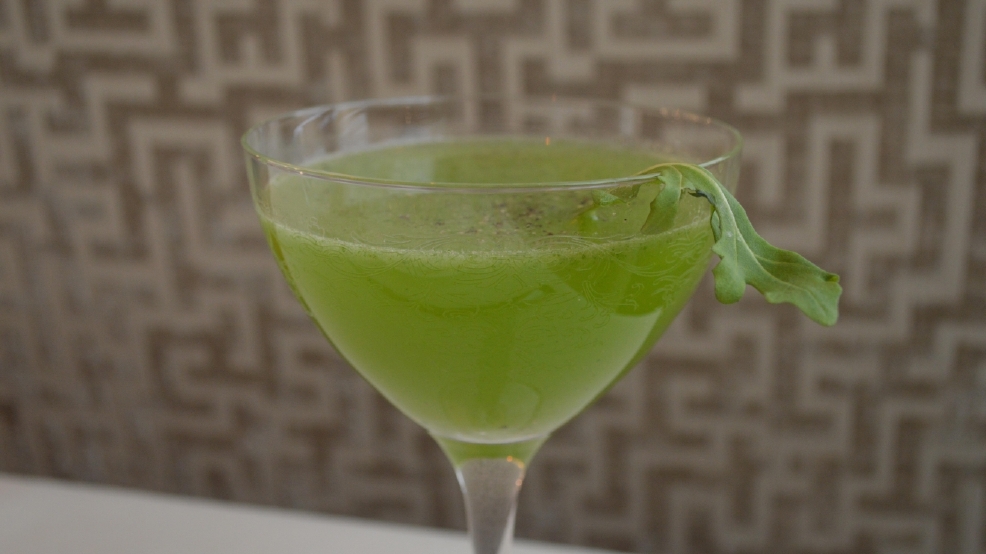 These organic and sustainable cocktails are all the green you&rsquo;ll need on St. Patrick&rsquo;s Day

If you want to get into the spirit this St. Patrick’s Day but can’t stomach a pint of neon-tinted cheap beer, order a "green" cocktail instead. Spirits, mixers, infusions and produce that are sustainable, certified organic or crafted using organic practices make drinks taste better. Here’s where to get your garden fix around town this month--long after we put away those shamrock t-shirts and wash out the temporary emerald-hued hair dye.

For their Arugula Martini ($13), baby arugula from a farm in Lakeville, Pennsylvania is muddled to create a natural green color and peppery flavor. It’s mixed with the slightly bitter and saffron notes of the organic botanical-based Nolet’s Gin, fresh lime and lemon juices, agave nectar and brightly sweet St. Germaine Elderflower Liqueur, and garnished with freshly ground pepper and an arugula leaf. “Every element combines for a result that tastes healthy and refreshing – almost as if you’re drinking a bed of greens,” notes head sommelier Moez Ben-Achour. “The beauty of this drink is that it exudes freshness; it has an almost earthy quality from the arugula, black pepper and botanical notes--it’s about as ‘farm-to-bar’ as you can get.”

The lobby bar at the Fairmont Hotel has both organic cocktails and “Rooftop Series” drinks on its menu; the latter uses honey curated from the 100,000 Italian honey bees on its rooftop garden--part of the hotel’s commitment to sustainability. The Beetini ($15) mixes Tito’s Vodka with St. Germaine, rooftop honey syrup, fresh lemon and Angostura Bitters, topped with a citrus blossom harvest mist; the Honey Rye Buzz ($16) shakes Knob Creek Rye Whiskey with Benedictine, rooftop honey syrup, fresh lemon and organic bitters, strained over one large ice cube and garnished with an orange and cherry flag. Organic libations include the Cucumber & Sage Martini ($14), with Crop Organic Cucumber Vodka, Cointreau, organic lime syrup and fresh sage, shaken and served up. "The organic trend has been spreading for years, and our guests are increasingly aware of this when it comes to their beverages,” says general manager Shane Krige. “They appreciate and expect fresh and unique ingredients.”

“Fresh ingredients make better cocktails--we’re firm believers of that at Bourbon Steak, which is why we start from scratch every single day from orange slices down to hand-carved ice,” says head bartender Torrence Swain. “Organic production is the same way – it’s a labor of love--like most things, there’s almost always a correlation between effort and outcome.” And, he notes, traditional spirits that have been around for generations have often always used organic and sustainable practices--they’re just not often technically certified as that process is newer. Swain calls Bourbon Steak’s Little Dragon cocktail ($16) a raspberry refresher with a spicy bite. For it, he mixes Barr Hill Gin (made with raw, organic Vermont honey) with lemon, spicy cane syrup, raspberry and Combier Framboise, served short over ice and garnished with fresh raspberry and mint. “It’s cooling and fruit-forward, but it’s got a nice little zip in between from the spicy cane,” he says. “That edge gives it some complexity that appeals to those who want something with some kick.”

Served in a glass pipe, the Smoke cocktail ($16) stirs Deanston 14 Year Organic Single Malt Scotch Whisky with house made organic demerara syrup and Bar Keep Organic Bitters, garnished with an expressed orange peel and finished with Applewood smoke. The drink’s flavor profile, says beverage director Ricardo Murcia, is similar to an Old Fashioned, with pronounced earthiness and smoky notes. “The trend of organic cocktails is ongoing and something that will continue as people become more knowledgeable in regard to what they are eating and drinking,” predicts Murica. “In the end, people don’t see it as an ‘organic cocktail;’ they see it as a cool cocktail that just happens to be organic.”

The Count Camillo ($14) is the Puglian restaurant’s twist on the classic Negroni, and it starts with a base of St. George Gin--from one of the country’s first craft distillers. It’s stirred with Contratto Bianco Vermouth, a semi-sweet vermouth, and Campari that’s infused with Bull’s Blood Beets from Path Valley Farms, an Amish collective in Pennsylvania that harvests some of the region’s best (the earthy notes of the beets also offset some of the Campari’s overt bitterness.) “Because the Negroni is our most popular cocktail, the Count Camillo is a good option for guests who want to try a different variation or have a milder take on the classic,” head bartender Julien-Pierre Bourgon points out. “The cocktail program at Masseria is meant to complement and reflect the cuisine; artisanal, peak-season products and produce are used in the kitchen, and the same goes behind the bar.”