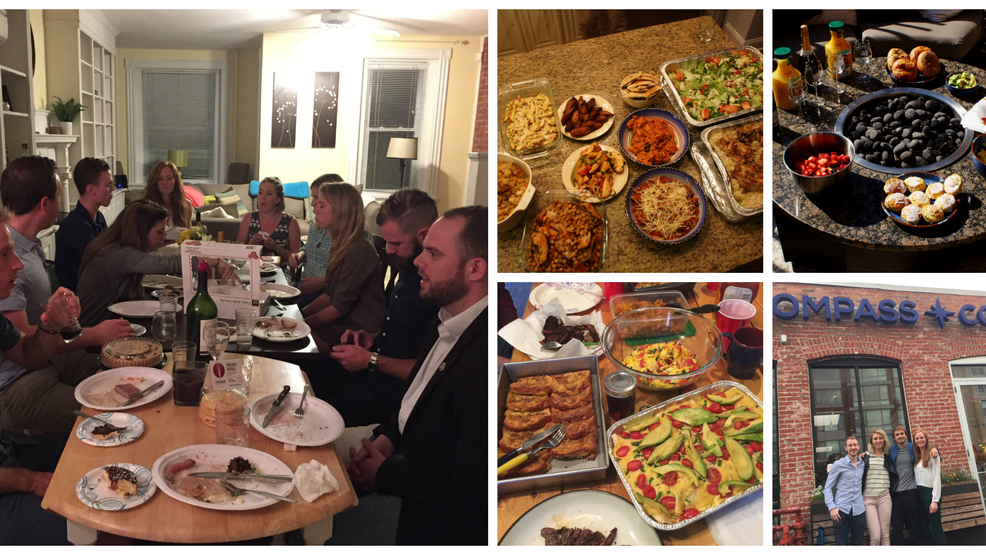 I grew up in a house where family dinners were a respected institution. Come dinnertime, we always sat down at that table to share a meal and catch each other up on our days. Nowadays, the closest I get to "family dinner" is when all of my roommates are in the living room at the same time enjoying our Trader Joe's frozen dinners and watching the latest Bachelor(ette)'s antics on a Monday night. So when I heard there was a group in D.C. trying to make potluck dinners cool again, I was all in! (Image: Courtesy MealTribes)
SEE MORE

This potluck meal club is bringing dinner table conversations back

I grew up in a house where family dinners were a respected institution. Come dinnertime, we always sat down at that table to share a meal and catch each other up on our days. And sometimes, that was no easy feat considering I had a lawyer father and a mother in government whose commute was an hour-plus on a good day! But no matter what, that hour was our sacred time to reconnect and we all valued it.

Nowadays, the closest I get to "family dinner" is when all of my roommates are in the living room at the same time enjoying our Trader Joe's frozen dinners and watching the latest Bachelor(ette)'s antics on a Monday night. So when I heard there was a group in D.C. trying to make potluck dinners cool again, I was all in! I reached out to MealTribes to see how I could join their cool kids dinner gang, was told to bring a dish to share to an apartment in Columbia Heights one Wednesday night and the journey began.

MealTribes was founded by 27-year-old Jared Gold as a way to "give people an outlet to be themselves, meet new people... and help re-ignite peoples' thirst for life," says Gold. Like many start-ups in D.C., the idea was born out of Gold's own feelings that something was missing in his life.

"I've always loved potluck dinners and wherever I go, I'm always looking for meaningful conversation that isn't superficial, but I couldn't find it anywhere," says Gold. "I also really like connecting people, so I thought I'd have an 'awesome people potluck dinner.' After the first one, people suggested we do another. And another." I think you see where this is going!

Multiple potluck gatherings later and Gold's Tribe has expanded. At the second dinner, Gold was approached by 27-year-old personal trainer Cammie Wolff who said "Whatever this is, I want in." At the next dinner, 27-year-old Marin Galvin asked Gold if she could share some ideas she had for the concept with him. And last, but certainly not least, was 23-year-old caterer Dylan Nunn, who connected with Gold, attended one dinner and was "all in."

As I buzzed myself in to a swanky apartment building right above the Columbia Heights metro station for my first MealTribes dinner -- sesame noodles and rosemary focaccia bread in hand -- I had to admit to myself that I was a bit nervous. I knew no one that was going to be at this dinner, and I didn't even have the security blanket of sharing a common connection such as career with my fellow dining companions; I had resisted the urge to google the eight of them in order to make organic connections. All I knew were their names and what dishes they were bringing, which had been discussed in a pre-dinner email sent by Gold two days before the dinner. Oh, and did I mention that we weren't allowed to talk about politics? While that isn't mandated anywhere on the MealTribes website, discussed in the pre-dinner email or dictated by the hosts, it seemed to be an unwritten rule as several of the guests at my dinner mentioned it in passing. Gold says that "as long as it's polite discourse, being respectful of others, we want people to push the boundaries of conversation."

Other than my general nerves of making conversation with eight total strangers, I was most curious to see if the experience felt genuine, if the attendees motives for being there seemed pure or if it was all merely another D.C. opportunity to network and promote oneself. To my great delight, the latter was not true at all. In fact, we were encouraged to discuss who we are, rather than what we do, a concept I seriously struggled with as I kept wanting to identify myself in terms of my career: "I'm a writer" or "I'm here tonight because it's my job to write about this." Instead, I found myself using phrases such as "I'm a person who enjoys making observations about human behaviors and interactions."

From my observations, I would say there were two camps of people that attended my MealTribes dinner. About half the gang seemed to be off-the-charts extroverts who love as much interaction with people as possible, and put themselves in situations where they can meet new people as often as they can. And then there were those who seemed to be doing this as a way of venturing out of their comfort zone, whether they were new to the area and looking to make new friends or simply wanted to try something new and different.

As we enjoyed our delicious hodge-podge meal comprised of a spinach, blueberry and goat cheese salad, homemade meatballs, sesame noodles, ham sandwiches, two types of bread, blueberry tart, watermelon and raspberry lemonade and an amazeballs homemade peach cobbler, the conversation flowed naturally from discussions of the five love languages (how we perceive them in others, what our own says about us and how much emphasis we should place on that trait in relationships) to how we create communities, where to take salsa dancing and line dancing classes in D.C. and what we were most grateful for that night. Surprisingly, there never seemed to be awkward pauses or empty silences to fill with chit chat, and conversation topics were more organic than I expected.

While we for the most part avoided the conversation of what we do from 9-5, I left the dinner with snippets of knowledge of my fellow tribers' main interests. There was the California transplant who "was the kid who actually liked it when his parents talked politics at the dinner table" and loved D.C. for its unabashed wonkiness; the girl who had just graduated college a few weeks prior and was studying for her nursing boards while trying to navigate post college life, but still residing in her college town; her sorority sister who had just finished her eight-week long flight attendant training and was extremely grateful to be starting a career with Delta, which she hoped would give her an opportunity to fly her parents back to see their hometown of Seoul, South Korea; and the avid traveler who had relocated from India to the U.S. less than two years ago and found D.C. to be an extremely friendly city.

Gold says that while dinners typically include at least one of the four co-founders currently, he hopes to create an environment where the dinners run without them and hosts/hostesses are "empowered to host killer events easily."

Though MealTribes only officially launched in late May of this year, the club has been in beta since early January and has already hosted around 12 dinners and brunches, ranging from 4 to 12 guests. The co-founders seem to agree that around 8-10 people is the ideal number for a balanced meal.

The next meal will be held this Sunday, June 25 at noon, and four events are scheduled for July. Currently the best way of signing up for a dinner is joining the MealTribes mailing list on their website, and they will reach out to you to coordinate a dinner.