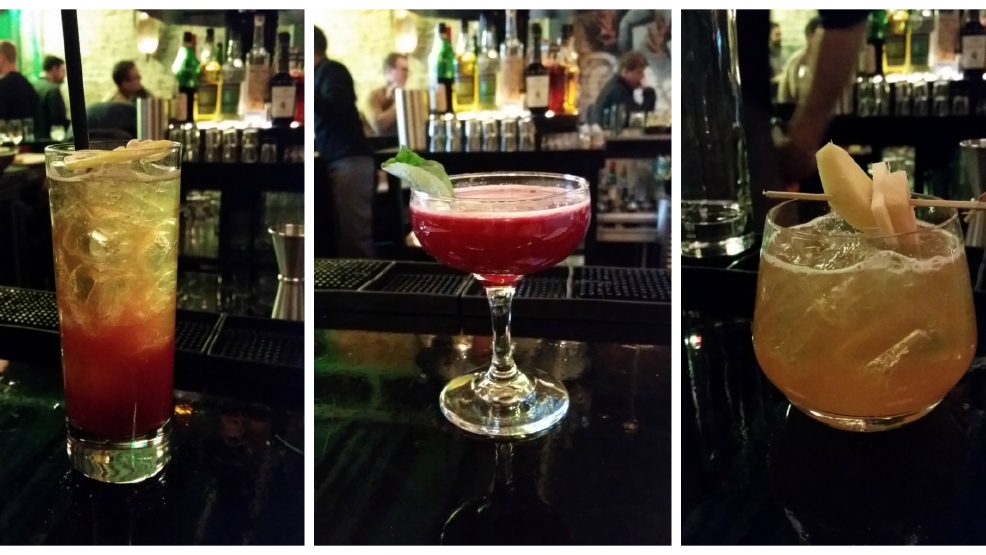 For its beverage program, Tiger Fork collaborated with a Traditional Chinese Medicine specialist who helped them create a selection of TCM cocktails. The four resulting libations, all mixed or infused with a bevy of herbs, roots, flowers, plants and spices, are touted to relieve fatigue, boost your immunity and aid other afflictions--but you don’t need a spoonful of sugar to make these medicines go down. (Images: Kelly Magyarics)..
SEE MORE

The first thing you notice about the bar inside Tiger Fork is its octagonal shape, a nod to the Chinese belief that eight is an auspicious number. (In Chinese, the word for eight shares a similar pronunciation with the word for wealth or fortune.) And for sure, you’ll be fortunate to grab a stool and any one of beverage director Ian Fletcher’s cocktails at the new bustling Cantonese spot in Blagden Alley, overseen by executive chef Irvin Van Oordt.

For its beverage program, the team collaborated with a Traditional Chinese Medicine specialist who helped them create a selection of TCM cocktails. "Creating the menu was actually a really fun and educational process for me,” Fletcher says. We learned the properties of all the barks, plants and other ingredients we are incorporating into our TCM cocktails; we wanted to make sure that each cocktail had actual curative properties as these ingredients are often used for the same reason on a daily basis in Hong Kong.”

The four resulting libations, all mixed or infused with a bevy of herbs, roots, flowers, plants and spices, are touted to relieve fatigue, boost your immunity and aid other afflictions--but you don’t need a spoonful of sugar to make these medicines go down. Fletcher’s 8 O’Clock Light Show gives you a boost of energy with Thomas Tew Rum, mandarin, yuzu, cacao, kola nut, astragalus, ginseng and guarana seed; it also smells amazing thanks to a garnish of a charred cinnamon that’s lit in front of you. Libido feeling a little low? Happy Happy will make you (and your partner), um, happier in the sack. It starts with baijiu, a clear, unaged Chinese spirit usually distilled from sorghum but which can also be produced with wheat, barley, millet or glutinous rice. Mixed with a Szechuan sour cherry soda as well as pomegranate, cardamom, ginseng, ginkgo, muira puama, passionflower and saffron, it may or may not rival Spanish Fly for its ability to make things hotter between the sheets, but it is irresistibly tart, spicy and multi-layered.

Most popular on the TCM side of the menu are the purifying properties of Nathan Road. Is it an oxymoron to sip a potent potable that’s said to be a drink to help you detox? Maybe so, but Fletcher’s combination of Bourbon, Angostura Bitters, plum wine, lemon and a heady mix of hibiscus, calendula, mullein flower, purple basil, English violet, echinacea, stevia leaf and rhodiola is like a flower garden in a glass--aromatic and pretty, while at the same time not at all cloying or sweet. My favorite of the TCM bunch is The Bird Market, which counters low resistance and promotes overall health (and who can resist that?) Herbal and tangy, it’s a lovely creation of gin, yellow Chartreuse, Peychaud’s Bitters, bergamot and herbs bai zhu, fang feng, astragalus, elderberries, honeysuckle, elderflower, echinacea, stevia, sage and thyme.

Because the TCM drinks are based on holistic recipes, their potency comes with a disclaimer: staff recommends no more than two of these drinks per visit. If you want something else to wash down your orders of small or large plates (my faves are the Kowloon Bun, a dairy cow dumpling with ginger and black vinegar, pickled and crispy sour potatoes with dill and cilantro, and pork ribs doused in soy and ginger and served with smoky, savory Happy Lady Spice), Tiger Fork also offers a selection of original and classic sips. F.I.L.T.H., a derogatory term for unsuccessful bankers in the UK who emigrated to Hong Kong (“Failed in London, Try Hong Kong) mixes Barr Hill Gin (made in Vermont with raw honey), with ginger liqueur, ginseng liqueur, black tea, lemon and Hellfire Bitters; the Star Ferry is named for the fleet of boats that have shuttled passengers back and forth from Hong Kong Island and Kowloon since 1888, and mingles Corsair Spiced Rum (a vanilla-forward, light on the baking spices spirit from Nashville) with yuzu and a housemade tonic made with funky umeboshi, or Japanese fermented salt plums--said to aid in digestion.

“I’ve experimented with fermented plums before, and wanted to try and make a tonic with it,” Fletcher told me. “In my mind it was tart and bitter rounded out by sweetness and spice--I [know I] wanted to make a spiced rum and tonic.” The plums are fermented in a five-gallon container for two to four weeks, and the drink also has a whole version of the wrinkled fruit on top as a garnish. Salty, bright, sweet and bitter, it pairs nicely with the crispy whole dorade with Chengdu sauce, eggplant and Chinese celery.

Fletcher is excited to incorporate more exotic fruits, sakes and tea drinks in the upcoming warmer months. Of course, if these drinks sound a little complex or esoteric for you (they shouldn’t, by the way), Tiger Fork also has a selection of sake, beer and wines (the latter are curated by Sebastian Zutant of Red Hen.) And though it’s not on the menu, Fletcher serves Chinese version of a Pickleback for those in the know. The Chooch Magooch serves up a shot of baijiu and a shot of the highly addictive spicy-sweet brine that’s used in the smashed cucumber salad.