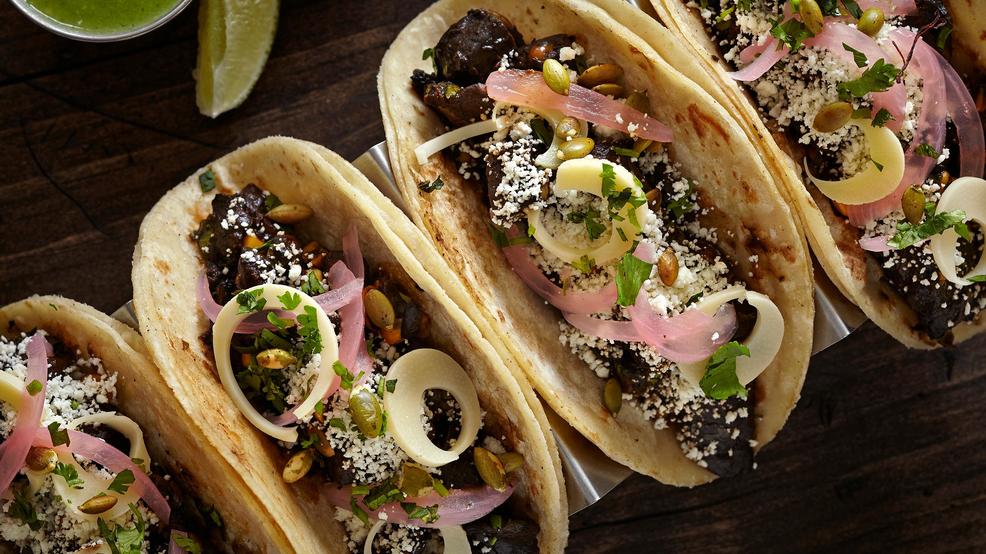 “It embodies Taco Bamba more than any of our tacos,” says chef-owner Victor Albisu. “It’s the one I eat the most myself.”(Image: Courtesy Taco Bamba)
SEE MORE

Whether you don’t eat meat or are simply saving your calories for more tequila-laced cocktails, these healthy(ish) vegetarian tacos are the perfect way to celebrate Cinco de Mayo.

Creamy potato and kale at Chaia

This is the OG in the plant-forward taqueria’s lineup. They’ve been serving it since they debuted as a stand at the FreshFarm Market near the White House back in the spring of 2013. “It has remained the most popular item on our menu since then,” says co-founder Bettina Stern. “Perhaps because it has the most fat. It’s made with real foods that are a little guilty.” Served in a homemade grilled corn tortilla, it features roasted red skin potatoes and sautéed dark leafy kale tossed with an ultra creamy roasted poblano sauce. It comes garnished with pickled red onions, salsa verde and pepper jack cheese.

It's fitting that owners Carolina McCandless and David Perez – she handles the front of the house; he’s the chef – met at Gracias Madre, a vegan Mexican restaurant in the heart of San Francisco’s Mission district. Close to half the menu at their Takoma Park fine casual cantina ended up being vegetarian. “It’s the way we feel about how people should be eating,” says McCandless. “People should be conscious of the amount of meat they eat.” An exemplary example of their plant-forward options is this boozy taco featuring organic cremini mushrooms sautéed in liberal amounts of garlic and tequila. Served in a house-made heirloom corn tortilla, it arrives with cilantro and chopped white onions. Queso fresco and guacamole are optional toppings, but highly recommended.

Chef-owner Victor Albisu was initially lukewarm on the idea of vegetarian tacos, because he wanted an option that would be satiating and satisfying enough for carnivores (and himself). He chose to work with hearty portabella mushrooms since “they’re like sponges,” he says. “They take on fat and flavor like no other vegetable.” He also wanted the spice factor to be through the roof, so he roasts the shrooms with pureed chipotle peppers and adobo seasoning. Lime juice adds a hit of acid, while corn brings a pop of sweetness. The taco arrives with cotija cheese, pickled onion, heart of palm, cilantro and pepitas. If it’s too hot for you, a dollop of guac will dampen the fiery flavors. “It embodies Taco Bamba more than any of our tacos,” says Albisu, who has become a big fan. “It’s the one I eat the most myself.”

The tiny kitchen only has room for induction burners, so owner Matt Carr and chef Bobby Dodd had to get creative when designing the menu. Vegetables are easier and quicker to cook, so many of the tacos are plant based. Case in point is the chorizo-spiced cauliflower taco filled out with purple sweet potato puree, chipotle boosted black beans, salsa verde and pickled red onions. It arrives in a house-made tortilla that incorporates sweet potatoes, so it has an orange-y hue. “We want the restaurant to be a vibrant place, so we want our tacos to be that way – vibrant flavors and a vibrant look,” says Carr.

“Portabellas have a meaty flavor,” says Michael Huff, culinary director of Metropolitan Hospitality Group, which owns the taqueria. That's why he chose them as the base for this meatless taco. After marinating the caps in chimichurri, they’re grilled and sliced up as if they were skirt steak. Served on a soft white tortilla, the shrooms are complemented by smoky black bean spread, charred corn, cotija cheese, fresh cilantro and another smack of chimichurri sauce.