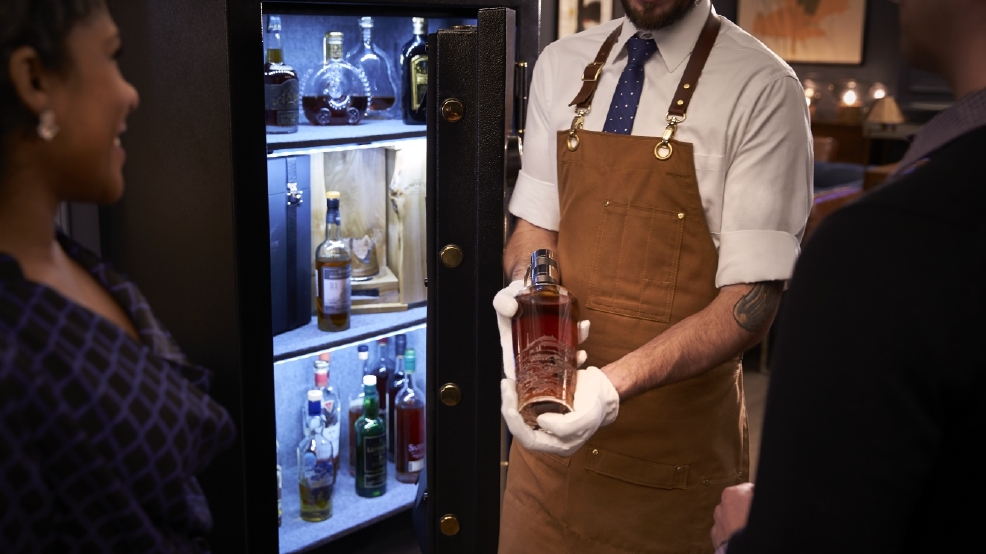 Where might a restaurant store its most expensive and exclusive spirits? In a locked vault, of course! D.C.’s Ritz Carlton Hotel just unveiled The Vault, a combination safe measuring six feet and four feet wide that houses its most precious bottles of spirits--including one über rare bottle just procured, the Bowmore 1961 50 Year Old Single Malt Scotch Whisky from Islay, Scotland. To put this incredible find in perspective: only 200 bottles of the whisky, packaged in hand-blown glass, were ever made; 50 have been issued each year for the past four years, with the last batch just released globally last December; and only a fraction of them have come to the United States. The bottle retails for a cool $23,000; on the Ritz’s menu, it’ll go for $5,000 for a two-ounce pour in a Glencairn whisky glass, or $60,000 if you want to spring for the whole bottle. Management is hoping that it sells one glass at a time so more guests get to enjoy it.

The only bottle of the whisky that will be available in D.C. recently arrived in style at the hotel in a vintage Rolls-Royce and was ceremoniously escorted to The Vault. Before it was locked up safe and sound, though, a few very, very lucky writers (myself included) were invited to view it and Instagram it, while sampling the Bowmore portfolio (ending with a pour of the 1961 50 Year Old--from a different bottle) with Master of Malts Iain McCallum. The private tastings were held in the hotel’s Library, with Frank Sinatra playing in the background to get us into that 1961 vibe, ‘natch.

Compared to the wood vegetation found in the Scottish Highlands, McCallum explained, there is much more seaweed found in the peat on Islay--which leads to a very unique aroma and flavor profile veering on the medicinal (think iodine) when a Bowmore whisky is younger, evolving to a smokiness when it’s ten to twelve years old. But when the Scotch hits fifteen or more years, an interesting thing happens: the smokiness levels off to just a waft, allowing fruit, floral and other notes to shine through.

As we tasted, McCallum encouraged me to take a bite of paired sweets with the first three whiskies. He asked me to put my hand over my glass of 12 Year Old, swirl it, sniff it and then rub my hands together vigorously; he compared the resulting aroma to “vanilla ice cream at a bonfire.” After a bite of sweet and chewy honeycomb, the whisky’s salinity was tempered and those sweet vanilla notes really came through. The 15 Year Old had been finished for three years in casks that previously held Oloroso Sherry; a taste of 80% cacao chocolate really brought out bitter chocolate and coffee on the finish. And the 18 Year Old, which initially showed savory, cured-meat flavors, evolved to burnished orange after sipping it along with a piece of chocolate-covered orange. The 25 Year Old though, stood on its own, its elegant floral notes needing no accompaniment.

With my half-hour time slot just about over, the big moment had arrived. I was presented with a Riedel tulip glass with three-quarters of an ounce of Bowmore 1961 50 Year Old Single Malt Scotch Whisky. (For those of you keeping track, that would come with a retail price of $679; and if the Ritz were selling it in that size, it would cost $1875. You could imagine why I was even afraid to lift up the glass.) But I did. And it was amazing. The smokiness was but a whisper at that point, and what had replaced it was amazing amounts of tropical fruit--most noticeably to me, guava. McCallum also pointed out a peaches and cream profile. In short, it was elegant, sensual, gorgeous. A once-in-a-lifetime tasting opportunity.

When my time was up, my tasting glasses were removed to the sitting area outside the Library, where I was invited to sign a leather-bound book of the others who have had the chance to taste this amazing whisky, and linger over the rest of my pours. Obviously, I enjoyed every single, precious, expensive drop in that Riedel glass.

Here are some other spots around town to sample high-end Scotch whisky, including a less pricier option at the Ritz:

The Next Whisky Bar