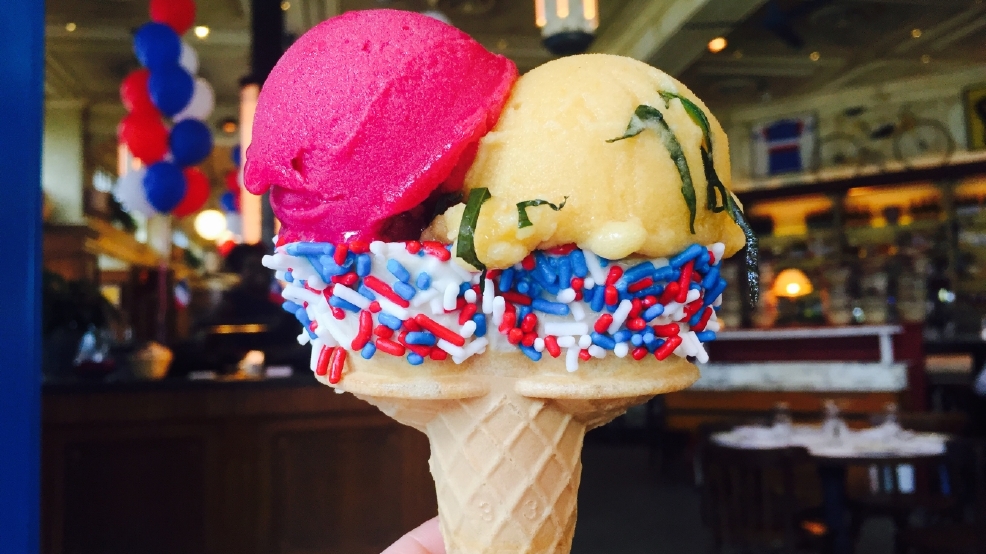 The flavors du semaine (one glace and one sorbet) are announced each week on the restaurant’s Facebook page, and served in the traditional double cone for $6. (Image: Courtesy: Le Diplomate)
SEE MORE

We don't care what the calendar says, there's still time for ice cream

Labor Day may be in the rearview mirror, but remember, it’s only unofficially the last day of summer. Fall doesn’t arrive until September 22, and with the way the weather has been in the DMV, we may find ourselves sweltering until October. But even if pesky regulations mean you can no longer dip your toes into community or public swimming holes (those of you with backyard pools--color us jealous), some of D.C.’s best pastry chefs are dipping into homemade frozen creations that will banish all thoughts of sweater weather.

Just in time for that fringe season where you’re not quite ready to pack away the shorts and tees or get the boots and leggings out of storage, the founder and pastry chef of this chic D.C. bakery has released a scrumptious menu of new ice cream and sorbet flavors. Meredith Tomason’s concoctions, priced at $5.75 for a small and $6.75 for a large, include four sorbets (yellow nectarine, yellow watermelon, raspberry lemonade and blueberry buttermilk) as well as three ice cream flavors. Caramel and dark chocolate are joined by one with sorghum, a plant native to the Southern United States that’s used in everything from a sweet pancake topper to a base ingredient for whiskey. “Our sour cream sorghum ice cream is a wonderful balance of sweet, tart and slightly smoky,” explains Tomason. “[Sorghum’s] flavor is somewhere between that of smoky molasses and a rich maple syrup.” Enjoy it all by itself, or in a peach sundae ($8) with fresh peaches, nutmeg cake, peach jam and fresh thyme. Either way, RareSweets’ frozen treats give you that endless summer feeling. “These fun flavors will help carry the summer torch a bit longer into September,” she adds. “Our ice cream will help you squeeze out every last ounce of summer until the leaves start to change.”

Rows of glace carts lining the streets are one of pastry chef Fabrice Bendano’s favorite memories growing up in Paris. He decided to bring the tradition to Stephen Starr’s bustling D.C. outpost, so now fans of fancy French frozen treats can leave their passport at home and take a quick hop to 14th Street. “The glace cart at Le Diplomate is inspired by the classic Parisian carts serving fresh-churned glace and refreshing sorbet in the classic double cone,” he says. Each weekend (Friday evenings included), Bendano’s vintage-inspired tricycle cart sets up shop on the corner of 14th and Q Streets; the flavors du semaine (one glace and one sorbet) are announced each week on the restaurant’s Facebook page, and served in the traditional double cone for $6. Upcoming flavors include macaron cassis, gianduja (chocolate hazelnut), lemon praline, apricot, basil, lime ginger, rhubarb and ispahan (a blend of rose, litchi and raspberry.) And Bendano promises that it’ll be out that each weekend as long as the weather is warm. (Fingers crossed for a November heat wave.)

This luxury hotel pays homage to our third President in many ways, from its book room to the collection of Madeira -- a fortified wine from an island off the coast of Portugal that was one of Jefferson’s favorites. This season, says pastry chef Fabrice Leray, why not ice cream? “Thomas Jefferson’s vanilla ice cream recipe has been circulating for years,” says Leray. “It was the first known vanilla ice cream recipe in the U.S. and the first ice cream served in the White House.” (And, he adds, TJ’s version eschews the typical half milk to half cream ratio; his unapologetically rich and flavorful dessert is made entirely with cream.) The Jefferson is using the ice cream in a patriotic dessert ($14) with red raspberries, blueberries and whipped cream. And, if you are looking for a liquid pairing, wine director Jennifer Knowles recommends the 2012 Michael Shaps Cabernet Franc Raisin d’Etre, which hails from Charlottesville, of course.