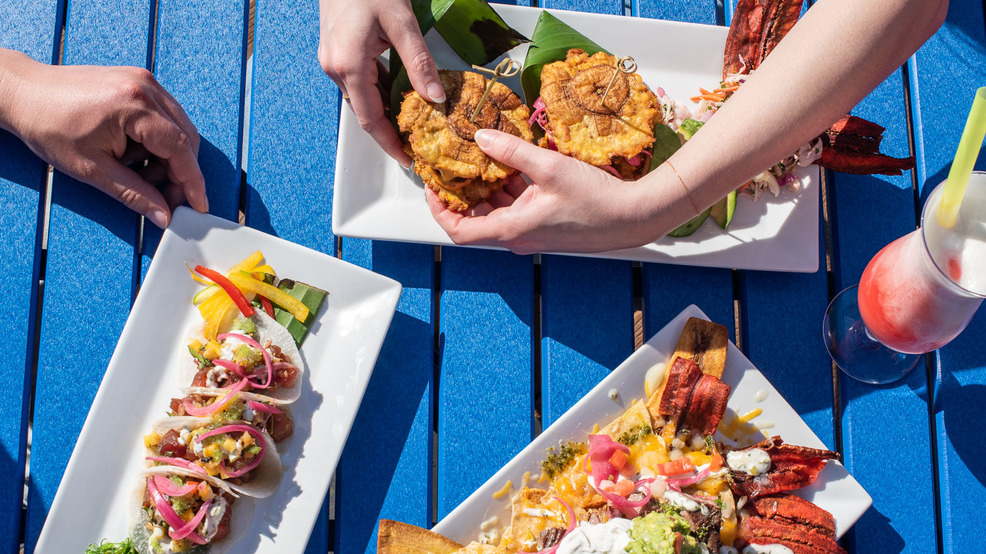 If you can’t head to the islands this summer, revel in their sunny flavors by indulging with a meal at these new tropical-inspired restaurants.

Over the course of his career, Trinidadian born chef Peter Prime has witnessed an increasing interest in the food of his homeland. He finally got to partially showcase his roots at Spark, which earned the restaurant critical raves and a Michelin Bib Gourmand award. Feeling confident diners were ready to embrace even more authentic Trini flavors, he recently opened Cane on H Street NE. “It’s really an evolution of my cooking,” he says. “I went out and experienced so many different cuisines and then brought everything I learned back to the cooking I grew up with.” The menu is rife with childhood favorites, such as doubles (fried flatbreads) topped with Indian-influenced, cumin-rich chickpeas (channa masala), grilled oxtails and pepperpot, a rich stew packed with brisket and beef tendon. Those who want to fire up their meal can dash on the house-made hot sauce forged from scotch bonnet peppers. Now that’s a true taste of Trinidad.

Chef-owner Adam Greenberg has one goal: to make people to feel like they’re at the beach. His Hawaiian vibed, flora packed eatery with a Miami Vice color scheme a couple of blocks from Union Market gives diners the impression they’ve been transported to an equatorial isle even before the food hits the table. But once the dishes start arriving – roast chicken brined tender in coconut milk, shoyu kissed tuna poke, and a clever patty melt packed with spam and edged with furikake – they’ll really start thinking they’re on Oahu’s north shore with a view of the crashing surf. Despite the vibrate South Pacific flavors, Greenberg isn’t an islander. “The number one question my servers get is, ‘Where is your chef from?’” he says. “And they say, ‘Connecticut.’” But he evokes oceanside flavors and traditions so well, he’s earned the honorary title of son of a beach.

To figure out the concept for his new restaurant, Ryan Fichter stood on a corner in Dupont Circle last year and polled more than a thousand passersby: Fried chicken, tacos, or gourmet doughnuts and coffee? Tacos were the resounding winner, but the chef – who cut his teeth at Thunder Burger & Bar and the now-shuttered Rialto here in D.C., as well as the Royal Kona Resort on the Hawaii’s Big Island – didn’t want to do a straightforward taqueria. He decided to draw on his time in the Aloha State to create a menu highlighting the archipelago’s flavors and traditions with a few nods over to the Caribbean. Tortillas come packed with sunny options like mango salsa topped jerked chicken, rich shreds of pork offset by pineapple salsa, and coconut shrimp. (A special featuring fried soft shell with a zingy Old Bay aioli is another standout, though is origins are obviously more local.). There’s poke, of course. One iteration features tender cubes of ahi tuna or salmon tossed in a zingy mix of ginger, scallions, onions and plenty of crunchy sea salt. To finish, go with the shaved ice with a rainbow of syrups to choose from, including guava, mango, and passion fruit. Pros know to order theirs doused with condensed milk, like they do it in Hawaii.

The hyper-colorful rooftop eatery on Barracks Row is alive with palm trees, flicker lit by tiki torches and fire pits at nighttime, and soundtracked by laid back reggae tunes. The menu at the breezy, beachy boîte features favorites from an array of sunny ports – from conch fritters and ceviche served in a coconut to an ahi tuna poke tower and jerk chicken. James Abbott, marketing and beverage director for Hill Restaurant Group, which owns Tortuga, calls the sea-spanning cuisine Flori-bbean. When it comes to the drinks, frozen cocktails (with a paper umbrella stuck into their icy depths, of course) reign supreme, complemented by a strong selection of oceanside favorites, including plays on the Dark ‘n’ Stormy, Mojito, and Mai Tai. Nearly two dozen rums line the shelves behind the bars, sourced from tropical climes: the Lower Antilles, Puerto Rico, the Dominican Republic, and beyond. Currently, they’re aging and infusing rums in house with an eye to start pouring them this summer. No matter what you’re drinking or eating, the restaurant is designed to help you chill out. “Just forget you’re in D.C. and chase the sun,” recommends Abbott.

Chef Raynold Mendizábal made a name for himself when he launched Silver Spring’s Urban Butcher in 2013. His second effort is a loving homage to his homeland that serves up mostly traditional takes on Cuban food and drinks. Best bets include guava sweetened baby back ribs, braised tender goat on polenta-like corn casserole, and fries with an irresistible smoked chili mayonnaise that you’ll wish they bottled so you could take some home. In the mood for a cocktail that doubles as Instagram bait? Order the fresh coconut, its top lopped off and plenty of rum poured in. Whether you’re drinking or not, the space cultivates a festive atmosphere. Garage door siding swings up to let in the breeze, while letting the music, chatter, and smells from the kitchen waft out to entice those passing by.