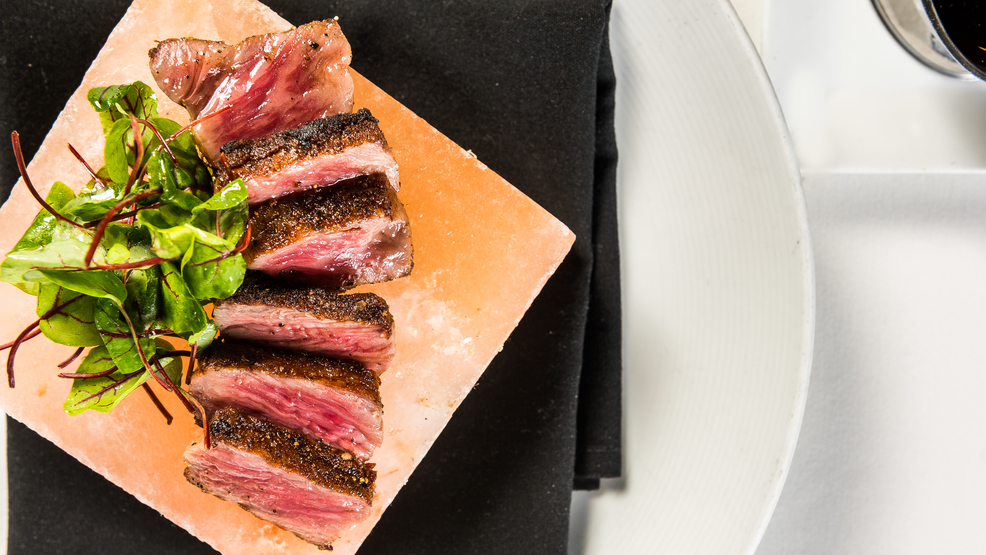 Chef Mike Ellis&nbsp;speedily sears a three-ounce portion on the plancha and serves it on a Himalayan salt block along with a citrus-y red veined sorrel salad and a soy-dashi dipping sauce that has a understated wasabi wallop. (Image: Courtesy Charlie Palmer Steak)
SEE MORE

You need to try these 4 new cut above steak dinners

D.C. has a longstanding reputation as a city that loves steak. Though we are by no means a mere meat and potatoes crowd, there’s still a hearty appetite for beef. The next time you’re feeling carnivorous, you need try one of these winner, winner steak dinners.

Chef Raynold Mendizabal believes the bone-in ribeye is “the quintessential steak,” but he adds a new twist on the old favorite. He begins by sourcing pasture raised, grain finished Angus beef from the Shenandoah Beef Coop. As it dry ages for 60 days or longer in the meat cellar, he rubs the cut with the probiotic molds that develop on his salamis to add umami oomph. Finally, it’s packed in salt for a few days to allow the complex flavors to permeate all the way through. After it’s cooked, the steak is topped with a pat of smoked butter to contribute a layer of hazy savoriness. Mendizabal advises complementing it with a side of truffled mac ‘n’ cheese.

“Beef is seasonal,” explains executive chef Mike Ellis. “At different times of the year, you get higher quality beef from different parts of the country.” That’s why he’s getting his A5 Wagyu from Japan’s Gunma prefecture in the central region of the main island, while the last batch came from the Iwate prefecture at the island’s easternmost tip. He speedily sears a three-ounce portion on the plancha and serves it on a Himalayan salt block along with a citrus-y red veined sorrel salad and a soy-dashi dipping sauce that has a understated wasabi wallop. He likes eating the buttery beef that practically melts on the tongue with a thicket of crispy French fries, which add a nice textural contrast.

Executive chef Ryan Ratino calls it the “old ass entrecote,” because the hearty cut designed for two diners has been dry aged for at least 65 days. The meat is lavished with an onslaught of umami – kombu, mirin, shiitake, and soy sauce – before it’s grilled over Japanese binchotan charcoal. All this adds up to create a steak that boasts plenty of funk and rich earthen undertones. Sliced and splayed out on a platter to emphasize the pretty pink centers, it arrives with roasted mushrooms and spring onions, as well as squares of crisp golden potato pave. “It’s an homage to the steak dinners that my father loves,” explains Ratino.

There’s enough meat for two or three diners on the 50-ounce double bone Union Chop. Renowned butcher Pat LaFrieda provides the beef, which executive chef Marc Hennessy dry ages for 35-40 days. “This intensifies the beefiness and gives it a muskier, mustier flavor,” he says. “It adds a bold richness to it.” He rubs it down with a mixture of butter and rendered beef fat. Charbroiled at 1,800 degrees, the oversized cut is rested and reheated for service. Sliced in the kitchen, it gets garnished with butter, whole cloves of roasted garlic, and fried sage. For sides, Hennessy recommends pommes dauphine, roasted cauliflower spangled with sultanas, and Japanese brown rice and house-made noodles cooked in turmeric broth (consider it an upscale rice-a-roni).