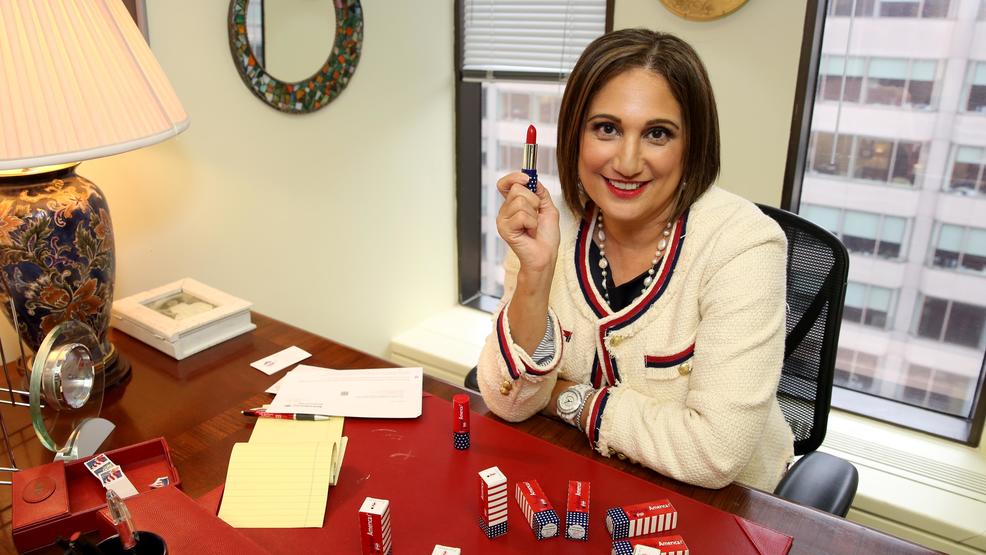 This woman wants to pay off the national debt, one lipstick at a time

In Randa Fahmy's Connecticut Avenue office, memorabilia from her decades-long career in politics line the wall. In one photo, she’s arm-in-arm with Condoleezza Rice. In another, President George W. Bush is talking to her then-3-year-old daughter - at the time, Randa was associate deputy Secretary of Energy.

Randa left the White House in 2003, but she works as a consultant and her desk is still covered in important-looking documents. However, unlike most consultants, her workspace is cluttered by lipstick tucked into starred-and-striped boxes.

Randa launched her own cosmetic line, ‘Makeup America!’ in February 2017. Currently, she sells seven lipsticks, two lip treatments and five nail polishes on the brand's website, but hopes to expand her offerings soon. The lipsticks retail for $17.76, a nod to the Declaration of Independence.

Beyond spreading beauty, Makeup America! has a unique purpose. For each unit sold, Makeup America! will donate $1 to the Bureau of the Fiscal Service to pay down the national debt. Although it’s increasingly common for makeup brands to do social good, Randa believes that her makeup line is the first to tackle the politically thorny issue of national debt, which stands at $20,153,567,885,894.27 as of September 15, 2017.

Randa’s love of the United States and makeup are both rooted in childhood visits with family in Egypt and Iran. However, she only started more seriously pursuing her makeup line in February 2016.

Randa was increasingly disenchanted with politics as the Republican party struggled with 12 presidential hopefuls, so she took a closer look at the beauty industry and sought a way to give back in a way that aligned with her ideals.

It may seem improbable that a makeup line could have an impact on the economy, but according to Forbes the beauty industry is currently worth $445 billion and is growing about 3% every year. Despite Makeup America’s limited offerings, their products are making a splash, and with good reason. In addition to well-received products and cute packaging, every Makeup America! product is made in Texas, cruelty-free, paraben-free and non-GMO.

One of the most popular items is a red lipstick called ‘Independence,’ which has a blue base that makes teeth look whiter, but the color pay-off is strong red and it comes in both matte and cream finishes. Another winner is 'Gold Standard' - a gold-flecked cream lipstick that can be layered over lip stains or a matte liquid lipstick.

The brand is also keeping up with the color- changing lipstick trend with 'Lady Liberty' and 'Star Spangled,' which work with your skin’s pH to create either a blue or red-based hue, respectively, customized to your body chemistry.

So far, Randa has sold about 2,000 units - far from the nearly 6,200 individual makeup products per American that would be required to completely eliminate the federal debt. However, Randa decided to donate money from Makeup America! back to the federal government because she believes it’ll lift up other women - even if her contribution just chips away at the national debt’s interest payments.

In addition to ensuring the survival of these social programs, Randa argues that paying down national debt will stimulate the economy to benefit more women too.“If you look at, for instance, small business loans. [Women are] not the majority, but a lot of women take out [these loans] a rising debt means higher interest rates,” she said.

Randa also believes that paying down the debt would have a positive effect on the interest rates on student loans - which would be good news for college students, of which women are a majority.

“People think Washington’s going to solve it, and I can tell you right now they’re not.”

Some economists may disagree with Randa's cause and the possible outcomes of paying down the national debt. The government has only ever paid off its debt once, in 1835, and most historians believe it played a major role in creating an economic depression that started two years later.

However, Randa's personal sense of patriotism and personal history is undeniably present in Makeup America. "I want to be that kid again, riding around my neighborhood screaming 'Happy 200th birthday, America!' with bright red lipstick on."